If you’re looking for something simple and comfortable to cycle to and from work, there’s no need to spend a fortune.

There are plenty of cheap bikes available which can do just as fine a job in serving you on your commute. Good cheap bikes won’t be state-of-the-art by any means, but that doesn’t mean affordable bikes can’t get the job done for you as efficiently as others.

Below, we’ll look at five which could all claim to be the best commuter bike under £300 currently on the market, including cheap fixie bikes, which are a good commute bike due to their simplicity, the hybrid commuter bike and a comfort bike. If you’re looking for cheap bicycles for commuting, we’ve got you covered here.

How to Find the Best Budget Commuter Bike for You

There’s such a wealth of choice in this regard that, especially for newbies, it can be difficult to differentiate between them and decide which is the best cheap commuter bike for you.

Indeed, it’s worth mentioning that there isn’t one specific type of bicycle commuters use – especially since the coronavirus pandemic triggered a ‘cycling boom’, you’ve probably seen people riding to work on mountain bikes, road bikes or even hybrid bikes.

Here, we’ll talk about the best places to find cheap new bikes for commuters, and hopefully give you some clarity in your mind as to what you’re looking for, and where you should be looking.

But first, a side note. Don’t turn your nose up at second hand bikes, either (as long as you’re sure they’ve not been stolen, anyway!). These may not be all new and shiny, but you don’t need them to be to get you from A to B every day.

What to Look for in an Affordable Commuter Bike

Before you start shopping, have a think first about how you would answer these questions:

Below we’ll take a look at five of the best commuter bikes that you can find today for under £300. These are simple, efficient bike that are pretty cheap, but will help you get where you want to go without any trouble.

We’ll start with one of the best budget hybrid bikes money can buy. This Riverside model, costing comfortably under £200, is great for commutes of short to medium distance, but is also the first bicycle enabling you to switch from urban to rougher terrain with no fuss at all.This was actually the first commute bike I bought and it served me well for several years.  One of the best cheap bikes there is. Indeed, this will almost certainly be one of the cheapest new bikes you can find.

It also boasts a six-speed grip shifter, a height-adjustable stem, and unisex frame, so will suit no matter what your height or gender is.

And that’s not all. Its saddle is a welded steel seat post, ensuring you’ll be even more safe on this low price bike as you embark on your commute. One of the best value bikes out there. 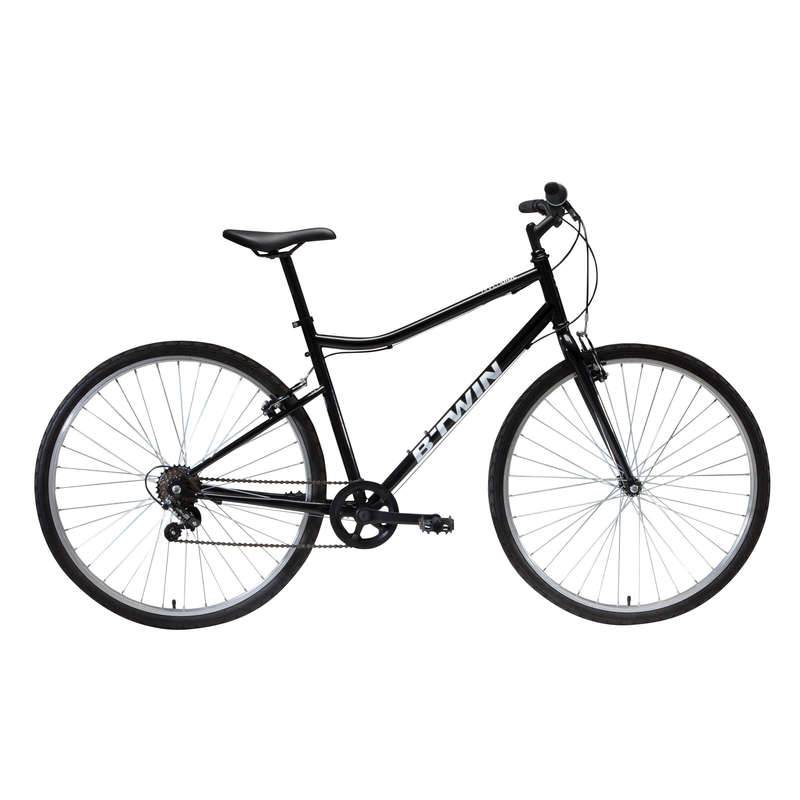 Next on our picks for the best beginner commuter bike: if you’re looking for a commuter bike that can do a bit of everything, this Pinnacle model is the way to go.

Its heat-treated alloy frame is lightweight enough to keep you comfortable, but sturdy enough to feel you’re in control, while it also boasts accurate, reliable seven-speed gear shifting capable of taking on the steepest of hills.

Plus, it possesses powerful alloy V-brakes which you’ll always feel in control of, while its Deli 700 x 38c City Tyres offer much in the way of traction. It’s also compatible with mudguards, for those commuting in less accommodating conditions.

This isn’t a commuter bike specific to men, either – there’s also a lush women’s model just as good for the same price here. A trusted brand that's a made a solid entry-level commuter bike.

A nippy hybrid bike with powerful brakes and seven gears.

Need something a little sturdier to embark on your tough commute? This Coyote hybrid is a great entry level commuter bike, and should have everything you need and more.

Its 18-speed gear shifting should make navigating those hills a breeze, while its trekking tyres only facilitate riding off-road or on uneven terrain.

Its powerful V-brakes can bring you to a halt almost instantly no matter where you are, while there’s also Steel Lo-Rise handlebars for extra visibility, and a hybrid-specific saddle for that extra slice of comfort. Boasts 21 gears and solid trekking tyres that reduce the chance of getting an unwanted puncture.

For the commuter who wants to look the part, this Van Tuyl Lunar N7 men’s bike is the best cheap city bike going – now that it’s been reduced by a massive £500, anyway.

With a smooth performance and a relaxed upright riding position, comfort won’t be an issue when cycling on this affordable commuter bicycle. It’s perfect for urban commutes, but also for leisurely city cycles, too.

But don’t think it’s all style and no substance. It’s equipped with a strong but lightweight aluminium frame, as well as powerful roller brakes and lights, simple seven-speed gear shifting, a rear pannier rack, and mudguards, too.

Without doubt, it’s up there as one of the best cheap urban bikes going. Best Hybrid Bike under £300 for Commuting

One of the best urban bikes for any kind of commute

Last but not least on our list of cheap city bikes is a design which has got the lot: this B’TWIN model comes with built-in lights, mud guards, a rack and so much more, making it one of the most impressive commuter bicycles available, as well as being extremely affordable.

A sturdy resilient bike that can handle smoother, urban roads and rougher pathways, they’re even better, in fact, for longer journeys of more than about 10km, and their 21-speed gears mean they can handle any surface with ease.

Whatever type of commute you find yourself on, this B’TWIN bike is sure to make it a whole lot easier for you. I’ve actually been riding the previous iteration of this bike for the past four years and I love how practical it is. It can handle any surface and I love the fact that it has dynamo lights built in so I never have to worry about cycling at night. Definitely one of the best budget hybrid bikes around. 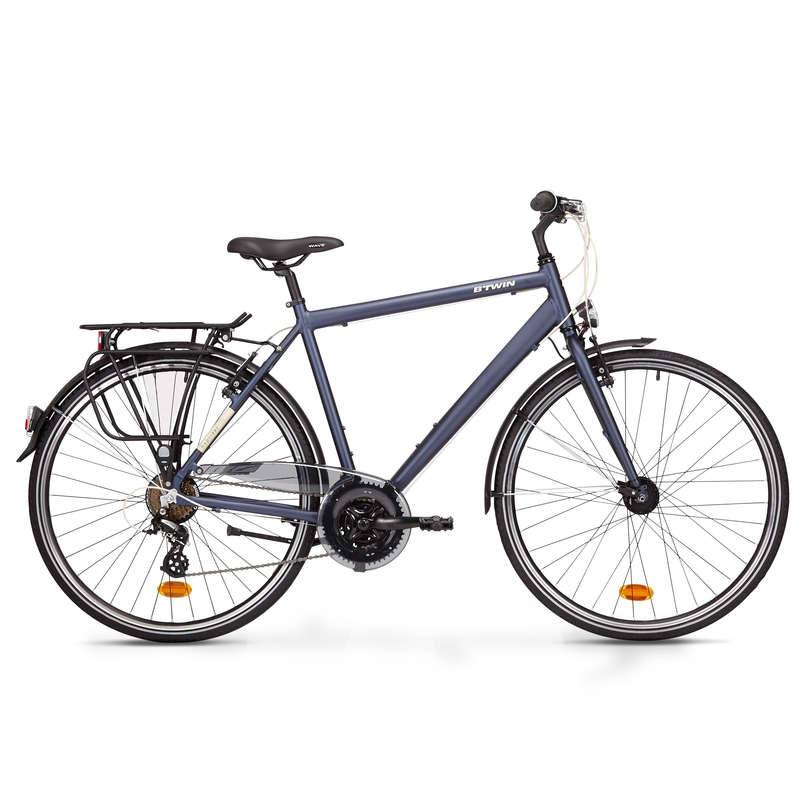 A cheap and cheerful bike from Decathlon that is ready to go. Has a built-in pannier rack as well as automatic self-charging Dynamo bike lights.
A great all-round for commuters.

What is a commuter bike?

A commuter bike is a bicycle tailored to helping you cycle to work and back with the minimum amount of fuss.

What type of bike is best for commuting?

That really depends on factors like your personal fitness, or the route you’ll be taking. Electric, hybrid, folding, road and mountain bikes, for instance, can all make great commuter bikes.

How much should I spend on a commuter bike?

Not much at all if you don’t want to. You probably aren’t looking for a state-of-the-art bicycle to get you to work and back, so cheap commuter bikes can still prove just as worthwhile. Whether you’re looking for the best city bikes under £500, £400 or even £300, you should still find excellent value for money.

What makes a good commuter bike?

One that suits you. That might mean a folding bike if you need to also take the bus or train to work, a more durable bike if you cycle off-road, or a more stylish model if the look is important to you. One thing a good commuter bike must do, though, is provide a high level of comfort.

How to dress for cycling to work?

However you like. You basically have three choices: 1) wear sporty gear and then get changed and shower at work; 2) wear normal clothes and take your time to avoid getting sweaty; 3) go the Discerning Cyclist route and wear stylish clothes with discreet cycling functionality for a smooth and comfortable ride, without the need for a spare wardrobe.

Best Clothes for Cycling to Work:

Essentially, though, it’s again dependent on personal circumstances – such as the climate you live in, or how much of your commute is spent on dry cycle paths or boggy, uneven terrain.