LIVALL MT1 vs BH60SE Comparison: Which Bluetooth Helmet is Best?

Want to feel an extra bit safer while out on your bike? Want to listen to music while you ride? Want to be aware of statistics like your speed and heart rate as you cycle? Well, if any of this appeals to you, it might be time to invest in a smart bike helmet.

Here, we’re going to review two relatively affordable models from LIVALL, the self-proclaimed ‘future of cycling’ who boast all sorts of smart helmets to suit all sorts of cyclists, and who launched the first of its kind back in 2015.

But first, a bit more on why smart bike helmets are the way forward:

What Can Smart Bike Helmets Do?

Primarily, they can enhance your safety while cycling. Some smart bike helmets come with built-in sensors and safety lights, which will be especially useful, of course, when riding through the night or those dark winter mornings.

Others are made of special protective material to keep your head extra secure, and may also include additional perks like indicator lights to save you having to use your left or right arm, and speakers for making phone calls.

Some smart helmets can also be connected to an app to collect data like your speed and heart rate, so there’s no shortage on advantages to these state-of-the-art pieces of kit.

A Bluetooth helmet can also offer so much more than just protection while out on the road, with none of their extra features come at the cost of your own safety, either.

Whether it’s for listening to music, audiobooks or podcasts, or whether you need GPS navigation to help you find your way, that extra slice of connectivity will come in handy if you’re a regular cyclist.

In addition, it takes approximately three hours to fully charge, can last for up to six hours, and its maximum Bluetooth connectivity distance is 10m.

Now, let’s have a look at just what makes it such a popular choice.

This black smart helmet boasts not only two in-built premium Bluetooth speakers, making it easy to listen to high-quality audio, hear GPS navigation directions and make phone calls hands-free, but it comes with a bunch of other useful features, too.

Its smart LED lights offer wireless left or right turn signals, which are noticeable from some distance for other drivers. You’ll be more visible on the road as a result, which can only make you even safer – not to mention this comprises eight full-colour LED tail-lights and three left/right-turn signal lights. You’ll be impossible to miss.

What’s more, its SOS alert system will no doubt come in handy in the unwanted event of an accident – simply connect helmet with LIVALL’s official app, turn on helmet emergency signals, and SOS signals will be immediately sent to your emergency contacts on impact.

How does this work? Well, an in-built three-axis gyroscope triggers an SOS alert on your phone which is then sent to your designated emergency contact as well as your GPS location. Of course, no device is a total failsafe, and you shouldn’t rely on any helmet, including this model, to detect every accident, but it’ll certainly do the best it can to help you in your hour of need.

And if that wasn’t enough, how about a mention for its Smart Bling Jet controller on the handlebar: when paired with the helmet, this can answer calls, take photos, control your music player, use the walkie-talkie function and more for you, so you don’t have to be distracted as you riding. It’s essentially a remote control for cycling. 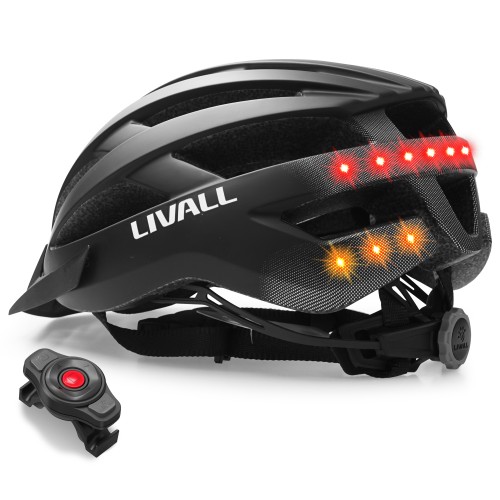 Also features LIVALL's SOS function which contacts your emergency contact if you have an accident.

It also comes with an 18-month warranty, weighs even less than the MT1 at 280g, and is available in one size of 55 – 61cm. You charge this smart helmet via micro USB cable, and its maximum Bluetooth connectivity distance is 10m.

So, what are the main selling points of this model, then?

This is another multi-functional lightweight smart helmet that will keep you highly visible with concealed LED smart lights and indicator turn signals (only visible when activated), as well as highly connected, as you’ll discover below.

And if you are in a predicament, it also boasts a built-in three-axis gyroscope, which will activates an SOS alert on your phone that is sent to your emergency contact along with your GPS location.

On the whole, then, it’s pretty similar to the MT1. Lots of useful features, perhaps not much special in the way of material or build, but sturdy enough to do the job. Though, it should be pointed out that many reviewers have noted a disappointing sound quality and weak battery life as its pitfalls. 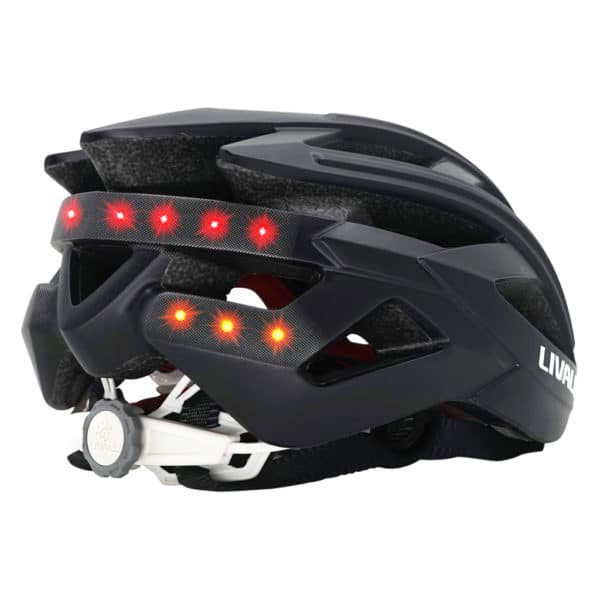 A helmet with rear lights, indications and built-in Bluetooth and speakers so you can make calls and listen to music. It protects your head too.

Truth be told, there isn’t much between these two smart helmets. They’re the same affordable price, they offer much of the same ‘smart’ functions, they both improve your visibility and safety on the road.

We’re going to go with the MT1, though; despite being heavier, it is the more consistent and the more reliable of the two, especially if you’re a regular cyclist or a mountain biker. That’s not to say the BH60SE would not also be astute purchase, though.

But which do you prefer? Have you found the lighter weight of the BH60SE works to your advantage? Are the sound quality and battery life better in your experience than many have given credit for? Let us know in the comments.