When it comes to bike accessories, there’s stuff you use and stuff you don’t.

Every now and then a new invention pops up that seems really cool – and it usually is – but the truth is, after a couple of rides, you just stop using it.

Life tends to follow the path of least resistance and cycling is no different. If you can ride without it, you will.

Bicycle indicators, I’m looking at you. Handlebar cup holders, you too.

Welcome to the graveyard of cycling novelty items.

But with regards to my latter example, why is that so?

Probably the thing that has prevented bike cup holders from being common place is that most people cycle with a bottle of water, which are more likely to be placed in a bottle holder on the bike frame (if you have one), or in a bag if you don’t (which I do).

Meanwhile, if you want to carry an “open” drink (i.e. a cup of coffee) the more prevalent issue is that it’s going to spill everywhere.

But cyclists are notorious for their love of coffee. And for anyone cycling to work, a portable brew would surely be of great value.

So maybe a bicycle cup holder that actually works, would provide real value to bike commuters.

Which brings me to Handlestash.

Most handlebar cup holders that you see for bikes are pretty simplistic: an aluminium disc bolted on to the handlebars. Beautifully minimalistic perhaps. But functionally futile.

They might work to a degree if the drink is bottled, but there’s still a significant risk of it bouncing out of the second you smash into a hefty speed bump (yes, I’m speaking from experience).

That’s where Handlestash’s Shock-Absorbing Bike Cup Holder is different. It’s built to handle the terrain, without covering yourself in coffee.

How Does Handlestash Cup Holder Work?

The Handlestash can be easily attached to your bike handlebars that to it’s quick-release clamp. But if you’re worried about it getting nicked, then it also comes with a secure bolt which you can use instead.

But where Handlestash gets really interesting is how it holds drinks securely in place. Well, I say “securely”, but in a way it’s the opposite.

The opening of the Handlestash is 8.2cm (3.25”) in diameter, but it is extremely adaptable in what it can hold. The surrounding container is made from built-in elastic, so it can easily adapt to cups or bottles of many sizes. Bigger, heavier bottles will sit deeper than a small cup, keeping them more secure.

And aside from the rigid opening, the rest of the Handlestash moves freely, which – counterintuitively – reduces the risk of spillage.

Basically, the Handlestash will move around to reduce the impact of any bumps as you ride. Where as a rigid container would result in the liquid moving, this cup holder instead absorbs the shock, enabling your cup to stay relatively in place.

As well as the elastic sides of the Handlestash, the bottom is also made of mesh, to further absorb any impacts, while the opening has an elastic cinch so that narrower drinks container (e.g. those Red Bull-type cans) can also stay in place.

But I should make this clear, this isn’t a perfect “no spill” bike cup holder, as my test shows…

In order to see the limits of the shock-absorbing Handlestash cup holder, I embarked towards the biggest speed bump in my neighbourhood, which is conveniently found at the bottom of a steep old hill.

I took four types of drink containers: a 330ml can, a small coffee cup, a metal water bottle and a beer bottle.

Now, although there was a few small spillages (which I’ll come to shortly), all of the containers stayed snugly in place upon hitting the speedbump at a fair pace – including my prized LARQ bottle which had seem an ancestor perish at that very spot two years earlier.

For each drink, I opened the container, had a sip and them put it in the Handlestash prior to launch – meaning each was pretty much full.

The coffee cup had the most spillage, but it was only a bit spilling out onto the lid. I’m sure if the cup had been less full, it would have made it through unscathed. The Coke can had a similar destiny, but the beer bottle came through with flying colours, with not a drop being wasted.

So, while this isn’t a perfect “no spill” bike cup holder. It’s very close.

Indeed, if you’re not hitting big speed bumps at pace and your cup isn’t full to the brim, I would be very happy to carry a cup of coffee on the way to work in the Handlestash.

And ultimately, that’s what this bike cup holder is for – it’s for casual drinks (e.g. coffee, soft drink cans or even a cheeky little beer on a Friday) for casual riders pedalling around their city.

At $38/£33, there are certainly cheaper bike cup holders out there.

But if you want a cup holder that you can actually trust and use, then opting for the Handlestash is actually a no-brainer. This is our #1 rated bike cup holder by some distance.

Other bike cup holders I’ve seen previously fall into the “novelty bike accessories” bracket. But this is the first bike cup holder that I’ve come across that is actually useful and I will use frequently.

As an added bonus, it also comes in lots of fun colours. I, naturally, opted for “Discerning Cyclist” orange. But it also comes in bright green, pink, yellow and, of course, plain old black – as well as some other fun colours. All-in-all, it’s safe to say that if you like to have a drink handy while you ride, the Handlestash Shock-Absorbing Bike Cup Holder should be your go to choice.

⚡Discerning Cyclist exclusive: get 10% off Handlestash this week when you click on the link below⚡ 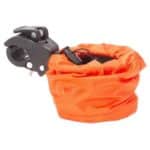