LARQ Review – Is the Self-Cleaning Water Bottle Worth £109?

I’m a sucker for a Kickstarter.

And it’s no secret that Kickstarter and IndieGoGo projects are a bit of a lottery. For every cool gem I get to enjoy, there’s a big steaming turd delivered through my letterbox 18 months late.

However, when I saw a beautiful looking “self-cleaning water bottle”, I was intrigued and, of course, backed it.

I like having a water bottle with me as part of my day-to-day carry. After all, drinking enough water is absolutely vital to keeping energised and staying healthy.

But I don’t want to be adding to the global waste crisis by buying single-use plastic bottles, while other “reusable” bottles seem to get stinky pretty quickly and really need a drying out period of at least a day once they’re washed.

So… LARQ: The sexy self-cleaning water bottle – is it a gem or is it a stinking piece of…

If absolutely nothing else, the LARQ bottle is a thing of beauty. It’s packaged beautifully too when it arrives and certainly feels like a premium product.

I mean, just take at these things.

Once my LARQ bottle arrived and had gotten over how aesthetically pleasing it was, I charged it up and put it to use.

Now, one of the main reasons I bought this bottle was because I live in Spain and the tap water is patchy at best. It shouldn’t make you sick, but it doesn’t taste good and can occasionally carry a questionable odour – hency why most people stick to drinking bottled water.

I had initially hoped that the LARQ bottle would miracously make this dodgy water tasty. Unfortunately, it doesn’t really change the taste. However, it does provide you with peace of mind knowing that it will kill off any viruses and bacteria.

The bottle “cleans” the water automatically two hours by beaming a UV-C LED light (stored in the cap) through the bottle’s contents. You can also manually launch the light be pressing the button on the top of the cap. When the UV-C light is activated, a glowing blue light at the top of the lid is activated. If the battery is running low, it will flash yellow instead, while a red light indicates that battery life is at its end.

So, despite the LARQ bottle not making Spanish water “tasty” was I still happy with my purchase?

You bet I was.

This bottle goes everywhere I go. Literally. It’s next to my bed in the morning, I take it with me to my co-working space during the day, it’s by my side in the gym in the evening, and it’s the last thing I drink from at night.

The main benefit of this bottle is that you don’t need to clean the inside ever. Seriously. I’ve had this bottle (well bottles – I’ll get to this in a minute) for over a year now and it’s not been washed once – and it doesn’t stink in the slightest.

[NOTE – I do clean around the mouthpiece sometimes, as this isn’t reached by the UV-C light]

I’ve also found that reusable water bottle start tasting/smelling a bit manky after a few months of use, regardless of how often it gets washed. So, for me, the LARQ bottle has resolved this issue and leaves me assured that I’m drinking clean water.

After a few months of non-stop LARQ bottle use, I had a disaster.

I was cycling into town one day when, just after hitting a hefty speedbump at the bottom of a hill, I heard and almighty crash following by metal on concrete skidding noise.

At first I was confused as to what it was. Then I saw my bottle continuing to skate down the hill.

By the time I caught up with it, it looked battered.

And after pressing the button to see if it still “functioned”, I got the red light of doom.

The point of purchasing this expensive water bottle was that I’d be able to use it for years – thus making it a more reasonable purchase in the long term in lieu of buying more water bottles.

It was partly (largely) my fault, of course. I’d put the bottle in the exterior open pocket of my Chrome Mazer backpack and, suffice to say, the pocket wasn’t grippy or sturdy enough to keep the bottle in place after such an impact.

In a state of dismay and very much not keen to spend £90 on a replacement bottle, I emailed LARQ to tell them my story.

Amazingly, they got back to me and said that they would replace my bottle FREE OF CHARGE.

Now this is customer service. LARQ – thank you.

A week or so later I got my LARQ replacement bottle and vowed to take better care of it.

And I have… mostly. Although I did drop it again one time and have fair old dint one on side of it – but it still works flawless. Ah well.

How Does the LARQ Bottle Work?

If you’re looking for an easy-to-clean water bottle. You won’t find anything easier than LARQ’s bottle.

So, if you’re not planning on throwing this beautiful bottle down concrete hills, how does it actually work?

Well, the lid of the bottle contains a UV-C LED light. This is a 280 nanometer UV light that, once triggered, eradicates germs inside the bottle through a photochemical reaction that destroys the DNA of the germ. This is the same technology used to clean many modern hospitals.

The bottle’s UV light is automatically triggered every two hours to keep the bottle constantly clean, while you can also press the button to trigger it at any time.

What’s more, if you press the button twice, you’ll trigger LARQ’s “adventure mode”, which will basically give your bottle an extra good clean – perfect if you want to drink from more questionable water sources such as rivers.

How Dirty Are Reusable Water Bottles?

Is the LARQ Bottle Worth It?

Obviously, £109 for a water bottle is crazy expensive on the face of it (although they do have a “cheaper” model for £78).

But if you’re regularly buying plastic bottles of water, you may actually be saving money. Say you’re buying just one bottle of 50p water every day for a year, you could have bought two LARQ bottles for about the same price.

Likewise, my previous “reusable” water bottle endeavours tend to become somewhat unusable after a few months of incessant use – meaning I, again, over a longer period of time would end up spending more money.

For me, I want one easy bottle that I take everywhere with me. And, for that reason, the LARQ self-cleaning bottle is my perfect companion. Just don’t throw it down a hill. 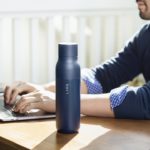