The biggest barrier to increasing the number of journeys by bicycle is perceived safety.

The easiest way to improve safety among cyclists is to create segregated lanes for bicycles.

And if you have any doubt that we should be increasing the number of journeys by bicycle – and therefore bike lanes – read on as to why more bike lanes are good for EVERYONE (including drivers). 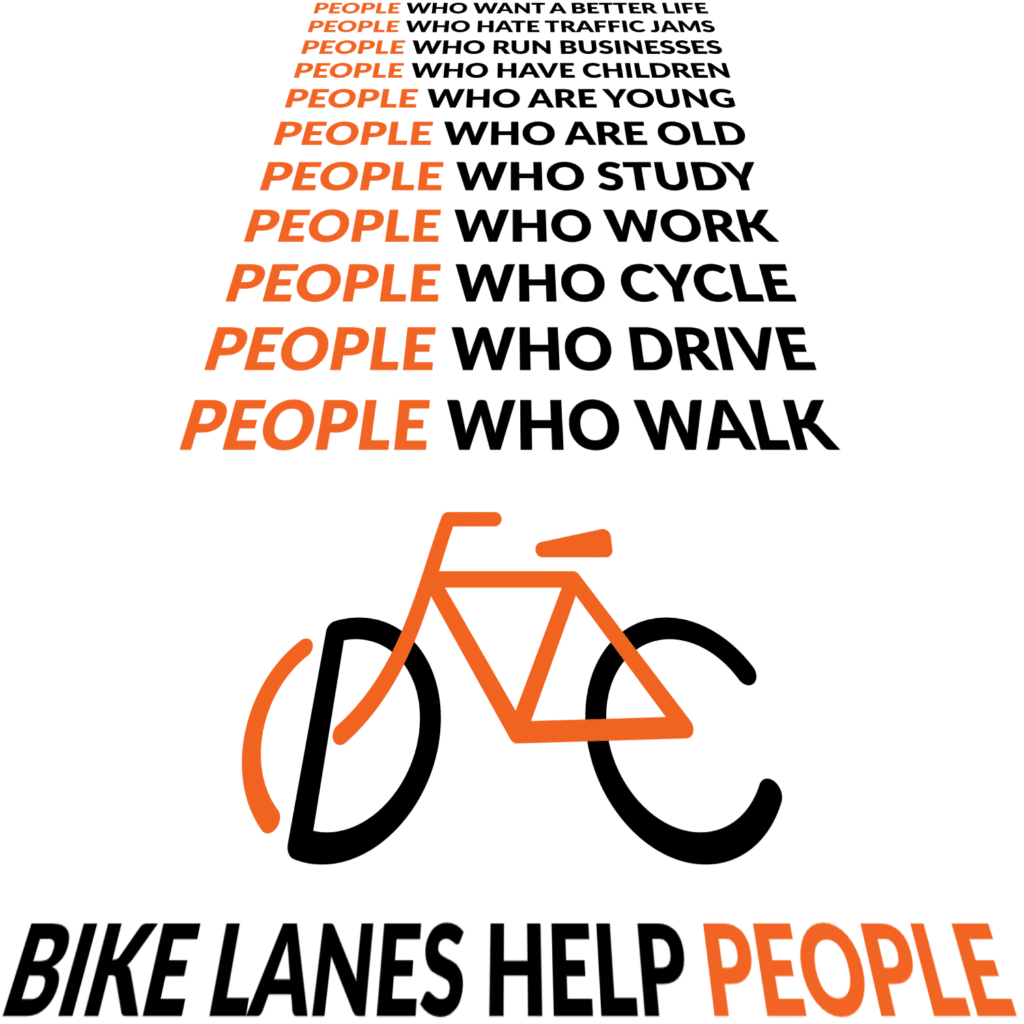 One of the most obvious perks of good cycling infrastructure is that more people get out on their bikes and, therefore, are more likely to be healthy as a consequence.

The WHO (the World Health Organisation, not the band) recommends people do a minimum of 150 minutes “moderate” exercise per week, with moderate considered anything that gets you moving, not necessarily out of breath.

150 minutes might sound like a lot, but that could be just 30 minutes per week day – with you free to sit on the sofa for the entirety of the weekend having hit the basic threshold.

What’s more, cycling doesn’t mean you have to kit yourself out in Lycra or speed around on a pricey road bike. To reach your exercise goal, you could simply ride 15 minutes to-and-from any destination, in your normal clothes at whatever pace is comfortable.

You can cycle to work, cycle to school, cycle to the shops or even cycle to the static bike in the gym. If a journey is under 4 miles and is pretty flat, you should seriously consider riding there on a bicycle – it could save your life.

And it doesn’t take any time out of your day, it’s just about replacing a short journey you make in a car by hopping on a bike.

Of course, the biggest barrier to more cycle journeys is safety and that’s why pushing for more bike lanes everywhere is vital.

After all, regular cycling journeys (even those very short 15-minute ones) has be shown to reduce the risk of getting:

I mean, if there was a pill that could reduce the risk of you getting those awful ailments, you’d take it – right? If so, then you should ride a bike too whenever you can.

So, while some avid drivers may claim that giving up road space for bike lanes will cause more traffic jams, the opposite is actually true.

Los Angeles is the ultimate case in point that building more lanes on a road doesn’t improve traffic flow. It makes it a whole lot worse, in fact.

So rather than adding more cars to the problem, imagine if you could increase vehicle traffic by 50% (like has been done in Amsterdam and Copenhagen) by just giving some extra space next to the road for much smaller vehicles (i.e. bikes). Yes, there will be a little less road space, but there’ll also be a lot less cars on the road – thus reducing the traffic problem very efficiently.

Global warming is an epidemic, but pollution also has drastic short-term consequences on the people in the surrounding areas.

In cities, pollution levels are increasingly leading people to wear pollution masks. Indeed, it goes without saying that it’s not safe to be breathing in so many toxins. One recent study even found that air quality is so bad in some cities that is has the same effect on people as smoking.

As well as your plain old pollution slowly killing everyone, more bike lanes can also lead to significant reductions in noise pollution.

Many studies have found connections between noise and stress, and the constant groan of traffic in urban areas can cause significant mental problems.

Bicycles, on the other hand, emit no noise or chemicals. What’s more, you can even reduce stress by cycling.

As well as stress, cycling also been shown to reduce the effects of depression.

All of these factors add up, meaning you’ll often find cities with lots of bikes featuring highest on quality of life studies. Indeed, the 2019 World Happiness Report saw Finland, Norway, Denmark, Iceland and the Netherlands top the charts – all countries which have high levels of cycling.

Ask many people in cycling havens like Copenhagen or Amsterdam why they cycle, and the main reason likely won’t be anything to do with saving the world or even getting fit. When a city has lots of good bike lanes, people will choose to cycle because it’s the fastest way to move around a city.

Cars are great at mid-to-long distance journeys. If you’re hopping between cities or going cross-country, a car or train will likely be your best bet. But in a city, where space is at a premium, cars just don’t make sense. For starters it’s rarely possible to even drive quickly in a city. And if you manage to find a rare moment without lots of traffic and red lights, you’ll still surely be left spending longer than you like trying to find somewhere to park the big metal box. Bicycles don’t have this problem.

Even so, by adding more bike lanes – and thus increasing the number of journeys made by bicycle – this leaves more space on the roads for the people that really do need to drive and thereby helping them, too, getting around faster. It’s win-win.

One of the lesser known facts about cycling is that is can also drastically increase the local economy.

There are several reasons for this. First, as cities become less car-centric, people return to the streets as it is a more pleasant experience, without the significant air and noise pollution. It makes sitting on a street drinking a coffee or browsing in shops a much more relaxing affair.

We also mentioned that parking cars in cities can be a big pain. Therefore, even if you drive past an interesting shop or café you’d like to check out, it’s not actually that easy to do so due to the difficulty in parking.

On a bike, parking is rarely a problem. People are free to stop and lock up on pretty much any street, leaving them to browse around at their own freewill.

As we discussed earlier, quality of life is also positively affected by increased cycling. That’s why many innovative cities are seeing the value of investing in more bike infrastructure, as they look to lure the top talent and businesses to their area. Take Odense for example, a city with just 200,000 people in Denmark, which is investing heavily in bike lanes and infrastructure as it looks to establish itself as unlikely leading tech city in Europe.

Roads and car parks account for a whopping 40% of space in most cities. With space at such a premium in these areas, it’s crazy that something so ineffective and costly continues to dominate the environment.

By reducing the number of roads cars can use – such as the ring-road system implemented around Groningen in the Netherlands – the streets can be returned to the people, providing more green areas as well as more areas for shops, markets and cafes.

Another massive example of this has been Barcelona’s “Superblocks” scheme, by which certain blocks of streets have seen cars banned, and the results have been so positive that more and more Superblocks are planned.

A 2006 study put out by the transportation bureau in Portland, Oregon showed some remarkable findings after asking people whether they do ride a bike or whether they would consider riding a bike.

The study showed there are four groups of people:

While this study separated people into four groups, there are actually only two:

People want to cycle safely and giving them the opportunity to do so – by creating segregated bike lanes in every town and city – is the way to do so.