When you’ve arrived at your destination, it’s vitally important that your bicycle can remain safe and sound when left on its own.

Unfortunately, carry a good bike lock can be a bulky business. What’s more, even if you lock your bike properly, there’s always a risk that pesky thieves can make off with any of your bike accessories that aren’t firmly held into place.

Removable lights can be an easy win for thieves, but, without doubt, the number one bike accessory that gets stolen is the bike seat. That’s because most bicycle seats are held in place with a quick release seat clamp, which – although very practical to adjust – is also very easy to steal without any tools whatsoever. I myself was the victim of bike seat theft just a few months ago. 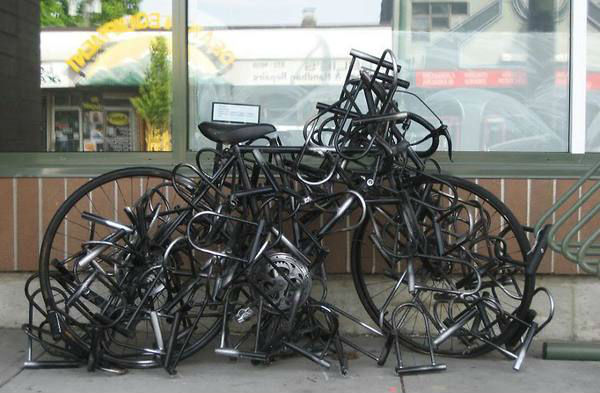 How to Secure Your Bike Seat

Now, there are a few ways in which to secure your bike seat.

The first easy method is to replace a quick release bike seat clamp with a non-quick release seat clamp. These are available from all good bike shops and can be secured using an allen key or a nut & bolt. However, it’s important to note that this doesn’t make your bike seat completely safe from thieves, it just means opportunist thieves without basic tools can’t steal your saddle.

If you want to go one step further and outwit thieves with Allen keys or multi-tools, you can also use a Torx bolt to secure your seat. This is a star shaped fastening and will require a professional bike seat thief to be able to steal your saddle.

But what if you want to make your bike seat as close to 100% secure as possible?

Well, you could run your bike lock through the saddle mount, but this means you’ll end up needing to carry a lot of bike locks with you – especially if you want to protect your wheels too.

That’s why one of the most interesting innovations of recent years has been the bike seat lock. A bike seat that is ALSO a bike lock. Multi-functional, init.

What is a Bike Seat Lock?

A bike seat lock is a bike seat that is easy to remove when your ride is finished and becomes your primary bike lock when your securing your ride.

In truth, there aren’t actually that many bike seat locks that have made it to market. Indeed, most of the best bicycle saddle locks are created by the appropriately named Seatylock, who have created a few versions of their bike seat lock, with different fits and colours available.

The key lock measures 1 metre (39.4”) in length and takes less than 10 seconds to convert from a seat to a saddle (and vice versa).

The Seatylock Comfort also water resistant, extremely durable and provides a great amount of comfort thanks to the saddle’s “floating” construction which also makes it shock resistant.

A comfortable seat which quickly and conveniently turns into a great bike lock. Fast and easy to take on and off. Comfort model has a wider saddle, optimizing it for leisure.

The Seatylock Trekking is very similar to the Comfort model, but with some subtle differences.

For one, it actually comes in four colours (Chameleon Black, Chameleon Red, Chameleon Green and Stripes Black), while there’s also a white version kicking around sometimes.

The main difference with the Trekking model is that is a sleeker, more aero-dynamic seat – meaning it is more focussed on the agility of the rider rather than pure squishy comfort.

A sleek, aero-dynamic seat which quickly and conveniently turns into a great bike lock. Fast and easy to take on and off. Trekking model designed for optimal for agility.