What Are Fixies? Pros and Cons of Fixed-Gear Bikes

Fixies (AKA fixed-gear bikes) are bikes that don’t have multiple gears. They rear wheel hub is directly connected with the pedals. This means that if the wheel is moving, so are the pedals. Therefore, it’s not possible to freewheel (e.g. roll down a hill without the pedals moving), while the pedals can also be used as brakes to slow down the bike manually.

The diamond-frame fixed-gear bikes (not to be confused with single-speed bicycles) ridden today are fundamentally the same as those built in the nineteenth century. They are a tangible link to cycling roots; our point of contact with the formidable cyclists, the Olympic athletes and the Keirin races of today. They are also an aesthetic reference point shared with the designers and artists who have helped shape fashion and street culture.

Here on the outskirts of Cambridge at our Quella workshop, we hand-build high quality fixed-gear bicycles and are often asked, why ride fixed-gear? People are clearly still left wondering what it’s all about. In this post, an attempt will be made to answer some of the most frequently asked questions concerning fixed-gear riding.

Mechanically speaking, the difference between a fixed-gear and a geared bike is the fixed rear cog. This means that when the rear wheel is in motion, so are the pedals, which means the rider is unable to free-wheel.

Today most fixies, including Quella One, are fitted with a ‘flip-flop’ hub meaning you can easily switch between fixed-gear and freewheel sprockets (so you can coast like an ordinary bike)  by simply flipping the wheel around.

When looking to buy a bike and you ask the opinion of a lot of your friends, chances are you’ll be left with two basic choices: fixed gear or not. If you have a few friends who own a fixie, you’ll find that some of them will have a lot of good things to say about it and a lot of nasty things to say about the geared bikes and vice-versa. Most times, though, the fixed-gear get a lot more hate than their geared counterparts, but this shouldn’t affect the decision of someone who is looking to get into biking.

The primary reasons why fixies are hated is because most of those who own them are hipsters. It’s a paradox: everybody hates hipsters because not hating them is too mainstream. On the other side of the spectrum, fixies are used in track racing. This is due to the fact that the rider kicking speed directly translates into the bike’s speed.

Those who understand how bikes are built know that the fixie is disadvantageous in a lot more ways. For instance, fixed gear bikes are not ideal for areas where there’s at least a 20-degree in all roads. An uphill climb is virtually impossible with a fixie unless every gym day of yours is leg day. Another thing about fixies is that some of them have no breaks, which is just plain dangerous.

The term fixie is a tricky term, too. Fixies are pretty much single-speed bikes, with the pedal needing to be constantly moving if the wheels are moving. There are single-speed bikes, however, that come with a flip-flop hub. This allows the user to switch to freewheel mode and coast – something that a traditional fixie can’t do.

With its disadvantages, the fixie also has a lot of advantages. For one, there are no complex mechanisms attached to the bike. This results to the bike being a little lighter and easier to maneuver for beginners. Stripped to its basic parts, the fixed-gear bike is also a lot easier to clean, repair, and maintain. Since its speed is directly up to its user, the fixie also makes for a harder exercise. Finally, fixies come quite cheaper than their geared cousins.

Fixed-gear bikes have a devoted following. But they’re not suitable for every rider. So below we look through the advantages and disadvantages of buying a fixie.

Fixies are essentially minimalist bikes. They contain nothing but the basics you need to ride a bike: pedals, a chain, a seat, handlebars and wheels. Even hand brakes aren’t always included by default on fixies. The key thing to note about fixed-gear bikes is that, as their name suggests: they only have one gear setting.

One of the big benefits of such a minimal bike design is that fixed-gear bikes are light and fast to ride.

Many city riders choose fixies because they’re speedy and well suited to smooth, flat surfaces found in most urban areas.

Obviously, being short of any gears means that the bikes are also short of many of the components that are found on a geared bike such as the rear brake, derailleurs, shift levers and extra sprockets. Consequently, besides being much lighter, it also requires significantly less maintenance.

Another perk of the simplisitic design of fixies is that they’re also, therefore, generally cheap to make and therefore buy. You can often pick up a high-end fixed-gear bike for the same price as a low to mid-range road bike.

Along with being the staple on most velodromes, fixed-gear has become a popular option for ‘off-season’ serious cyclists and leisure cyclists alike. The reason being is that the lack of freewheeling capabilities encourages a much smoother, rhythmic, and therefore, improved pedalling technique.

It is worth noting that the improved feel, connection and the aforementioned ‘closer communion’ with the road results in far less falls and braking using the fixed wheel drive train is unaffected by wet weather, thus making it much saferto ride in rainy conditions.

Being able to pick the colour of the frame, seat, tyres, rim and almost all other components of the bike; customisation and the ability to really create a bespoke model that best fits the taste of an individual is an attractive lure. Beyond that however, rid of all unnecessary components, the ‘fixie’ is a simple, minimalist and streamlined instrument that is, in its own right, a piece of art.

Although taking a few attempts to get used to, the inability to coast combined with the ability to decelerate using the pedals results in better control and manoeuvrability. The direct connection between cyclist and rear wheels means that you really feel the response of the road in your feet, which some say creates a ‘closer communion’ between man and machine – a truly seductive and fun way to cycle.

The obvious downside of having no gears is that there’s no easy way to get up hills. You’re going to have to work.

But, the effect is minimal and you can always fit road wheels…

To many, freerolling down a hill that you’ve just conquered can be one of the great joys of cycling. However, the pedals of fixies are always turning when you’re moving.

Therefore, to enjoy a “freewheeling experience” fixie riders have to take their feet away from the pedals and tuck in their legs so they are safely away from the speedy pedals

Unless, that is, your fixed gear bike has a flip-flop hub that enables single-speed riding as-well.

As you’re more connected to the acceleration and deacceleration of a fixie, it also puts more strain on the knees of riders.

The fixed mechanism means there is more stress put upon the system resulting in faster deterioration of drive train components.

What’s the Difference Between Fixed-Gear and Single Speed Bikes?

Fixed gear bikes (fixies) and singlespeed bikes are very similar. However, the main difference is that single speed bikes have a freewheel, while fixies do not. Therefore, on a single speed bicycle, you can stop pedalling without affecting the speed, whereas on fixies the pedals will always when the backwheel moves. If you try to stop pedalling on a fixie, this acts as a brake.

This difference is most noticeable when cycling downhill. With fixed gear bikes you must keep pedalling (or take your feet away from the pedals), while riders on single speed bicycles can coast down without pedalling.

There’s no shortage of fixed-gear bike brands out there, so there’s plenty of choice if you’re looking to buy a fixie. We’d recommened the following fixie brands: 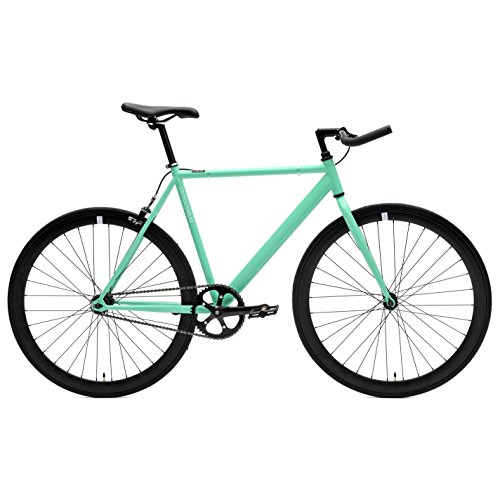 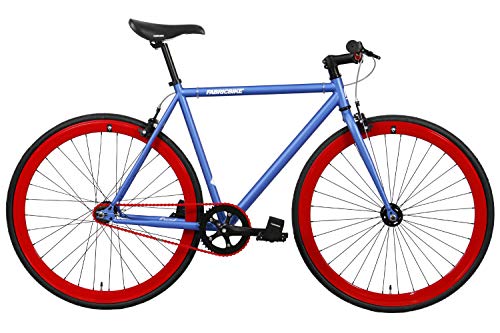 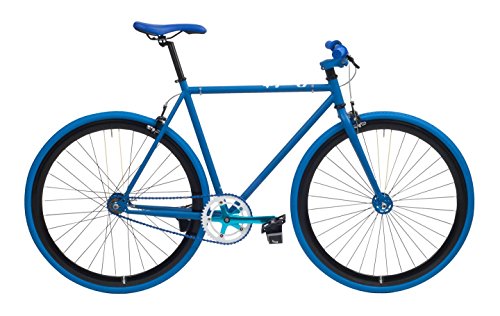 All in all, though, the choice will be up to you. Why would you choose a fixie over the other? Why not? For that, I’ll leave a childhood story of mine.

When I was a kid, I had no knowledge of bikes at all. My friends had them, and I borrowed theirs from time to time. I would just hop on one of their bikes and stroll around town. I didn’t care whether it was fixed-gear or not.

Now, not caring what bike I was using is an attitude I carry to this day. As long as I could ride a bike, I was happy. Why not try this for yourself as well? Instead of hearing people argue about which bikes are good, try to determine which one is good for you. Try out different types of bikes and see which ones you’re most comfortable with.

The fixed-gear has returned simplicity to cycling, leaving you to concentrate on cadence and speed, and allowing the rider to enjoy the real connection with the road that comes with it. There is always a time and a place for everything, and if you live in a relatively flat urban area then the fixed-gear bike is most likely for you! Eloquently summarised by Edwards and Leonard:

“A fixed-gear is the most efficient way a person can travel around a track or through the city streets. Fixed-gear bikes have long been used by club riders looking as a shortcut to maintaining form through the dark, wet winter months. Now, in cities around the world, thousands are following the example of bike messengers and are using track bikes and road conversions as a means of transport, escape and release… simply riding because a fixed-gear is so fun. The bike is a blank canvas upon which riders express individuality, or a community. It’s simplicity and purity are expressed both in the clean lines of its design and its ride.” 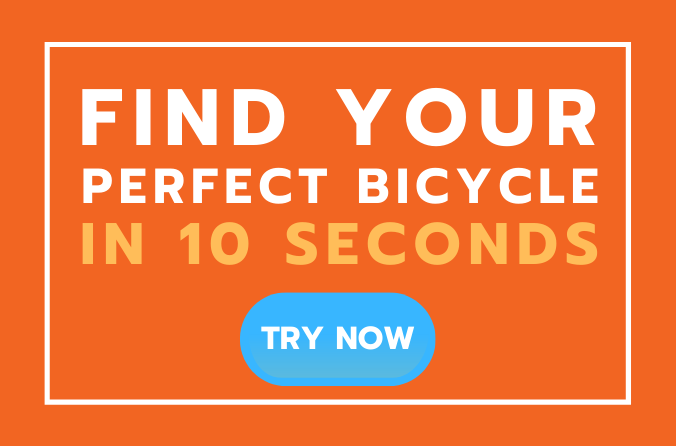