Folding bikes have come a long way since they first come onto the scene. These early bikes were known for being difficult to ride, difficult to fold and, above all, were heavy to carry.

Luckily for commuters, the technology has improved greatly since and manufacturers started to invest in new technology that could create super compact and lightweight bikes that could be ridden and then folded up into convenient hand luggage.

Since the technology has come such a long way we thought we would write about it and take a look at some of the best light foldable bikes we could find.

The Benefits of Choosing a Light Fold-Up Bike

If you are a commuter, whether, by train, foot or in the car, your daily commute could be made much faster and much more enjoyable with a bike. You don’t even need to worry about space, storage or any extra fees on trains by choosing a great lightweight folding bike.

There is more to folding bikes though so let’s take a look at some of the benefits of owning one.

·      A folding bike can make your train or bus commute much easier.

Not many of us are lucky enough to live right next to a train station which means that if you take the train to work then you are still likely to have a bit of a walk or drive to get to the station. A folding bike can make this extra commuting time far quicker and easier. Just hop on your bike and ride to the station and then fold it up and carry it onto the train. It takes up minimal space and you won’t have to worry about making sure you are in the bike carriage on the train.

Folding bikes aren’t just for trains and buses. You could cut down on some of your commuting time by taking the car part of the way and then parking and grabbing your folding bike out of the boot for the rest of your trip through congested traffic. This is great for more than just a work commute. You can enjoy a great day out with a bike ride but without having to have bike racks attached to your car or for popping to the shops.

Whether it’s at home, the office or even the gym if your bike folds up small enough then it won’t even be noticed! Pop it into a large locker or under your desk while out and then at home you can fold up the bike and keep it handy in the hallway or in a cupboard. These take up much less space than a traditional bike which is perfect for most homes.

When it comes to choosing a folding bike there are a few things you need to consider.

How Much Do Folding Bikes Weigh?

As mentioned above the weight of a folding back is extremely important. Especially if you are likely to spend a lot of time carrying and manoeuvring your bike around by hand. Folding bikes can differ by quite a lot when it comes to their weight and this is often down to the materials they are made from. For example, a titanium folding bike can combine your need for a lighter bike that is still sturdy and strong or for a bike that is even lighter you might want to consider an aluminium frame.

The lightest folding bike that we talk about in this article is just over 11kg which is a fantastic achievement for all the materials and technology that goes into a bike. These lightweight bikes tend to be a little more expensive than heavier models and if your budget is your limitation then it isn’t unreasonable to expect a folding bike to be as heavy as around 20kg. This is still light enough to be able to carry but is obviously going to tire out your arms a little more than a lighter bike.

It is rare to come across a bike that is lighter than 11 to 12kg but some people are looking for folding bikes under 10kg and there may be one or two out there but most folding bikes are at least 11kg’s in weight.

What Are the Lightest Folding Bikes?

Weight is the major factor to consider when choosing a great folding bike so we have taken some time to have a look at the specifications of some of the lightest folding bikes we could find.

If you are a commuter looking for a smooth ride on a bike that is easily folded down to a compact size then this bike is a great option for an affordable folding bike. Made from a lacquered aluminium frame to ensure the bike is lightweight and easy to carry, this is a bike that looks as good as it is convenient. 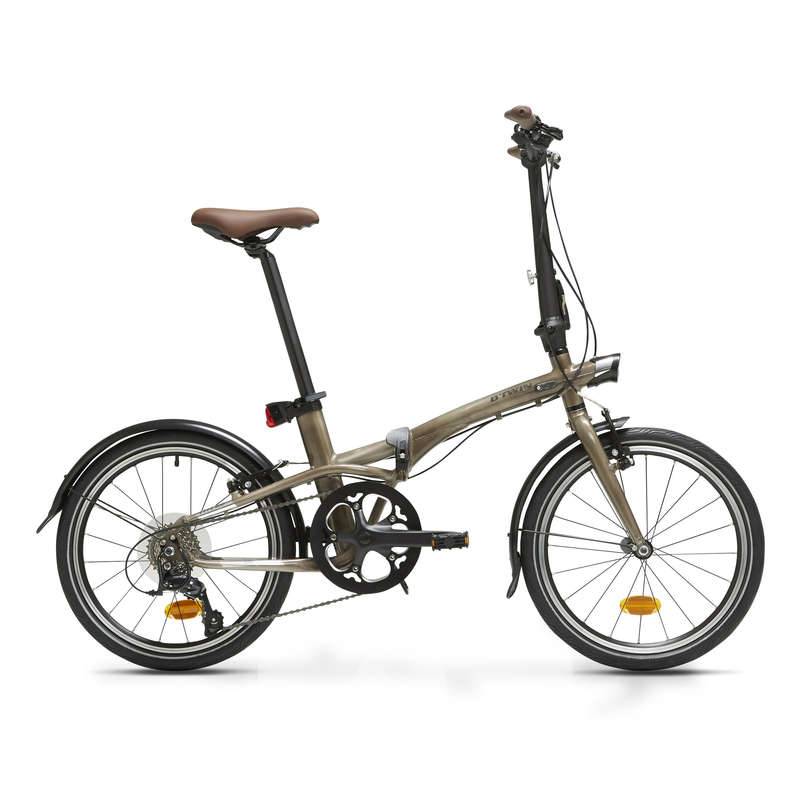 Weighing in under 12kg, this is a great value commuter bike available from Decathlon. As well as being easy to fold and unfold, the Tilt 900 also features built-in front and back lights, plus a mudguard as standard.

This is a bike that comes almost ready to ride directly from the manufacturer. Most of the assembly has been done for your before you take delivery – a great bonus for busy people strapped for time. This is an uncomplicated lightweight bike that comes with one speed but is a durable bike that will last.

The Ecosmo is a lovely, affordable bike that is perfect for anyone wanting to try this new way of commuting out. The frame is made from lightweight alloy and the 16” wheels enable this bike to be as lightweight as it is. At under £300 this is a wonderful starter bike. tIt does take slightly longer to fold up than other bikes but should take you around a minute. 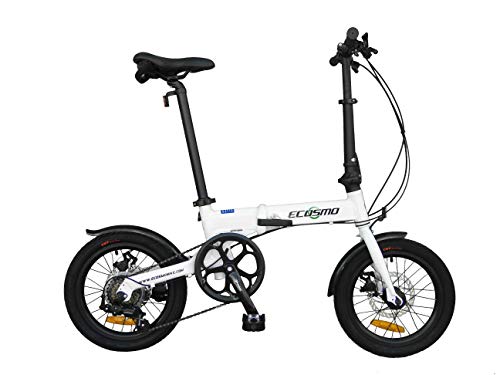 This model of lightweight foldable bike is slightly heavier than those previously mentioned by at just under 13kg this bike is still compact and easy to carry and comes with an extra bonus –  a 7-speed gear system which enables you to travel up and down hills with ease. Perfect for both your daily commute and for enjoyable rides at the weekend and with an easy fold mechanism is a great choice. 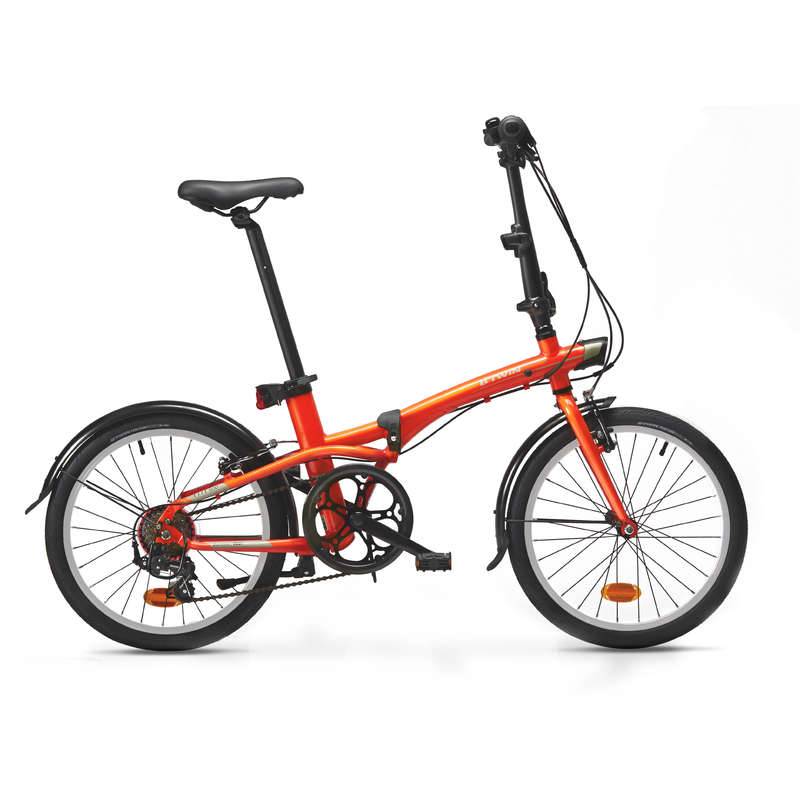 You don’t find many folding bikes for under £300, so it’s safe to say this cheap and cheerful ride is an absolute bargain and a great option for city commuters.

This Dahon is a sleek bike that has everything you need in a folding bike. At just under 13kg this is lightweight enough to be easy to carry when folded and is a smooth ride. With 8-speed gear system, this is a bike you can take up and downhill as well as on the train or bus. 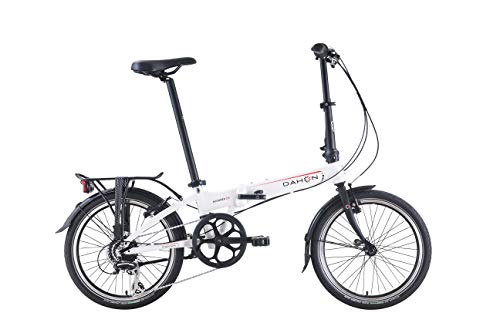 If you are considering a lightweight fold up bike that offers you a great mix of value for money, a comfortable ride and a bike that folds then it is worth taking a look at this one made by K+Pop. Weighing just 13kg this bike is lightweight enough to carry onto a train or bus but also comes with a 7-speed gear system to offer you a comfortable ride too. 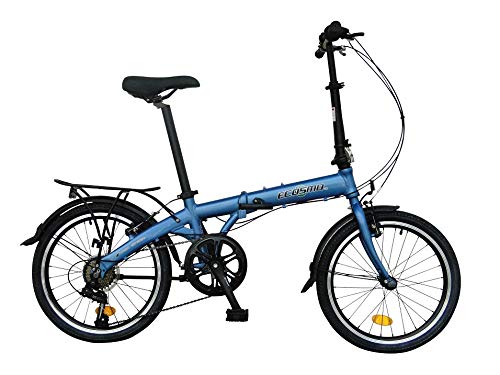 What Is The Lightest Brompton Bike?

Brompton are well known for producing super compact bikes that are made to a high quality. These bikes have been handmade in London since 1975 and have become an iconic sight in cities around the UK ever since. These bikes are perfect for your commute to work into the city but their high standard of manufacture also ensures you get a pleasurable bike ride that you can make the most of at the weekends too.

Brompton are aware of just how important the weight of a folding bike is which is why they have a Brompton superlight range to choose from. This is a range of bikes that are among the lowest weights possible for this type of bike. Take a look at their range of impressive and lightweight folding bikes here.

This bike is an example of a super lightweight Brompton bike. At just 11.6kg this is one of the lighter weight folding bikes you can buy. It comes with the well-known original M style of handlebar and their patented folding design that makes folding this bike away an easy experience – perfect for your commute or even for a pleasurable bike ride around the city.

Can You Buy A Light Electric Folding Bike?

Luckily you can buy an electric folding bike that is lightweight and we have found a great option that is one of the lightest folding electric bike we could find.

You can enjoy the benefits of a folding bike that is easy to store, takes up minimal space and can be folded to take on public transport while still having the benefits of electric assistance with this bike by B’Twin. It might not be the lightest foldable bike you can buy but the extra weight is well worth it for the extra help on your ride. 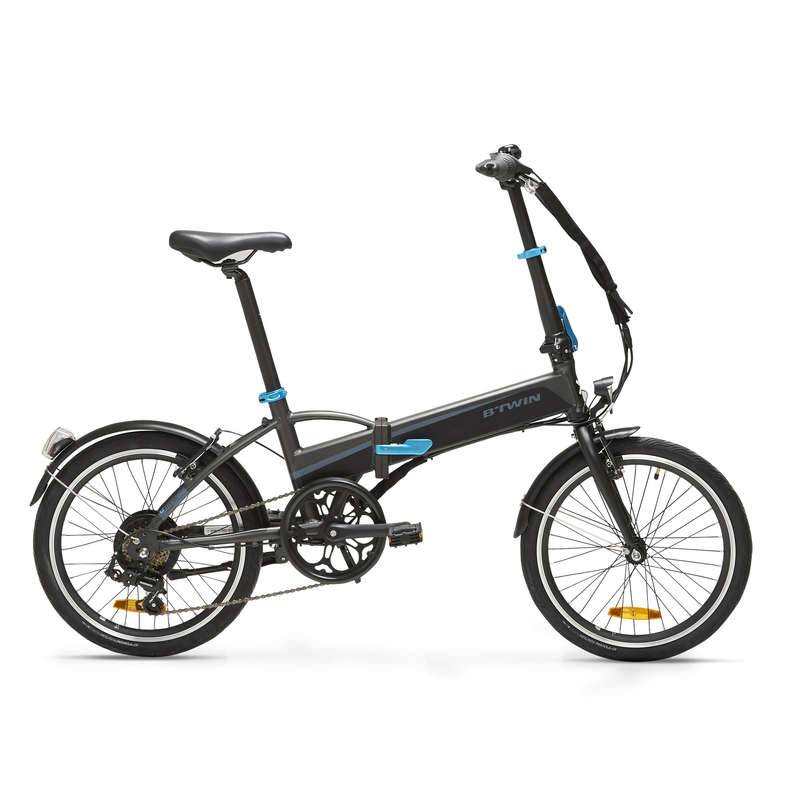 What Is THE Lightest Folding Bike?

We have had a good look at some of the lighter weight bikes available and even found a relatively lightweight electric option but what is the lightest folding bike? The best option we could find is this one by well-known folding bike manufacturer, Brompton.

This is a superlight bike that is made for speed, comfort and commutability. The lightweight bike is made from titanium components instead of an all-steel design that makes it slightly lighter than similar available bikes. If you want the lightest foldable bike you can find then this is one of the best options for you to consider. The folding design and lightweight design makes it easy to hop on and off trains and buses or you can easily pop it into the boot of the car to take it on day trips and holidays too.