There are few feelings in life more satisfying than overtaking a car on a bike.

This is, however, easier said than done.

The main complication is that there are traffic lights at the top of the slope. Any rider wanting that euphoric feeling of leading the way down the slope has two options.

The first is to try and beat the cars off the line, to be able to accelerate quicker than them.

The second is to try and hit the lights at full speed just as they turn green and zoom down the slope before anyone can pass you.

Both of these have their difficulties.

For the former option to be successful, one has to put out a lot of power, for the latter a lung-busting effort is needed to make it in time before any of the cars get through. For either of these realities to be true, clipless pedals are required.

Whilst this scenario is one in which the benefits of clipless are most obviously manifest, they definitely aren’t limited to just this stretch.

I love riding clipless and it has made a huge difference to the whole ride experience. Much more power can be transferred, you feel much more in control of your vehicle and your feet are much less likely to slip off the pedal which then proceeds to whack you in the shin.

Yes, clipless pedals do take some getting used to (- anyone who says they learnt without falling over at a traffic light at least once is lying) but once you can use them it makes a whole lot of difference. Another challenge is that whereas clipless shoes are generally optimised for the bike, the off the bike performance is entirely neglected.

We at Discerning Cyclist believe this shouldn’t be the case so have compiled a list of shoes that allow you to be the first down the slope but are equally suited to normal off the bike wear.

We recently reviewed these here at Discerning Cyclist and we thought they performed really well. The shank has been cleverly designed to function well on and off the bike.

The shoe is stiff enough that you don’t lose too much power when pedalling but it also flexes in all the right places so that walking feels very normal. DZR have added some reflective detailing, an elastic lace catch (useful in mitigating against the dreaded lace-caught-in-the-crankset scenario) and a good grippy sole.

The rider has the option to run flat or clipless pedals. They look like an ordinary pair of midtop shoes and are a good all-round choice. They cost £125 and come in a range of sizes.

This shoe is the staple of many bike messengers all over the world. It has a classic casual shoe look (the same as the regular Kursk) and the sole has been specially designed to allow natural walking. Like other shoes in this list, there is some reflective detailing and an elastic lace catch.

By all accounts the sole requires a bit of wearing in but very soon it feels normal to walk in. On the bike these perform well, easy to get on and off while giving you the ability to chase traffic lights that only SPD pedals can give you.

Do be advised that these shoes run a little big so order half a size smaller than you usually would. They are some of the most casual looking shoes on this list and cost £80. There is a reason that thousands of bike couriers choose this.

There is a hidden inner shank which adds stiffness to the sole when it’s needed (i.e. when pedalling). Because these are made by Shimano these have been optimised and particularly tailored to Shimano SPD.

While these are more comfortable than lots of other cycling shoes, they sometimes require slightly more twist to unclip as the soles have a bit more flex. They cost £65 and come in a range of sizes and colours. 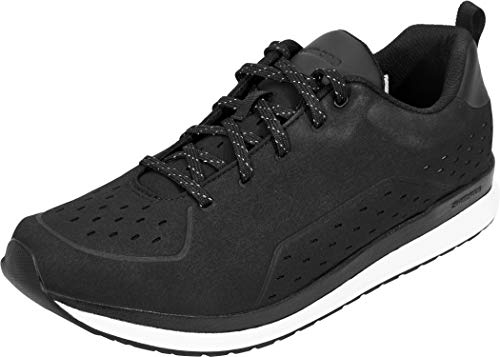 These have a classic trainer look and perform like trainers off the bike in large part due to their foam soles. Quoc have made them with a fast drying, anti-bacterial upper and what’s more have made them 100% vegan.

Despite the very obvious trainer aesthetic and functionality the designers have somehow managed to put in a fully recessed SPD mount. There is some 3M reflective detailing around the toe and heel and a patented lacing system to keep the rider’s foot secure.

These are more expensive than most at £150 but they are very heavily laden (figuratively speaking) with features so you get a lot of bang for your buck. If they are in stock, buy quickly as they sell out in no time.

The previous iteration of these shoes have been my trusty pair of commuting shoes for the last couple of years and DZR have tweaked the latest to be even better.

Full grain leather is used and the waterproof coating on it keeps it genuinely waterproof. By ‘genuinely’ I mean that it is waterproof even to the point of prolonged immersion.

DZR have chosen to prioritise on the bike performance slightly more in this model as they have made the sole stiffer and this really is noticeable when putting out a lot of power when you need to catch that green light.

Nevertheless, these are comfortable to walk in but have more of a boot than trainer feel. Like most of their shoes DZR have added some reflective detailing, an elastic lace catch and a grippy sole. The rider has the option to run flat or clipless pedals.

I would wholeheartedly recommend this to any commuter who lives somewhere rainy and has $189 to spend on a pair of urban clipless shoes.

This pair of sandals is perhaps one of the most divisive pieces of cycling paraphernalia out there.

Our family was split 50:50. However, this choice of footwear is one that pops up reasonably often in the summertime. The sandal has a classic flat footbed for comfort when walking even over long distances (i.e. it feels like any other sandal).

There is a glass fibre insert to try and stiffen up the sole for greater power transfer which does succeed but it is not as stiff as some of the other shoes in this list. Socks are permissible with these but definitely discouraged (unless one wants to look like a man of a certain age/era on holiday).

All in all these do exactly what they intend to do, namely to provide a hot weather shoe for use with SPD pedals. These sandals will set you back around £80 and are available in a range of sizes. 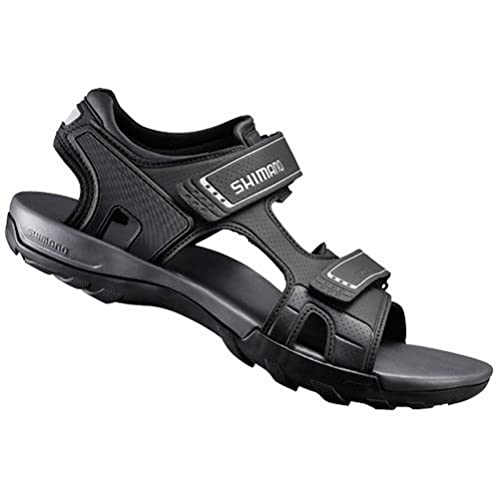