Cycling is my favourite form of procrastination.

Pre-Covid, I frequently extended my commute to include a portion of the Thames or a lap of Richmond Park in an effort to put off the work that awaited me at home.

Now that my commute involves getting out of my bed to sit at my desk, there is less opportunity to do this. However, much to the chagrin of my colleagues, occasions which were meant to be routine errands on my lunch break somehow lapsed into rides round southwest London; you know how it is.

Whether due to efficiency or laziness, both before and during the pandemic, I cycle in the clothes I work in. Since last March, no one from work has seen below my chest, so I can wear (or indeed not wear) whichever trousers I wish. However, the sartorial demands for my Zoom-visible top half remain fairly consistent.

As such, for my lunchtime foray, I must wear a shirt and then cycle in said shirt. While there are myriad garments that would satisfy the first criterion, the moment I leave to ‘pop to the shops’ I feel like I’m actually wearing my bag for life. Cue a bike-friendly shirt.

British brand Vulpine sent us their Men’s Vauxhall Cotton/Merino Shirt to see if it would fit the bill. They describe it as a ‘Luxurious, highly practical shirt, with the benefits of merino wool and a subtly adapted fit for cycling’. It comes charcoal or petrol in a variety of sizes, with a price of £80.

Upon taking it out of the packet, it looks and feels a lot like a normal smart summer shirt with a seemingly classic cut. Suitable then for most workplaces. With its blend of cotton and merino it feels soft against the skin even in my rigorous stuffy office test (i.e. my box bedroom on a hot May day).

The look is clean and smart. My one minor quibble is that the second button is slightly too high for an unassuming open neck. Whereas the third button is too low even by Zoom standards.

Breathable Cycling Shirt for the Office

On the bike, however, is when the Vauxhall really shines. On the warm day in question, what was originally meant to be a milk run turned into a fully-fledged ride (on my new favourite route). In the roughly 15 miles that followed, the aforementioned fabric blend made for very comfortable riding even in reasonably high temperatures. What is more, the merino element meant that the shirt didn’t smell like I had just been for a ride in it which also affords the top a slight stretch which made a noticeable difference.

The tailors at Vulpine have done some subtle wizardry with the back of the shirt by adding a centre back box pleat. This results in something that is especially conducive to cycling and helped me to have a far less sweaty torso than usual.

For a reason that I can’t quite understand, there is a ¾ covered placket on the front which looks slightly odd but you don’t notice it while riding. I wonder if it’s to prevent sightings of your torso while cycling so I’m sure fellow commuters will be grateful it’s there. They will also be thankful that the back of the shirt is long enough that nothing untoward is seen. All in all, the cut looks classic and feels comfortable.

My mother predicates her entire opinion of my cycling attire on its conspicuity and as such was less than impressed when I came home in a nearly black shirt. Thinking she would be somewhat placated by the reflective piping strips on the cuffs, she needed these pointing out and accused them of being ‘tokenistic’. Notwithstanding, this is a shirt that can legitimately claim that it’s been ‘adapted for city cycling’.

In conclusion, if you need a work shirt that also works well on a bike, don’t look any further than this one. It’s smart and comfortable and at £80 is also relatively inexpensive compared to its competitors. 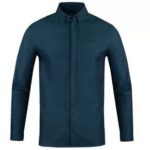