Manchester. Famous for its football clubs, industrial heritage and bands. One of the members of a famous Mancunian band described it as the city with “everything except a beach”.

While pithy, it is sadly untrue as the proposition “everything” clearly does not include good weather.

Having grown up here, I have reasonable evidence to suggest that people have been born, lived and died wearing a jacket for their entire existence.

While there is a perennial debate about whether Manchester is blue or red, we inhabitants can unanimously agree it’s actually grey. These grey conditions are ones that many cycle commuters face to some extent and as such there needs to be some mitigating provision.

Enter German brand Vaude who have sent us one of their latest offerings, the Men’s Cyclist Softshell Jacket. They describe it as a Windproof softshell jacket for biking. It weighs in at around £140 and comes in black, dark blue and blue grey. 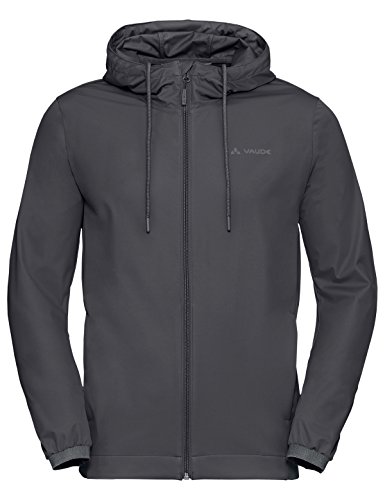 On the bike, this softshell does a reasonably good job. It has a very light, thin construction which means it is fairly breathable which is important for sweat patch minimisation.

In many items of clothing, breathability comes at the expense of other features; this however is not the case for this jacket. Vaude have also made it to be windproof and as seems to be the case with most German engineers, they achieve this aim. This is made more remarkable when the thinness is taken into account.

What makes this possible is something Vaude succinctly call a Ceplex Green Recycled S Cafe® membrane. Whilst I can’t necessarily define all those words, I can appreciate the many benefits their sum total describes. As well as providing windproofness, this is also key in the jacket being breathable.

It can be taken that one of the axioms which presupposes the universe is that something cannot be both waterproof and breathable. In this case Vaude have chosen breathability (it is a softshell after all) but the membrane also makes the jacket admirably water resistant.

As always at Discerning Cyclist, we take testing seriously, and during this rigorous process both water and Aldi light soy sauce were found to bead well on the surface. So for any precipitation level that would fall under the category (or umbrella, if you prefer) of drizzle, this membrane provides more than adequate protection.

In case this material didn’t have enough functionality, it also is fast drying, offers UV protection and is naturally odour inhibiting. Oh, and the fabric is made from recycled coffee grounds.

The fabric has a special Eco Finish coating which is free from fluorocarbons and makes the jacket more water resistant. This provides multi-faceted functionality whilst being environmentally friendly.

The cut of the fabric is what Vaude describe as regular, so it fits just like a standard jacket. Whilst this is good for off the bike, I generally prefer cycling jackets to be more fitted. Credit to the designers who have made the sleeves articulated. For those of us who aren’t familiar with the intricacies of the tailoring lexicon, this means that the fabric is cut such that there is more room on the underarm. The effect this has is that sleeves will not ride up as the arm is extended which means no more cold lower forearms on my morning ride.

I am a fan of the partially elasticated waist which keeps the jacket in place around the waist but isn’t so stretchy that it gives the top a bubbled look. There is also some stretch inherent to softshell material which makes everything all together more comfortable.

The cuffs also have elastic portions. There is a hood which is tightened by string toggles which can achieve a fairly snug fit but to keep the fit constant readjustment was required.

There aren’t many things which strike the fear of God into me quite like sections of my morning commute or more accurately the erratic driving of my fellow commuters on those sections. As such any increase in visibility is very much appreciated. Unfortunately there are only some tokenistic reflective elements on the back of the jacket. There is a full-length zip at the front and the sides host two reasonably-sized zipped pockets that are more than sufficient for phones, wallets, keys etc.

At Discerning Cyclist, the mantra is finding stylish clothes to cycle in and in many ways the litmus test for this is, having ascertained the cycling functionality, whether I would wear the item of clothing even if I weren’t cycling. For this jacket, even in the relatively short time I’ve had it, the answer has been a resounding “yes”. This means that unlike other jackets, it doesn’t have to be bundled away after a ride.

As previously mentioned it’s very comfortable to wear and I genuinely do see myself wearing this every day for at least four months of the year (or 10 months in a year because I am based in the UK). Vaude have also made this to be used in many different pursuits as it is part of their multi use range. This means that although some cycling specific features are absent, Vaude have aimed to make a more broadly applicable jacket.

This is a well-made jacket, there is no doubt about it.

It performs well on the bike and off it offers a versatile option. If you cycle in a city and partake in other outdoor pursuits it may well be the perfect option. But for someone like me for whom cycling is my major activity, the approximate £140 price tag does seem a bit steep, especially given that cycle-specific brands like Rapha sell similar items for just over half the price.

I want to make it clear that Vaude have created a brilliant product but I think there are better value alternatives for cyclists. That being said, given that I have one now, it definitely won’t be short of use.

Rohan Joseph
Rohan is Discerning Cyclist's chief reviewer. Most of his exploits on a bike involve hurtling across London's streets to either his lectures or church. He also enjoys labouring up inclines in an attempt to feel athletic and has recently joined the minimalists in riding a fixie (of his own creation). As a firm believer that a small exertion justifies a large meal, he passionately extols the virtues of a post-ride pizza to anyone who will listen.
Latest posts by Rohan Joseph (see all)