There was a dilemma I used to face each day on the way home from work. Perhaps it’s a reflection of my incredibly fortunate life so far that this choice was probably the worst thing about my day…

One option was to take the road, fast but very busy and the most atrocious road surface you’ve ever seen (or more pertinently felt).

The second was to take an off-road bike route, the Fallowfield Loop. This runs along an old trainline which has a super smooth road surface and allowed me to avoid all motorised traffic. It had just one pitfall: it was entirely devoid of lighting. Cycling along it after sunset felt like riding into the abyss.

More than once, I ended up in what I thought was some sort of foliage after I misjudged where the path ended and where the banking began. Either I had to resurface and pedestrianize the road myself or find some way of lighting the off-road route.

Australian brand Knog sent us their PWR Road front light to see if it would solve this problem. It costs around £84.99 and is the flagship front light in their PWR range (note: “PWR” is just short for “Power”, not a fancy anagram like I thought).

It’s USP is that it is ‘a modular bike light’. What this means is that the PWR road is made up of a big battery pack and then has a ‘lighthead’ which attaches to it – that’s right, it’s a portable power bank and a bicycle light in one device.

There are a variety of settings ranging from mimicry of a collapsed star to the equivalent of strapping a strobe light to your bars. All these settings are cycled through by twisting the lighthead: much better than having to faff about with tiny fiddly buttons.

This lighthead throws out a maximum of 700 lumens which as you can see from the videos is really quite bright for something as sleek as this. The rate-limiting step therefore will not be max lumens as this was amply sufficient to light any portion of road, Fallowfield loop or otherwise. This setting only lasted for roughly 90 minutes so had to be used sparingly. The lowest ‘Stamina’ lasted a mammoth 20 hours however put out a measly 10% of the maximum output. For most of my testing miles I used the solid setting in between these two which was bright enough for the overwhelming majority of my riding.

You can see a demo of the still and flashing modes from our YouTube channel below:

Given that I have zero desire to induce seizures in my fellow road users I hardly utilised the flashing modes. However if (for some compelling reason) I wished to exercise this ability, there were 3 different flashing modes from intense strobe to eco-flash which claims to have a gargantuan 165 hour life.

I can’t think of any other types of mode you would want for this light but if you can, Knog’s Modemaker allows you to further customise your lighthead’s flashing and brightness behaviour.

The designers and engineers behind the PWR range (all 12 of them) have made the beam slightly elliptical and added clear sections on the side of the lighthead which increases your side visibility to other traffic and makes an appreciable difference to lighting up the whole path ahead, not just a thin beam. 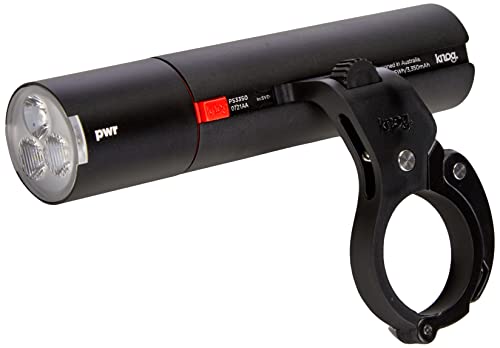 Upon removal of the lighthead, one is confronted with a couple of USB ports in the battery section. This is because this pack not only powers the light but will also handily charge your mobile devices.

The PWR light has a 3350mAh battery, which can power up to 180 hours of light in eco flashing mode or charge up a smart phone to about 50%.

A personal bugbear of mine against bike lights is their total lack of indication as to when they will suddenly decide to run out of battery. Thankfully the PWR road has very clear indicators of how much battery it has both during charge and discharge. Unfortunately, the mechanism to remove the light head is reasonably fiddly and I did end up slightly removing the battery from the metal sheath it sits inside.

The mounting mechanism works on bars with diameter 22.2-38.1mm so will fit nigh on every bike in the realm of creation. It can be fastened either above or below the handlebars and could even be rigged to fit a helmet. Throughout the testing the mount kept the light secure.

All in all, Knog have made an excellent bike light that also doubles up as a power bank for your mobile devices when you’re on the go. Obviously, this means that this light is more expensive than others out there, but you are effectively getting two useful products in one small package.

The Knog PWR Road Light 700L performs very well as both a bike light and a power bank and would make a great addition to any discerning setup. No more riding into foliage for me. 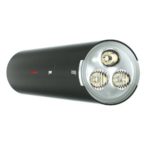