How Many Bicycles Are Actually in Beijing? [STATS]

It’s the question that’s been at the back of our minds ever since Katie Melua dropped the Top 5 hit that enlightened us all, so I thought it was about time I found out the story behind what the bicycle really means in China’s heritage, darling child city. Here’s everything you need to know about the ‘Bicycle Kingdom’.

Are There Really 9 Million Bicycles in Beijing?

Well, there definitely was, back in 1996, about 9.2 million bicycles, or 2.5 bikes per household in Beijing. By the time Katie put pen to paper in 2005 that number was already on the rise, and by 2009 they totalled at a whopping 13 million across the capital.

Although there were 4 million more bicycles recorded in that time, the total number of people actually using them dropped by over 40%, thanks to rises in car and metro use – the ‘Bicycle Kingdom’ is a relic of the past.

Memorials still stand to signify the importance bicycles have had on Beijing’s culture. Bicycle sculptures stand proudly around the city (pictured below), alongside the less ceremonial ‘Bicycle Graveyards’. 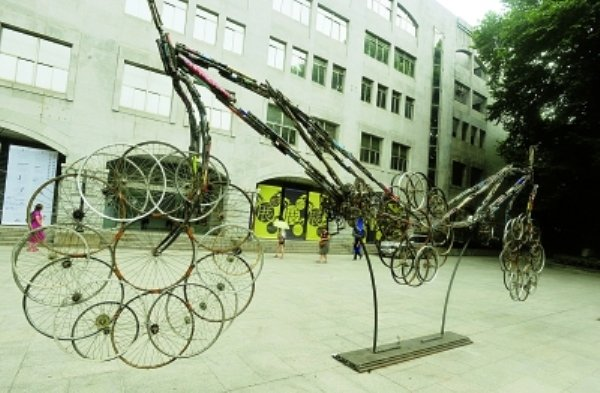 But that really shows how crazy bicycle use was in the 80’s/90’s –  Beijing still boasts a lot of two wheeled commuters today, and it’s explained by how well Beijing accommodates cyclists’ needs. If these cities can do it, there’s no excuse modern Beijing couldn’t with its extensive pedigree.

But what’s it actually like to cycle in the capital?

Beijing has lots of wide, separated cycle lanes on completely flat ground, and many e-bike rentals cheaply available to ride with – as a Welsh mountain biker you can sign me up! It’s not all good news though, as air quality is atrocious in the capital – most days of the year pollution is higher than the safe limit set by the WHO, so bicycle commutes are typically shorter as a direct result.

About 6km of Beijing’s cycle lanes are exclusive just to bicycles though. Even the earliest ones were 4 metres wide each, and the recent bicycle-only expressway weighs in at 6 metres across. That’s about 3 times wider than the standard in London. Why is Beijing called the “Bicycle Kingdom”?

China’s history with the bicycle has humble beginnings. William Sachtleben and Thomas Allen were the first to travel the world by bicycle in the early 1890’s, and were welcomed into the country by curious locals – many of whom had never even seen a foreigner before, let alone this newfangled contraption they were riding on.

It wasn’t until the early 20th century that bikes were being imported into the country, but they were a luxury most couldn’t afford at first. With the fall of the Qing dynasty in 1911 came the gradual rise of modernism  – and that meant the rise of the bicycle too. By 1930 Shanghai alone had 20,000 bicycles helping its residents deliver post, police the streets, and commute on the daily.

By the time the People’s Republic of China was established in 1949, bicycles had become integral as a fast, convenient way to get around in the congested 13th century fortress that is Beijing. That’s when the PRC decided to go all in on the bicycle. They wanted to turn Beijing into the ‘Bicycle Kingdom’, and the results were as staggering as they were influential to other cities.

To achieve their goal, manufacturing and infrastructure got turned up to 11, and by the 1960’s the bicycle was elevated into nothing short of a cultural icon. As a Chinese suitor at the time, you wouldn’t even be considered for marriage if you didn’t own a bicycle, and the ‘Bicycle Kingdom’ was born as a result of their hot-ticket status – by 1978 bicycle manufacture across the country had increased by 100 times to over 8.5 million produced annually.

How Many Bicycles Are in Beijing?

And the rest is history. Despite their decline in the 2000’s there are still a lot of bicycles in Beijing, and they’re there because the people of Beijing wanted them there. That’s a fact, a thing we can’t deny, like the fact Beijing will love them ’til it dies. However many billion light years we are from the edge of the next cycling evolution, Beijing will be the first to make it there. But…

Phil Clarke
A trained musician and avid cyclist; Phil's been dominating the Welsh countryside on two wheels ever since the stabilisers came off, and hasn't stopped since moving to London some 20 years later. He spends his time investigating all things music over at Music Nark.

A trained musician and avid cyclist; Phil's been dominating the Welsh countryside on two wheels ever since the stabilisers came off, and hasn't stopped since moving to London some 20 years later. He spends his time investigating all things music over at Music Nark.