Vulpine were the poster boys for urban cycling when they burst onto the scene with a beautiful selection of stylish cycling gear for commuters in 2012.

Sadly, their promise wasn’t fulfilled, as over extension following a big crowdfunding campaign and serious cash flow issues ended up with Vulpine being liquidated and sold to Mango Bikes.

And then things got even worse for the young brand when Mango was unable to turn things around for Vulpine and also went bust a couple of years later.

But now Vulpine are back with new owners, who are hoping to run and grow their brand sustainably and responsibly.

Their greatest asset, no doubt, is the excellent range of gear that they’ve inherited and they can now build upon. Rohan reviewed the Vulpine Rain Trousers not long ago, while I’ve been enjoying some more of their gear, including the Vulpine Merino Henley Tee, which I’m going to discuss here.

This is a simple, minimalist cycling tee, which I like.

There’s a very discreet Vulpine “V” logo on the sleeve, and a full logo at the top of the back. However, they are both in keeping this t-shirts simple style.

One little touch I really like in terms of style – and it’s purely for style – is the fact that the bottom of the four collar buttons is a dark charcoal grey, while the others match the colour of the tee. It’s just a nice little classy touch.

In terms of cycling functionality, there’s some classic Vulpine work on the Henley. The t-shirt has a dropped back, providing riders with extra coverage on the rear – but not so much that it looks like you’re wearing a dress when you’re off the bike.

There’s also a “jersey” pocket on the right Lumbar, with a button fastener. I’ve literally never used one of these as I try not to carry much and just my phone, wallet and keys in my trouser pockets. For more hardcore cyclists, though, this may be an appealing feature.

The Henley Merino T-Shirt has a kind of smart-casual vibe. It looks good with a pair of short, a pair of chinos or a pair of jean and I’d say that is slightly slim fit in terms of the cut of the body and sleeves. Again, something I like.

The other key feature of the Henley is the material: good old Merino wool (180gm Superfine 18.5 Micron). The stuff that keeps you cool when you’re warm and warm when you’re cool. It’s also odourless, breathable and fast drying – all useful qualities!

This is a very good urban cycling t-shirt. It’s comfortable and breathable when riding and looks smart of the bike too.

The RRP is a pretty hefty £80, but it’s currently available for a more reasonable £60 at Vulpine – which I’d say is a fair price for a premium cycling t-shirt for commuters.

The Vulpine Merino Henley Tee is available in grey (pictured), plus Charcoal, Green, Navy and Red and comes in both men’s and women’s fits. 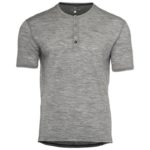