Having done several “Cycling in…” posts over the years on Discerning Cyclist, it came to my attention that I’ve never done one for my hometown: Liverpool.

So just how does Liverpool stack up as a cycling city? Is it safe? Is it easy to get around?

Well… as with most British cities, it’s a very mixed bag. Liverpool certainly isn’t a “cycling city”, but that’s not to say you can’t get around town on two wheels. The number of commuters by bike is also on the increase, with 62% more journeys by bicycle since 2006. This increase is thanks in large to Liverpool City Council’s 12-year ‘Liverpool Cycling Revolution’ plan, which was launched in 2014 and aims to get at least 15% of the population cycling at least once a month by 2026. 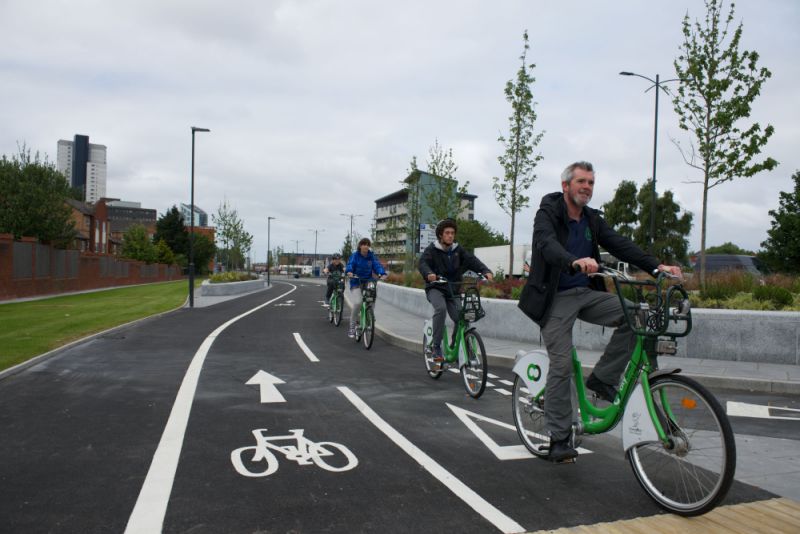 Indeed, since Liverpool was awarded European Capital of Culture in 2008, investment into the city has been rife – carefully bringing a cutting edge feel to the city, while respecting its significant heritage. And whether it’s shopping, sports, partying, concert going or other activities, people are always looking to see what’s on in Liverpool, and are rarely left disappointed with the offering.

But back to business: what’s it like to cycle in Liverpool city centre, and how is it cycling into the centre of the city?

EXCLUSIVE: Get £70 Off the Resolute Bay Reflective Cycling Jacket Here

As far as the city centre goes, there is a still a lot to be desired when it comes to cycling lanes.

However, there is a three-mile route running beside the River Mersey from the Liver Buildings towards Festival Gardens, which can be a nice way of reaching South Liverpool. 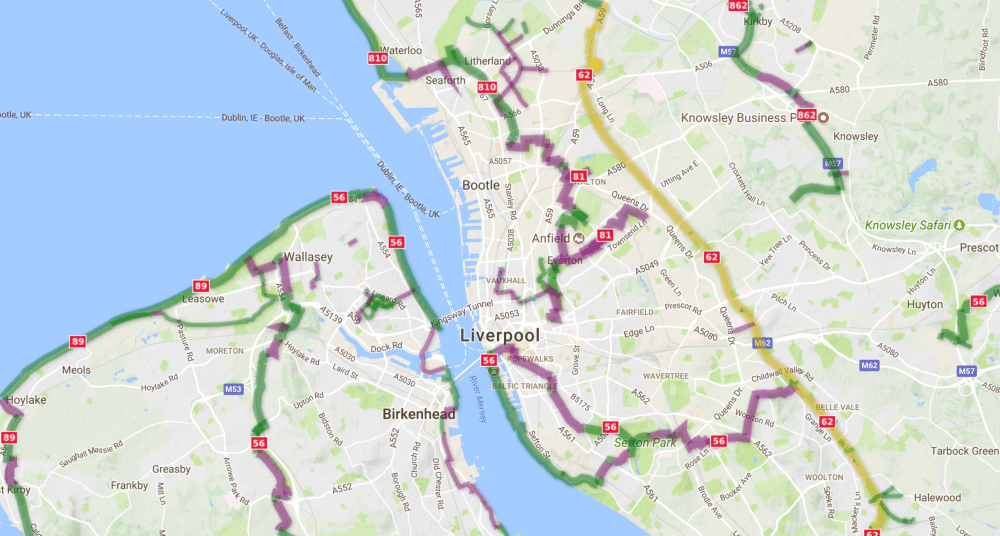 The only other significant bike lane of note in the city centre is ‘Route 56′, which makes up part of the National Cycle Network route from Chester to Wallasey, and then over to Liverpool on the ferry, before becoming part of the Trans Pennine Trail. The route in Liverpool starts near Liverpool One, before running up part Ropewalks, passed Liverpool Cathedral, through Sefton Park and on towards Liverpool Hope University – meaning it is a good way for Hope students to get into the city centre.

Unfortunately though, most cycling in the city centre will currently see you forced to mix it with other traffic without any designated space for cyclists.

That said, plans are afoot as part of the Liverpool Cycling Revolution to create a multitude of routes with designated space for cyclists feeding in to the city centre from all other major urban areas of the city. A diagram of the planned cycling routes can be seen below. 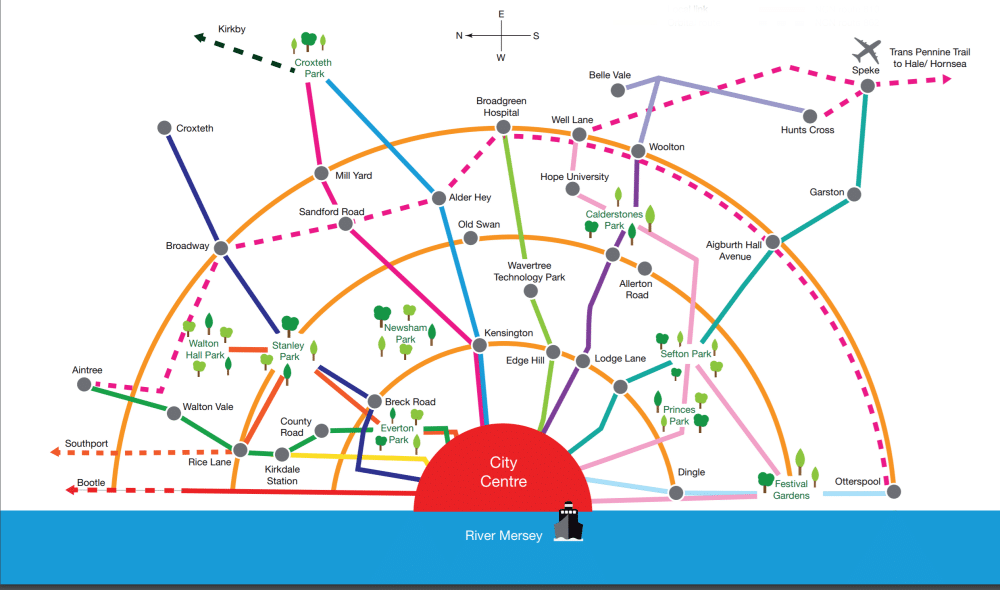 Outside the city centre, it’s a very mixed bag. And I saw mixed in a not particularly positive way. There are currently routes around the Anfield and Litherland areas of Liverpool, but vast swathes of the outskirts are left untouched, with the likes of Wavertree and Kensington in desperate need of improved cycling infrastructure.

One of the Liverpool’s cycling innovations that has proved a great success is the CityBike hire scheme, with a good app helping make it very easy for users to pick up a bike. Day access to the scheme is £1, with the first five minutes of any trip being free. After this point, a charge of £1 per hour used is applied to the bike, before it is returned to one of the many stations dotted comprehensively around the city edge-to-edge. Alternatively, if you want to use the bikes over a longer period, you can get week long access for £5 (plus the hourly rate), or £55 for the entire year, with which the first 30 minutes of all rides are free.

As well as the usually suspects (Evans and Giant) there are some really great independent bike shops knocking around Liverpool, who can provide you with friendly, helpful advice,  assist with pairs and of course sell you a bike or 10. Some particularly recommended bike shops in Liverpool are Picton Cycles in Wavertree and Quinns Bike Centre nearer the heart of town.

Where to Lock Your Bike in Liverpool

One of Liverpool’s biggest strengths is the availability of places to lock up your bike in the city centre. There are various locations around the pedestrianised Lord Street where you can lock your bike, while more secure bicycle parking is available at QPark in Liverpool One, as well as lock station inside Liverpool Central train station, as well as excellent secure CyclePods in the city’s main train station, Lime Street.

So there we have it… cycling in Liverpool is very much a work in progress, but over the next decade we should see significant improvements to what is currently a basic cycling infrastructure across the city.

COMMENT BELOW with your experiences of cycling in Liverpool, as well as your opinion on the best places to cycle in the UK (and why).