Will Riding an Electric Bike Get Me Fit? [ANALYSIS]

Electric bikes have become hugely popular and are available across the globe. Not to mention that they are also a greener way to commute or travel than a car.

But, is it cheating at cycling like some people claim or can you still get fit, lose weight and maintain a healthy lifestyle by riding an e-bike instead of a normal non electric bike?

What is the Point of an Electric Bike?

The main point of electric bikes is transportation and accessibility. Allowing the rider to travel further and for longer in comparison to a non-electric bike for the same energy expenditure.

Comparably, e-bikes are popular among all ages, but due to their accessibility, are particularly popular among older riders or those with health issues who need the added support as well as assistance which an e-bike provides.

Additionally, electric bikes are also quicker than the average bike due to it’s pedal assist motor, making them a great alternative to driving and public transport, especially for commuters.

Can You Get Fit on an Electric Bike?

Cycling has many health benefits and getting fit involves exercising, electric or not, riding a bike of any kind is exercise and therefore simplified will help towards getting fitter and healthier.

Similarly, one study found that physical activity gains that were made from active travel are similar in e-bikers and cyclists, thus supporting the idea that exercising on an e-bike can gain similar health benefits from that of a normal bike.

Moreover, this conclusion was also supported by another study which concluded riding a 3 mile commute on an e-bike met the intensity level associated with healthy physical activity which was recommended by the World Health Organization and the ACS.

Therefore, according to the science, you can get fit while riding an electric bike, which may be due to the reasoning that the perceived effort is less, making the initial commitment of riding regularly more manageable and less overwhelming.

Can You Lose Weight Riding an Electric Bike?

However, it’s important to note that whether riding a normal bike or an e-bike, weight loss will only be possible if the rider’s lifestyle and calorie intake aids the reduction in weight. But in general, riding an electric bike will help weight loss.

Likewise, electric bikes can also be ridden as a normal bike with the pedal assist functions of; therefore, as they are heavier than a normal bike, could double up as a more efficient way to help lose weight as riding a heavier bike will burn more calories.

But, overall one study has shown that e-bike riders take longer trips by e-bike than other cyclists and will often use it more often and for greater distances, which therefore can mean that it may actually be better than a normal bike.

How Many Calories Do You Burn Riding an E-Bike?

The calories that are burnt while riding an electric bike will differ depending on a few factors, including: the setting the motor on, the terrain being ridden on, the weight of the bike and of course how far is ridden.

However, substituting all car trips with an e-bike can lead to a gain of 550 MET (Metabolic Equivalent of Task) minimum per week, which has been relieved by one study. Therefore, regular e-bike use could make a big difference in the long run.

But, overall it is important to note that riding an e-bike is easier and warrants less energy, so over the same distance and terrain you’ll burn less calories compared to a normal bike. Though, exercise of any type still burns calories, therefore helping towards weight loss.

The table below shows the difference between the estimated calories burnt by a person when riding an e-bike as well as a normal bike, which has been calculated using a 70kg person.

How Much Help Does an Electric Bike Give You?

The help that electric bikes offer is limited for safety reasons by UK and EU law to a pedal assisted 25kmp / 15.5mph, alternatively in the US the law allows the pedal assisted speed from the motor to be slightly more, at 32kph / 20mph.

Therefore, along the flat an electric bike can go at a very reasonable pace, but they really come into their own when going uphill, this is when the electric bike motor will be the most noticeable.

However, the speed will depend on the level and setting used by the rider when using the bike. For example, the lower settings will offer less assist than the sport settings that will help achieve the maximum pedal assist speeds of 25kph.

Although, it’s important to point out that electric bikes are only pedal assist and can still be ridden without the assistance of the motor. Therefore the level of help, if any at all, is in the rider’s hands.

Will Riding an Electric Bike Get Me Fit? [CONCLUSION]

Therefore, riding more on any type of bike will improve an individual’s fitness levels and ability to exercise as well as aid weight loss if in conjunction with a healthy and balanced lifestyle.

Moreover, as one study concluded, using e-bikes can benefit individual health, as well as reduce congestion and pollution from gas-powered vehicles.

So not only does using an electric bike help towards the riders fitness but also helps ease pollution. 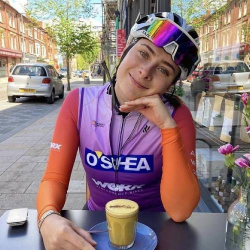