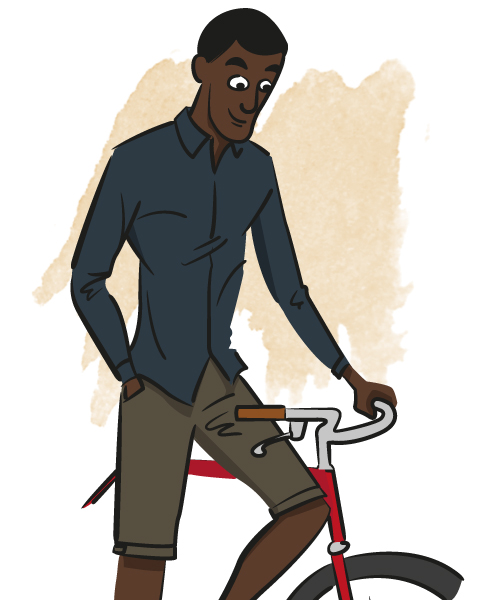 Having swapped my clunky old hybrid for a beautiful (and very discerning) Cooper Kyalami to tackle my central London commute, it quickly became apparent that the least stylish thing on my bike (by quite some margin) was the rider. To help alleviate this, I decided new shorts were in order; my baggy old hiking shorts from The North Face weren’t really cutting it anymore.

When looking at cycling shorts, you’re generally presented with two options: baggy or bib? I wasn’t interested in either of these, but instead wanted a smart-looking pair of shorts that were comfortable to cycle in. After receiving many helpful suggestions from Ste on things to look into and trying on Rapha’s Touring Shorts, Nick from Vulpine piped up on Twitter to say that his company’s shorts were nearly ready and they were “one of the best things [they’ve] done”. Intrigued, I decided to hold on to see what they had in store. Were they worth the wait?

Well, in short, (spoiler alert) yes, they’re lovely. However, they weren’t exactly what I expected; they came with many nice surprises, as well as a couple of not so nice ones, all of which are well worth discussing. 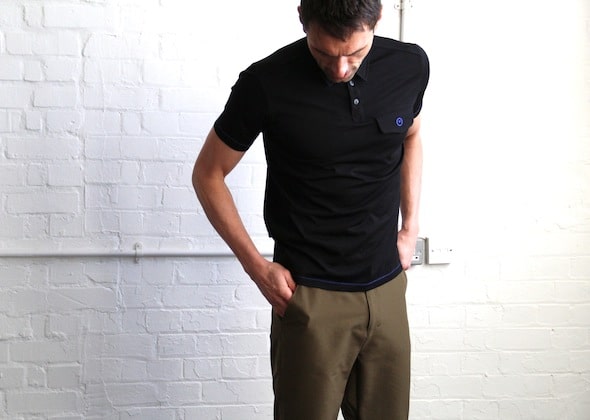 Simple and clean in design, but with lots of little details to elevate them above your average pair of shorts, they were exactly what I was looking for. The slim cut and the turn-ups at the bottom say “this is not a pair of cycling shorts”, while an abundance of clever hidden touches secretly provide everything you need for a great ride.

The fit (for me at least) is perfect. More comfortable than my old baggy shorts despite being much sharper looking, they never feel too tight when riding, and they catch far less wind than baggy shorts do. Sitting just above the knee, they’re very unobtrusive when riding to the point where you don’t really notice them at all. Good design is invisible and all that. 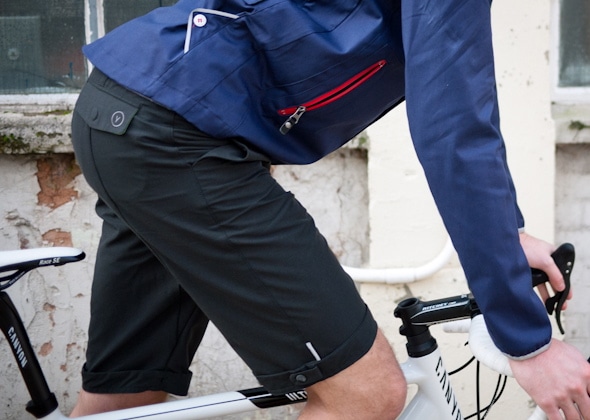 The shorts feature four pockets, two at the front (cut high to prevent things falling out), one at the rear, and one zipped pocket inside the left pocket. The rear pocket is covered by an ingenious magnetic flap, which snaps closed automatically keeping your stuff safe.

Underneath the flap is a reflective loop that you can attach a light to, and the flap itself can be tucked inside the pocket out the way when doing so (it even attaches magnetically when tucked in). Inside the right pocket is a key carabiner so you never have to worry about losing your keys when on the road.

Inside the waist, a silicon band helps prevent your shorts from slipping down whilst riding, and outside the waist you can adjust the fit for extra comfort. Similarly, they can be adjusted at the bottom to give an extra-tapered look should you wish. 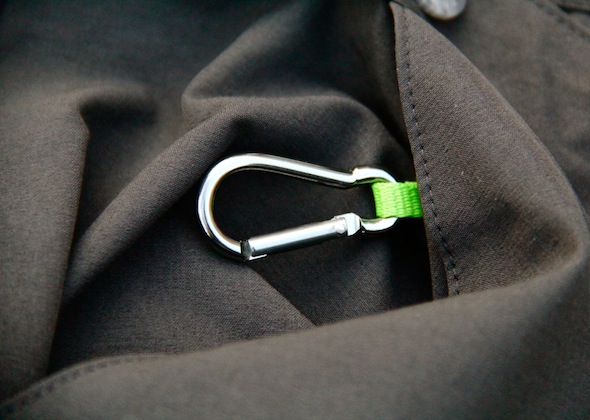 All of these little features add up to deliver a fantastic on the bike experience, bringing all sorts of neat touches that I’d never thought of myself, but I’m very glad someone else did.

Off the bike, however, things aren’t quite perfect. The main issue when not riding is the fabric, which is 94% nylon and 6% spandex. It’s very water-resistant and performs commendably, but it doesn’t quite look, feel, or (most crucially) sound like something you’d wear if you weren’t cycling. A noticeable rustling comes from them when walking, which stops them from being an ideal choice when off the bike.

My disappointment in this area is probably mostly down to expecting something a bit different. I was originally looking for a pair of shorts which were a good compromise between cycling performance and off-bike style; half bike shorts, half regular shorts, if you will. Vulpine’s shorts don’t compromise in this way. What you get instead is a pair of extremely high performance cycling shorts that have been tweaked to look as good off the bike as possible without sacrificing the on-bike experience. This turns out to be a much better proposition in a number of situations. For touring, they’re absolutely ideal, you’ll have a supremely comfortable ride all day, and they’ll still look great when you stop for lunch. For commuting they’re very good too, assuming you’re getting changed when you reach work, and they won’t look out of place if you stop at the pub for a quick half or a Radler on the way home. For a long, sunny Saturday, pottering about the city, visiting friends and hanging around in a park chucking a frisbee around, I’m not convinced. If your day is going to be more off the bike than on, I’d instead recommend something cotton-based (or Epic Cotton-based) as they’ll look and feel better when not riding.

Another surprise was build quality. Disappointingly, it doesn’t seem as though the same level of attention to detail has gone into the manufacturing as into the design. My pair have several stray threads coming out of them and the button at the top of the fly appears to be coming loose after just a month of fairly light use. There don’t seem to be any serious flaws, and I expect they’ll last fairly well, but at £115, they seem a bit more rough around the edges than perhaps they should.

Which brings us to the price. £115 is clearly towards the top end of the market for cycling shorts. The premium is definitely accounted for by the amount of thought that has gone into the design, Vulpine have come up trumps with all sorts of clever little details tucked away in these shorts, and the fit is superb. It’s just a shame that the end product just isn’t quite all it could be, mostly being let down by several instances of imperfect stitching that you don’t expect to see in this price bracket, making them harder to recommend.

However, these issues don’t change the fact that they deliver a fantastic ride, if you’re looking for a smart pair of shorts for touring or commuting that still deliver comfort and a host of cyclist-friendly touches, they’re definitely worth a look.

After writing this review, but prior to its publication, I got in touch with Vulpine to explain the issues I’d been having with the shorts. A replacement pair was immediately sent, with no quibbles whatsoever. Really friendly service. The new pair don’t have any of the build quality issues I’d experienced with the old pair, and I’m really happy with them.

This was a guest post by a fellow Discerning Cyclist, Neil Littlejohns, who you can find on Twitter @nlittlejohns.

Latest posts by Guest (see all) 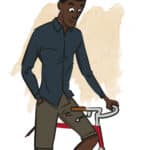