This year I’ve become obsessed with “Essentialism”. It’s the idea of only focussing on the things you truly need/enjoy, as well as a system of prioritising the stuff you really care about.

For a lifelong clutterer and “busy” person, this means I keep my desk clear; I spend my time trying to achieve my goals; I buy only things that will provide me with true value and I travel as lightly as possible.

Last month I went to Georgia (the one next to Russia, not the American state) on a road trip with two friends. I challenged myself to see if I could go on the road for three weeks with just one moderately-sized 20L backpack – something I could fit in hand luggage.

Considering I work when I travel, this means I have to bring my “tech” with me – making travelling lightly a challenge. But here’s what my essential travel packing list was whittled down to:

Now, the biggest challenge with carrying such a small bag for so long is shoes. Shoes take up a lot of space. So, I wanted to see if I could travel with just one single pair – i.e. the ones on my feet.

Last year I backed the Vessi Waterproof Travel shoes on Kickstarter, and having arrived just a few weeks earlier, I decided that these would be the shoes I would travel with.

Why did I back them on Kickstarter? For two quite simple reasons: they are waterproof and look good. 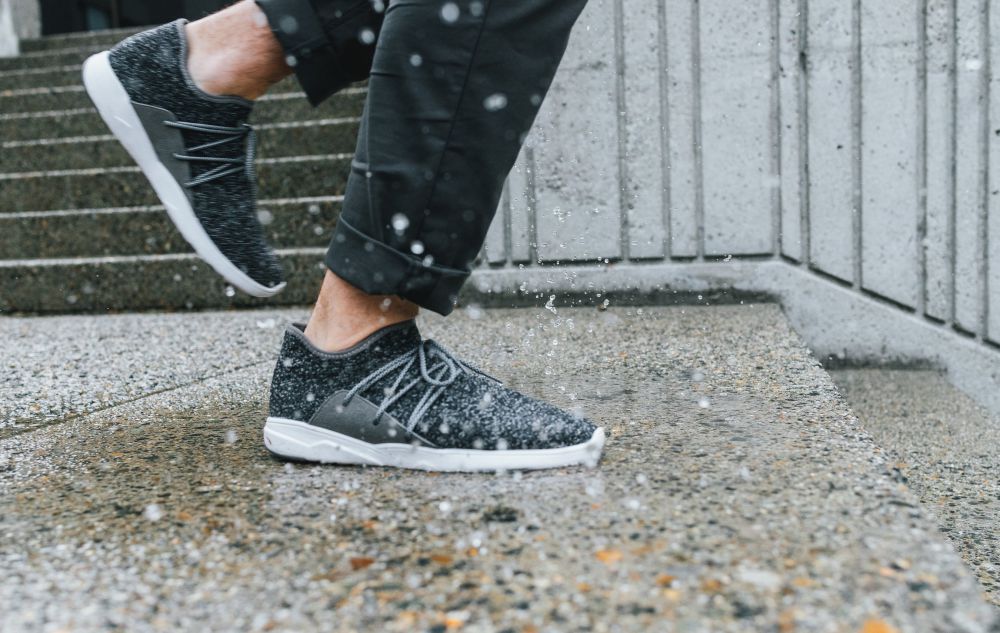 For commuter cyclists, there can be few worse things than dealing with soaking wet feet after a rainy ride. Therefore I’ve been on the lookout for a while to find a nice pair of waterproof shoes for urban cycling. No clips and whatnot, just casual every day shoes that will stay dry.

And, with travelling in mind, I wanted a pair of waterproof shoes that I could: go hiking in, go running in, go cycling in, go to a restaurant in and even go to a bar in… so it’s not like I was asking for a lot. Just a waterproof trainer that was comfortable, practical and versatile. Easy peasy.

So, when Vessi popped up on Kickstarter last year I dived straight in. They’re casual looking, but they don’t look especially sporty, meaning you might just be able to pull them off in somewhat formal establishments. But did they meet my hopes and expectations?

My first impression of the Vessi Cityscape shoes was positive. They are a decent looking pair of shoes and are very comfortable even on the first wear. They’re also remarkably light.

I have wide feet, which can mean some shoes – especially sports shoes – can be uncomfortable on first wear – but Vessi’s shoes are well-built for the wide-footed of us.

Now I should mention that Vessi’s shoes aren’t plasticy or even coated in waterproof sprays – they’re a knit shoe that use a special three layer technology that keeps water out, while also allowing your feet to breathe. In theory, this means that they’ll remain waterproof for their entire lifespan.

The first week of wearing the Vessi Cityscape shoes saw me put them through the urban challenges: running, cycling and exploring the city during the day, followed by eating out at restaurants in the evening and maybe one or two (…) beers in a bar afterwards. The shoes excel for urban exploring, although it must be said that they are very casual looking. My friend Dan even said to me they looked a bit like slippers – and he’s got a point. But they also feel like slippers – in the best way possible.

One slight comfort criticism I’d make of these shoes, though, is that the laces can dig into the top of the foot if you tie them quite tight. Otherwise though, they were a roaring success in city life.

But how did they fare when exploring the Georgian wilderness: hiking up mountains and along rivers? 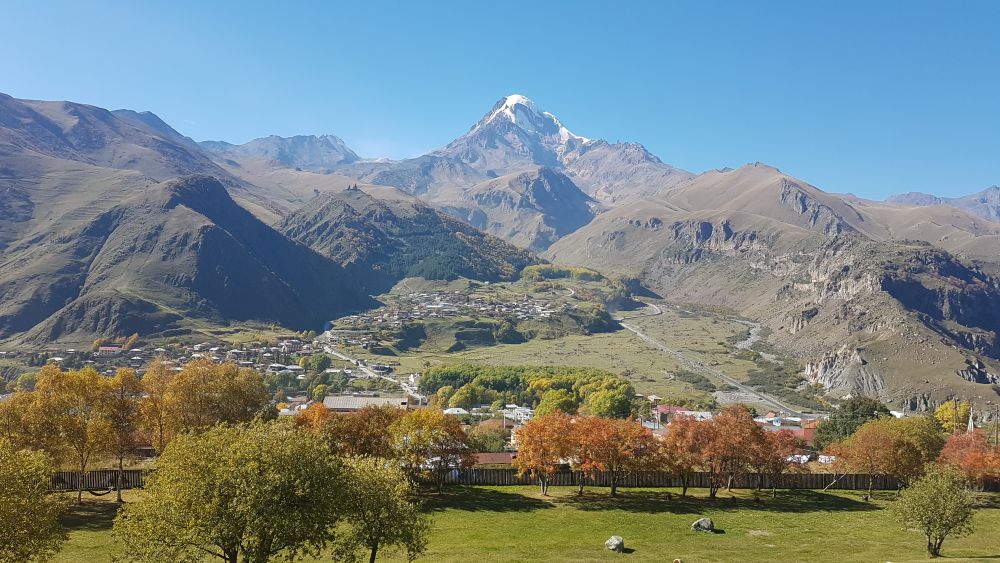 My other explorer friend, Tom, who actually lives in Georgia, told me to bring some walking shoes ahead of the trip. I scoffed, and told him all my shoes are walking shoes.

So, when he saw that I was being serious about wearing what Dan had labelled “slippers” ahead of the first hike up to a monastery in Kazbegi, he looked at me like I was a maniac about to be scorned. 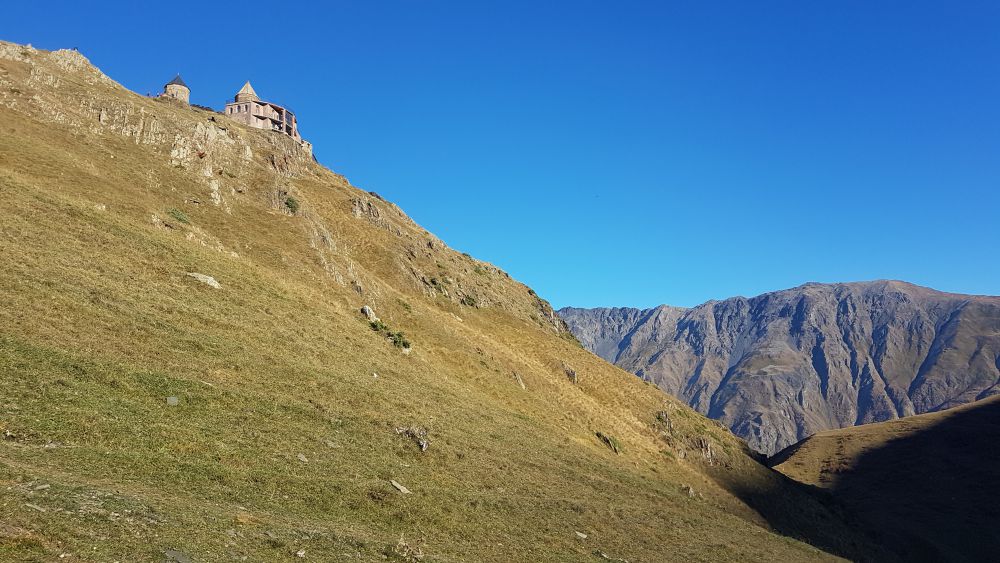 Fortunately for me, three hours later my feet felt light and fresh. Unfortunately for him, he complained that his shoes were rubbing his ankles. Humbly, I laughed in his face. A win for the slippers.

A couple of days later, we faced another mammoth hike. This time up to a waterfall in Lagodheki. Tom mentioned this was a bit more of a challenging “hike”. Upon arriving at the start of the path, a sign pointed in the direction of the waterfall reading ‘4.5km’. Expecting a four-hour loop, Dan and I agreed that we should be able to smash this out and be back to the car within a couple of hours. Tom stayed knowingly quiet. 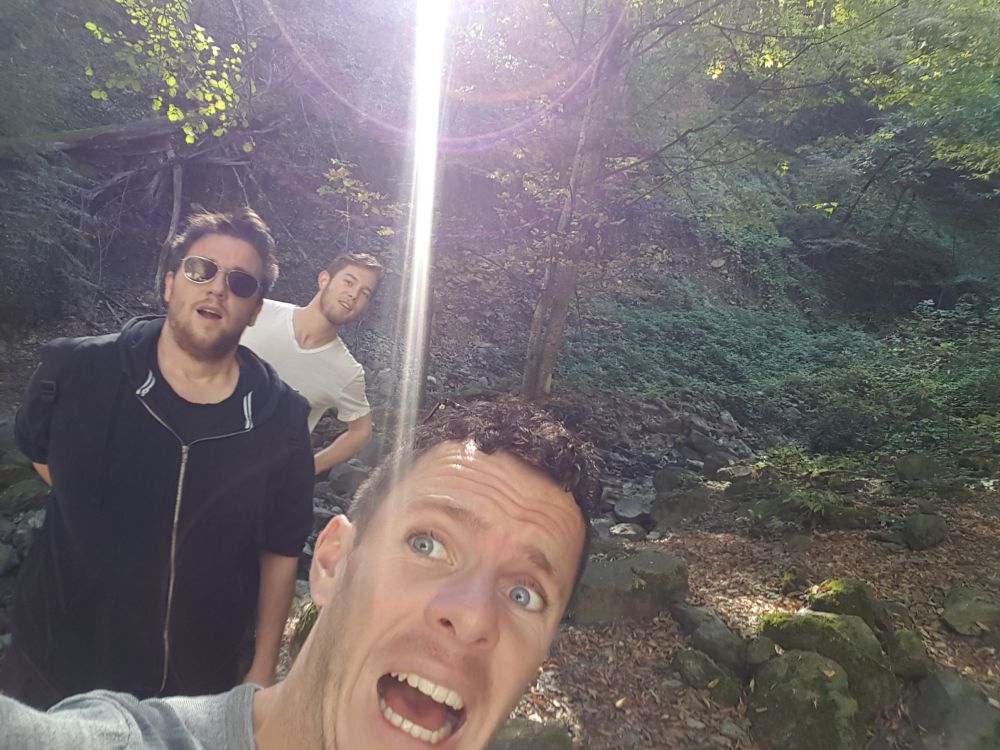 It quickly became apparent that this was no regular dry-foot hike. For the peasants in walking boots and regular trainers anyway. The waterproof Vessis, meanwhile, stood up to their first true of water resistance wonderfully, staying bone dry on the inside while submerged in a couple of inches of water and plenty of splashing. 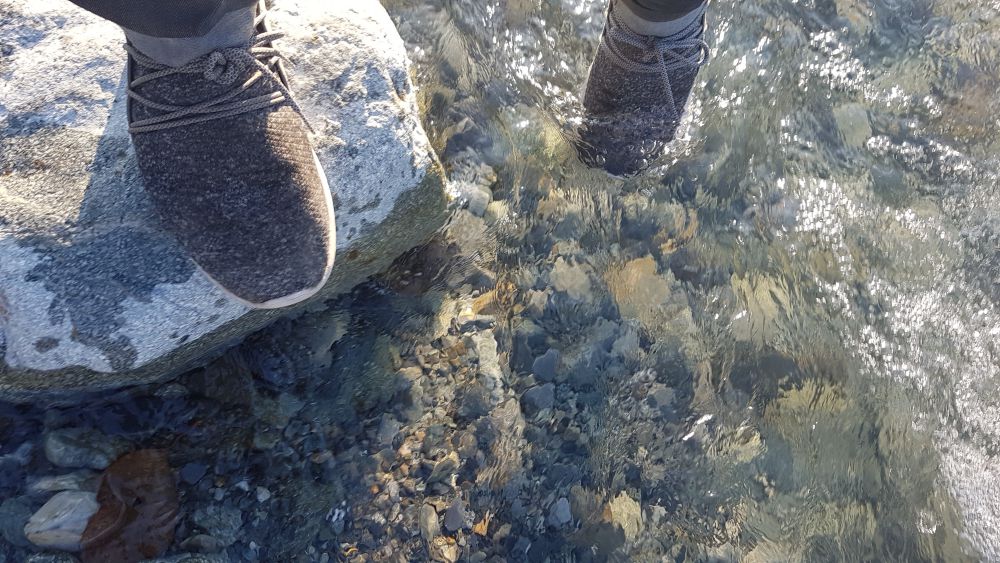 However, after 45 minutes-or-so, the option of splashing through shallow water dried up. The next stage of the hike was on the other side of the river with no way of getting across without being waist-deep in water.

Knowing that I was going to have to get wet anyway, I decided to do so in style… with a trademark Pete bellyflop. 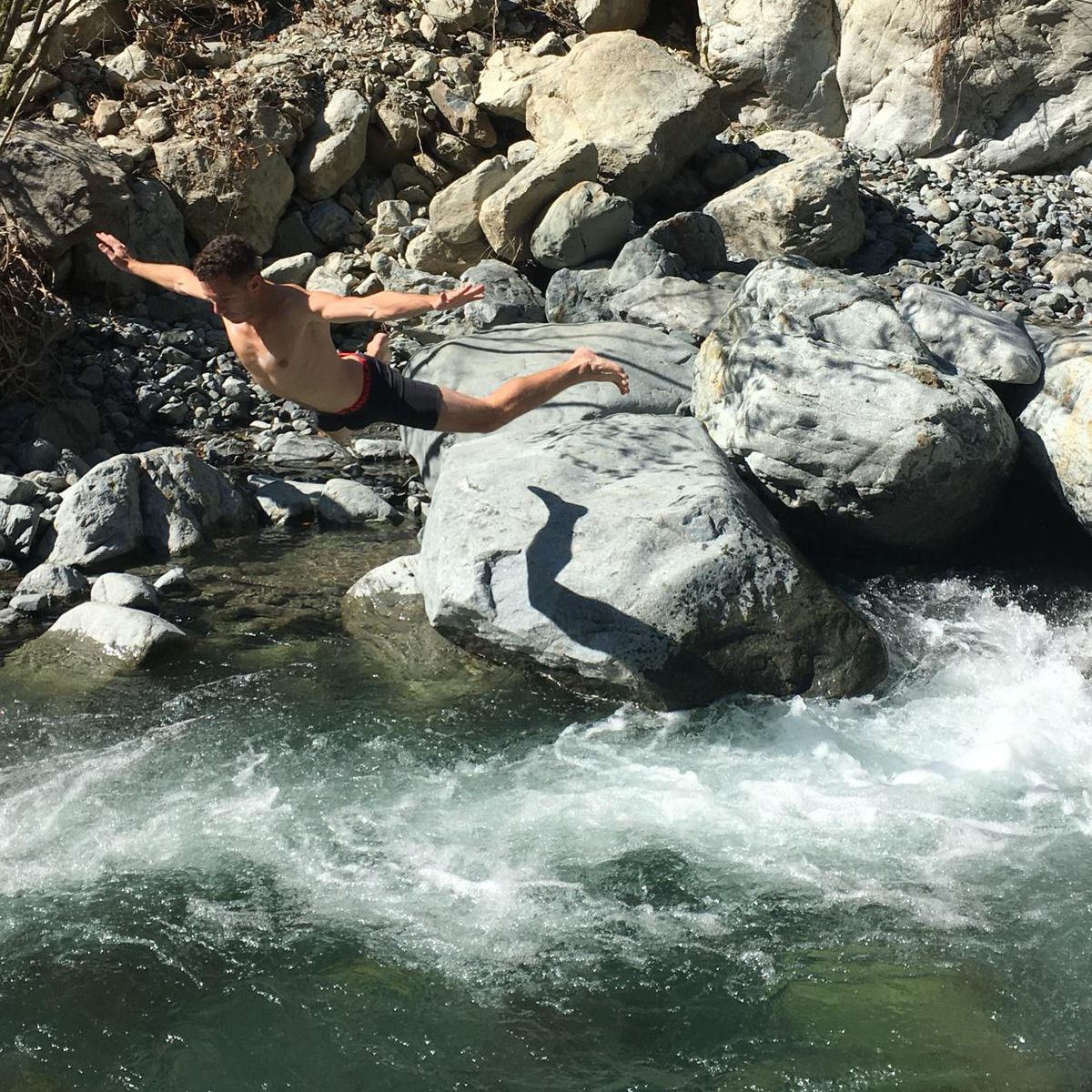 On the other side I popped my Vessis back on and continued the hike – the rest of which needed much more traversing of the river.

Now freezing cold (who knew mountain rivers would be chilly?) I decided against any more showman antics, and instead attempted the second crossing in more conventional fashion. In my underwear with my shoes on – a very fetching look. We made it across the river, inevitably taking on water in my shoes by entering down my ankle. Waterproofing goes two ways, though – while it won’t let water in – it also won’t let water out. So I popped off the shoes to empty them out and unleash my own mini waterfall.

Nevertheless, we made it up to the waterfall and what a scene it was… 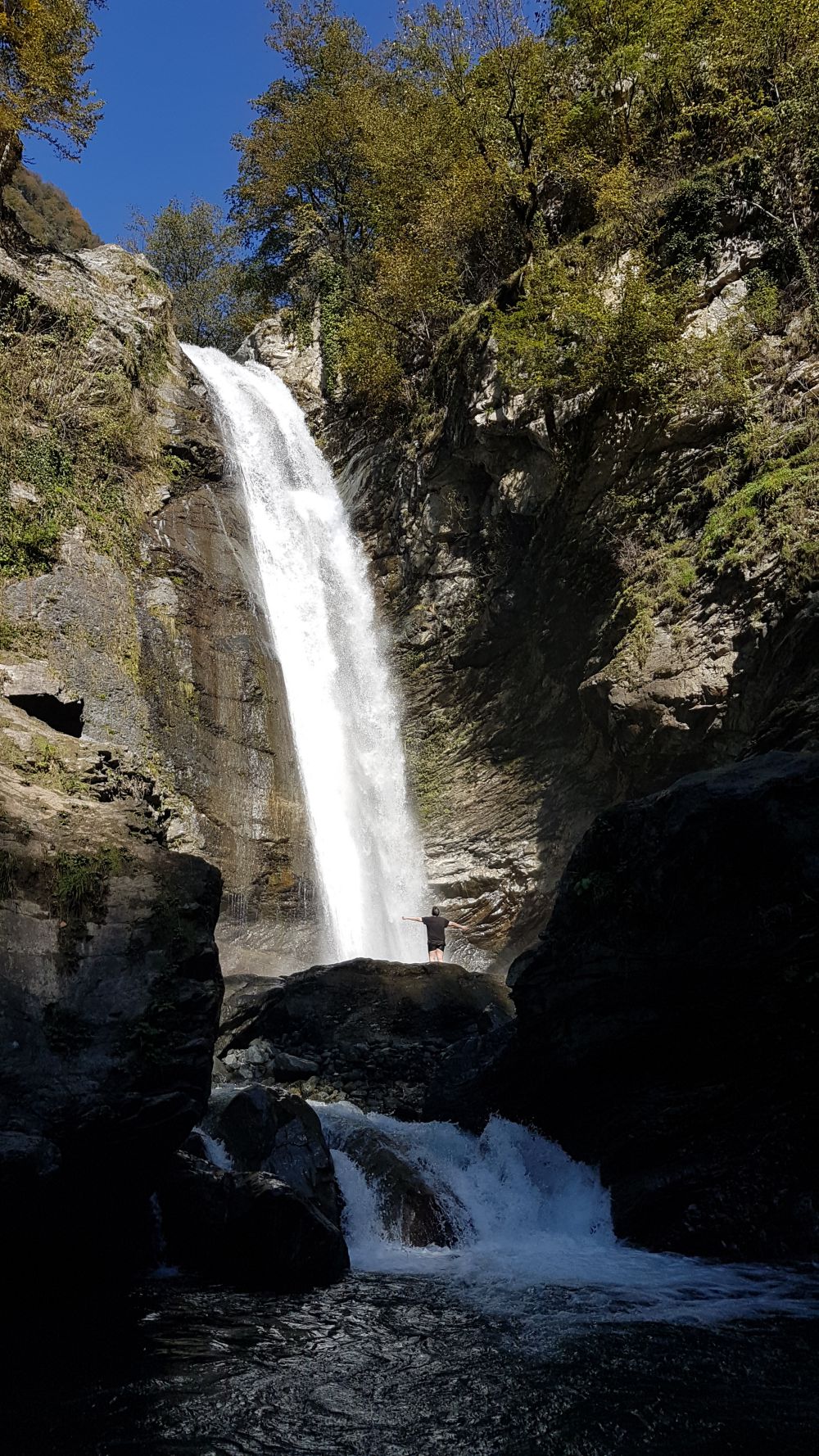 Over four hours later, we returned back to our car – cold, wet, but satisfied.

However, on the way home, I realised I may have a problem… I’ve packed one pair of shoe for the trip and I’ve just been swimming in them. In order to try and speed up the drying process, I took them off and packed them full of unwashed socks to help absorb some of the lingering moisture.

Impressively, by the time we’d returned to Tbilisi around three hours later, they were dry enough to wear again as we headed out to as restaurant for our 459th khachapuri of the week.

For the remainder of the trip, I continued to wear my Vessi Cityscape trainers and they continued to do a great job. While they’re a push for more formal occasions, they are suitable for just about everything you can think of when travelling or day-to-day life. They can also be packed flat very easily – taking up little more space than a pair of flip flops. For me, these are the ultimate travel shoes, and I couldn’t recommend them highly enough – especially when you’re tight on space with lots of adventure planned. 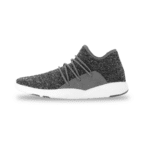