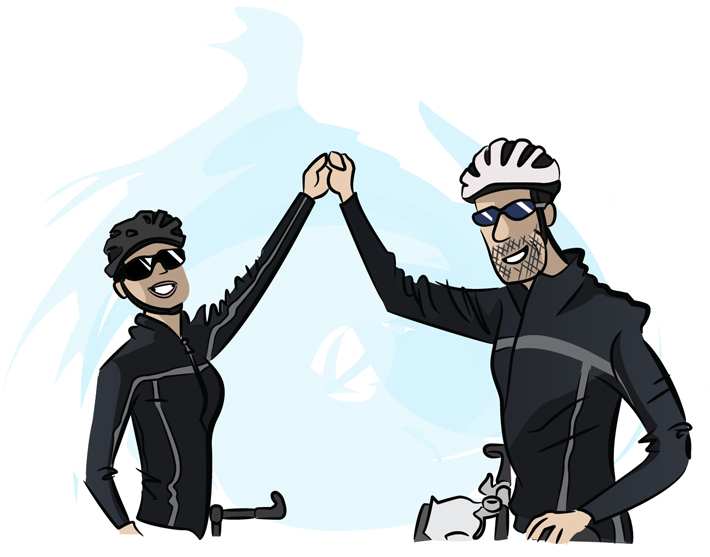 Who remembers Blind Date? With ‘our’ Graham and Liverpool’s own Cilla Black? Of course you all do, right? I just checked wikipedia and it ran for nearly 20 years! As my memory serves through the entire series I think only one couple carried on after the show ended through to those holy vows we popularly like to call marriage. So marriage-wise I’m taking that as statistical proof that blind dates are not very successful.

So how amazing is it when you hear of a couple who got married after meeting on a blind date! I’ll let Liz, one half of VeloVixen, explain;

“We (Liz and Phil) were set up on a blind date in mid-2009.” she starts “you could say it worked out, because we both quit work a few weeks later to go on a year long cycling adventure together in early 2010. We rode over 10,000km unsupported, most of the length of South America and the USA.” Obviously they were 6 years too late for Cilla so this was a brilliant leap of faith and how fantastic that these two people would hit it off that well they would take up such a committed and breathtaking (in every sense of the word) endeavour which didn’t stop with with the bike ride.

Liz finishes: “On our last night in Buenos Aires, Phil proposed. We got married 3 months later, and started a family – and a business.”

I suppose spending a full year together doing nothing but pedalling and seeing the sights from the mighty continent of the Americas is a serious sign of commitment. So marriage, then starting VeloVixen, then starting a family (courtesy of very cute 10-month old Zoe) would probably impress you enough and if I was to end this profile here you’d certainly say this about the Binghams, passionately determined! 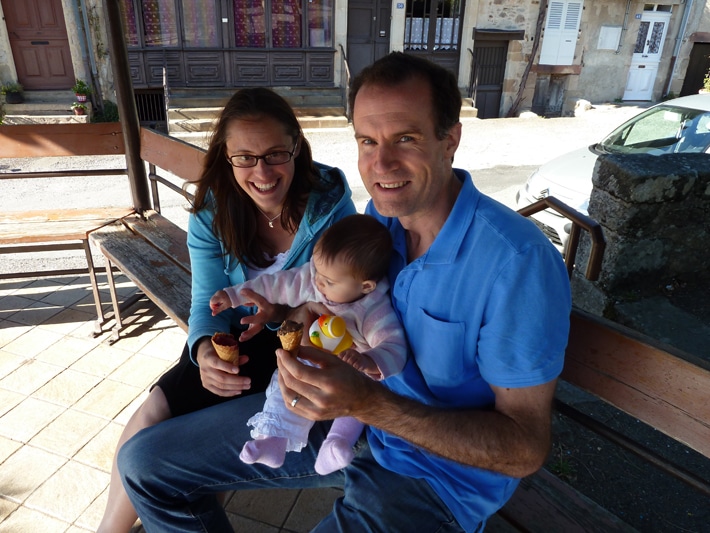 So after their mighty cycle the decision to set up a cycling related company was agreed on and as Liz explains, VeloVixen was born out of frustration at the lack of clobber available for women “VeloVixen was inspired by our trip and the experience I had finding the right kit for it. We both had to choose our minimal wardrobes very carefully since we were carrying everything on our bikes. Every gram counted. I found shopping in mainstream bike shops frustrating and the choice for women often unsatisfying.”

“You have a lot of time to think when you’re cycling 7 hours a day through wilderness. We realised that here was a huge opportunity for the growing women’s cycling community to be so much better served. There are wonderful designers and suppliers out there. In many cases, they are inspiring and talented women entrepreneurs, whose great products we wanted to showcase and make more easily available.”

“When we got back, the research and conceptualisation began. We spent months looking at the possibilities, and designing the look and angle that we would take. Since VeloVixen has been up and running, we’ve had really positive comments. We’re keen now to really push on and make a big mark.” 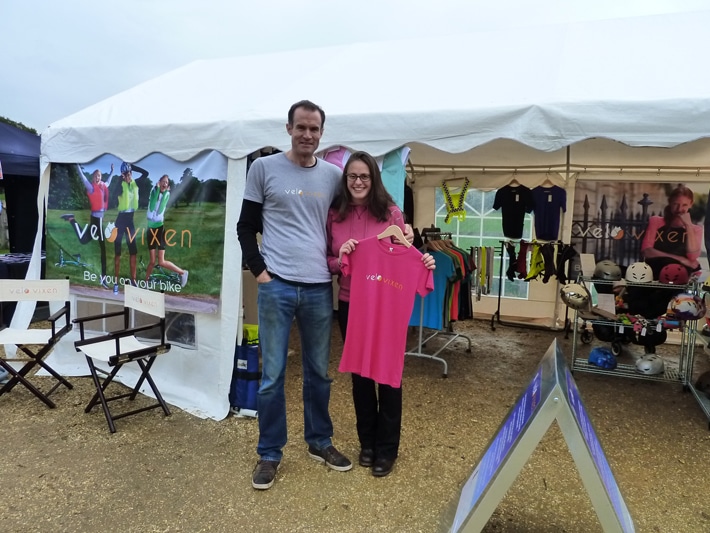 A big mark indeed! Since first speaking to Phil and Liz in October I’ve seen VeloVixen’s popularity and exposure go up and up and it’s got to be partly attributed to their positivity and love for what they’re doing.

Phil tells us that the choice to target the women’s cycling clothing market was confirmed during the research stage; “I’m a guy, and it was only researching kit with Liz that I realised how easy I’ve had it.” Now to interject here I personally believe men’s styles still need some options as a lot is repeated but that’s nothing compared to the lack of choice women seem to be faced with. Phil continues “men have a bewildering choice of accessible kit for cycling. Women don’t. And we couldn’t find many retailers who were covering that ground really well. There is a much clearer opportunity to make a difference in the women’s cycling world.”

Liz adds “We wanted to prove that just because an item’s for women, it doesn’t have to be pink, and it can combine fantastic design, practicality and style. We wanted to appeal to established, passionate cyclists as well as to women who might be lured back onto their bikes if they felt more positive about their cycling. And we wanted to help to make everyone feel part of the budding women’s cycling community: from occasional recreational riders, through regular commuters to more competitive cyclists”

Cycling as a hobby has had to come to a halt for the time being as Liz and Phil focus on VeloVixen, since their momentous trip both are keen cyclists. It would be fair to say Phil more so;

“I spent 12 years commuting by bike, and did a couple of recent Etapes du Tour. I also did Land’s End to John O’Groats with some friends a few years ago, and went through the triathlon distances to an ironman in 2005. But I’d never been a club member or been a sportive regular. And I certainly hadn’t ever taken on anything like our trip.”

Whilst cycling may not be possible as much at the moment for Liz, she still has a keen sense of style for cyclists and describes her own look on the bike as dependent on where she would be riding too and it’s clear function is important as well as getting more women on their bikes “It all depend… getting around town, pretty much any clothes will do. You can be as stylish or scruffy as you like. That doesn’t sound like a very businesslike response, given what we do for a living! – but the reality is that it helps us all to reduce the perceived hurdles that stop women getting on their bikes.”

“More practically, at this time of year, I find layering is more effective to stay warm than one big thick jacket. Layers of cotton or merino, and a waterproof, windproof top. A fleecy layer can help on the really cold days. Decent gloves are key, and a neck warmer can keep the draughts out.”

“It’s so vital to be safe and visible – it’s a personal choice, but I wouldn’t ever go out without my helmet. Fortunately, they can actually look quite stylish these days. If you’re not a fan of hi-vis, there are plenty of more muted clothing items that light up really reflectively when headlights catch them. It also means you don’t have to look like a ‘cyclist’ when you arrive for that vital meeting or coffee appointment. The VeloVixen range tries to promote the idea that cycling can be part of your life, rather than having to dictate terms to you.”

“For longer distances (say more than half an hour or so) you really need kit that’s designed with cycling in mind. But that’s not to say it has to be ugly. We used merino throughout our trip, and it was frankly magical – comfortable, warm when you want it to be, cool when you don’t, well designed, hard wearing and (importantly) not smelly!”

“Oh, and never underestimate the importance of well fitted cycling shorts if you’re going any kind of distance…”

Going further to the general look of current cycling clothing trends Liz adds “There’s no reason not to look great on a bike if you choose to, and to be comfortable, dry, warm and efficient at the same time.”

“Our whole raison d’etre is to bring together the stylish stuff under one roof, but style over substance is a non-starter for us. Fortunately, we’ve found that much of what we’ve come across works exceptionally well from a technical perspective too – and that’s the only way it gets considered for our range.”

Liz also touches on one particular side problem to wearing a helmet, “solving helmet hair remains the holy grail within the world of cycling style, of course, a bit like finding a cure to the common cold… That may take a while yet.”

Phil sees the cycling community as really getting its sartorial groove on “The cycling world is becoming more stylish, no question. And that’s not ‘cycling’ stylish meaning bright colours and lycra, but stylish as in things you can be seen wearing off the bike as well. It’s a noticeable movement, as cycling becomes more mainstream. There are plenty of talented young British designers coming up with some great women’s products along these lines, and it’s noticeable that many of the bigger manufacturers are joining in too. Some even have women-only design and testing teams. The train appears to have left the station, and momentum is growing.” 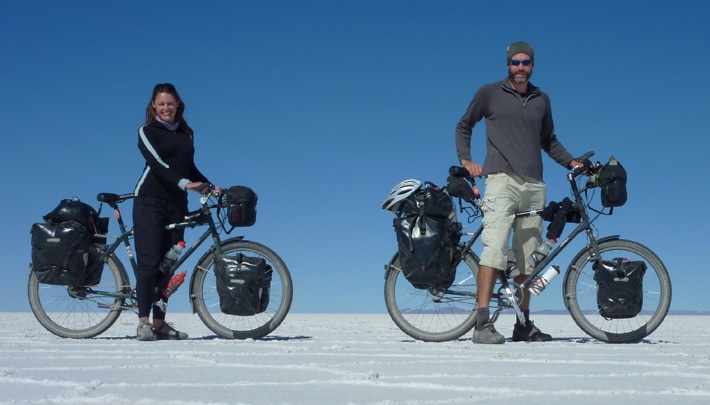 It is simply a spectacular story that Liz and Phil have come together and achieved what they have achieved so far and they’re not sitting still or slowing down. Plans are there to establish their brand and push it further in the future. Phil tells us “In the very short term, we are focused on putting together the best possible collection of existing products. We are cherry-picking a really high quality range, and one that will continue to evolve as more women-specific products are designed and launched.”

“As a part of this,” Liz adds “we’re keen to accelerate development of our own branded range over the winter. We’ve already dipped a toe in the water by producing some great VeloVixen t-shirts, and we’ve deliberately created a name and logo in such a way that it will look great on all kinds of other products. We want it to help to bring together women cyclists in a stylish, sophisticated way that will look great.”

Phil finishes by saying “having said all that, we don’t want to sacrifice quality to get it out there. We want to make sure the quality is really top notch, and that means plenty of design research and discussions with potential manufacturers. Watch this space…”

With this exciting, vibrant, fresh discerning young company, we’ll be sure to.

To shop at VeloVixen and see their great range of stylish cycling clothes for women, click here.