Our half of the lecture theatre tends to be rather full, but as with most seating arrangements, most people have claimed ‘their’ spot. Mine is next to my friend and coursemate, Adam (not his real name).

Adam is the very incarnation of debonair, both in terms of sartorial elegance (creaseless tops, perfectly-pressed trousers every day) and general air of sophistication (just the right level of pricey aftershave and everything in his life ordered, from his Oyster card’s position in his wallet, to his sanctioned three hours each weekend at one of the Serpentine Galleries). Oh and he’s a nice person so I can’t even begrudge him any of these things.

Then there’s me. I turn up for a 9am lecture in some level of dishevelment having hurled myself through London on my bike. Assuming the temperature is anything above freezing, I’ll have a huge and obvious sweat patch on the back of my tattered t-shirt, the stench of which only serves to compound the misery of a morning lecture, my deodorant defenceless against this onslaught. Whilst I may by now be accustomed to this unpleasantness, my refined neighbour is definitely not. So, for his sake, and for the preservation of my own dignity, it’s necessary to in some way attenuate this uncomfortable reality.

British brand Velobici sent me their VB Ride T to see if it could solve this problem and alleviate Adam’s suffering. It costs £68 (though is on sale for £38 at the moment), comes in a wide range of sizes and two colour choices (ivory or light grey).

Both on the bike and off it, this t-shirt performs very well, thanks in large part to the fabric selection. Velobici have used a mix of micromodal fabric and elastane which brings a multitude of benefits. This means that the fabric has four-way stretch so it doesn’t inhibit movement on the bike in any way.

The fabric is also very soft to the touch and is therefore comfortable to ride in for prolonged periods as no chafing occurs. The Leicestershire-based designers have geared this specifically for summer use: the Jump T is breathable and I found it to be conducive to hot weather cycling even with a backpack.

As someone who was three months ago a smelly teenager and is now just smelly, any t-shirt that I wear for more than a day becomes some sort of health risk/chemical weapon and isn’t far off contravening the Geneva Convention.

So, when Velobici said their creation was odour resistant, I felt that I was equipped to highlight its shortcomings in this domain. However, I’ve only just today put it in the wash and before that wore it for an undisclosed number of days (I’ll give you a clue, it starts with ‘f’ and rhymes with ‘awe’). Whilst wearing it, I completed a plethora of activities such as cycling (obviously), competitive tennis matches (in the baking sun) and cooking some rather pungent food (curry for the family). Up until the end of the final day it was found to be successfully resistant to the myriad odours that were thrown its way. It can be worn in summer conditions without compunction about upsetting Adam or fear of breaching any convention, Geneva or otherwise. Chapeau Velobici.

What’s more, this multi-faceted fabric isn’t produced by some ecologically taxing process that directly contributes to the deaths of baby seals but instead is made from sustainable wood pulp.

Not only have the tailors at Velobici thought long and hard about the fabric but they have also done so for its cut. It has been cut slightly lower at the back so as to mitigate against the misery of cycling behind someone whose butt crack is far too visible (and by that I mean visible at all). They’ve gone for what Velobici describe as a classic, closer cut with a wider neck. This was found to fit quite closely around the chest and shoulders in a good, cycling-friendly manner (even if it does have a tendency to map itself to the contours of one’s pecs).

For the lower half of the torso, it draped like any standard t-shirt. The sleeves are slightly longer and tighter fitting than normal, which I am grateful for as it covers my rather stark tan lines from lycra-clad cycling adventures.There is a ‘VB’ embroidered on the right sleeve and a couple of (very obvious) cycling designs that can be chosen for the front. Unlike many other purported equivalents, this t-shirt doesn’t have any awkward laundry requirements and can be washed with the vast majority of your other items.

All in all Velobici have made a t-shirt that is a joy to commute in and is available in both white (“Ivory”) and light grey.

Comfy, breathable and well cut, what’s more, this t-shirt really is odour resistant. £68 is more expensive than the sum total of all my other t-shirts but this does do everything it says it will and with the frequent sales Velobici have, the current price tag of £38 should tempt those of us who tend to parsimony. Adam is grateful I have it; your equivalent will be too. 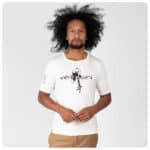