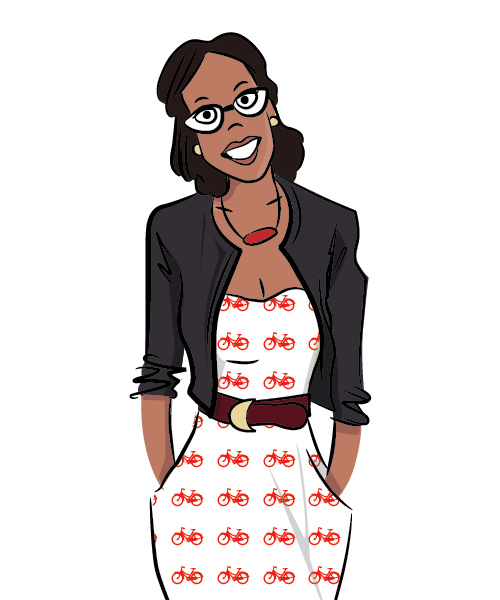 Inspiration, you can get it from everywhere, it’s all around in everything you see on a day to day basis. It’s quite marvellous how glancing at a sign or a picture or seeing a pattern can push you to create something new for yourself. When you meet someone or talk to someone who gives you that inspirational push that’s even better you get inspired and a push to drive yourself on. I’ve met a few/chatted to only a few people who have done that and one of is this awesome lady, Jools Walker.

At the time of this chat Jools was just ending her old job and starting a new one with the cycle wear company Vulpine, she also runs a blog called Velo-City-Girl. I’d spied Jool’s website as I was starting up my own and loved her writing and of course her eye for fashion for cycling (and beyond really Jools is as stylish as they come) really appealled to me and I liked her passion towards including cycling into your everyday life without the need for the traditional cycling get up or a bag with a costume change in.

Having recently met Jools at the Vulpine Fete in Manchester I can see her passion for cycling and fashion beyond her words and she’s just as inspirational in real live as in words and you know when someone looks like they’re photo, that!

Jools tells me about her fashion choices for cycling “I’ve always taken great pride in my appearance – fashion has always been my ‘thing’ and I wanted it to remain that way when I took up cycling again. One of the biggest influences when I’m getting ready for a ride is probably the weather,” any cyclist will relate to this, I’m sure! Jools continues “Just as if you were going out for a walk/shopping etc and  you check the forecast and plan around it (DC – I really need to start doing that) same for me getting out on the bike.

“The other influence would have to be wich bike I’m going out on; On the Pashley Princess, skirts are not an issue – however, if I’m on the Clubman for the day I’d probably not be wearing a skirt on the crossbar!”

Jools used to commute to her old work but Vulpine is a tad further away from where she lives now so she doesn’t get to commute as much as she would like, her own style for commuting is temperd by a few functional pieces integrating in with her regular style.  Jools explains “The same outfit I get on the bike with is the same one I’m in for the day. I wouldn’t say I have a specific outfit that is suitable for both situations, although I do have some rather nice Merino tops that are ace to cycle in and work very nicely with the rest of my wardrobe…”

I’m a great believer of Jools idea here, merino and funcitonal cycling jackets seemed to have been best adapted to fit in with the urban style and are easily mixed with other clothes to really give you a fashionable look, pioneer there Miss Walker.

Myself and Jools chatted about the limited options available a situation Vulpine themselves are looking to address with a new range of merino tops for the ladies coming out in April to augment the start up options presented last year. Jools is a fan and was a fan even before she was put on the payroll “I have noticed this (lack of stylish cycling clothing available to women) but there are clothing companies out there who are taking this on and doing something about it. First example that springs to mind – Vulpine. They launched a range of women’s merino jersey’s mid last year. They look and feel fantastic are are great to cycle in… High-end cycling clothing for women that performs well and is also fashionable needs to be out there for us!”

As I say we had this chat in October/November 2012 as Jools was just swapping jobs but she speaks the truth – Vulpine’s merino is some of the best out there but there are others now offering great choice for women, notably Howies who whilst not totally bike specific thier clothing offers fantastic quality, build and style plus others such as Union 34 and Urban Legend.

It’s great to see more stuff for women become available, Jools believes there’s a lot more that can be done and tells us there’ll be more to come from Vulpine on the matter. “It can be very frustrating… I found this with the Levi’s Commuter range when that was launched, and it was all Male clothing only. I refuse to believe that the Female Cycling market isn’t big enough for brands to recognise that it would be fantastic to have specific Women’s ranges too. When it comes to Nick Hussey and Vulpine, I have a good feeling about the women’s range expanding overtime… watch this space.”

Speaking more about Vulpine Jools explains a little more about how the the opportunity came about, but first a big congratulations (albeit very delayed) “Thank you!” Jools says, “I’m in the role of Sales & Marketing Manager for Vulpine. This is a REALLY exciting role for me, as it’s a combination of two of my biggest passions, and I’ll be working alongside someone who I have a lot of respect and admiration for. I met Nick via twitter. As he puts it (and it’s the truth) “we got to be friends over a shared love of style, dogs and taking the piss nicely”. I’ve done a spot of modeling for Vulpine which is always a blast to do!” 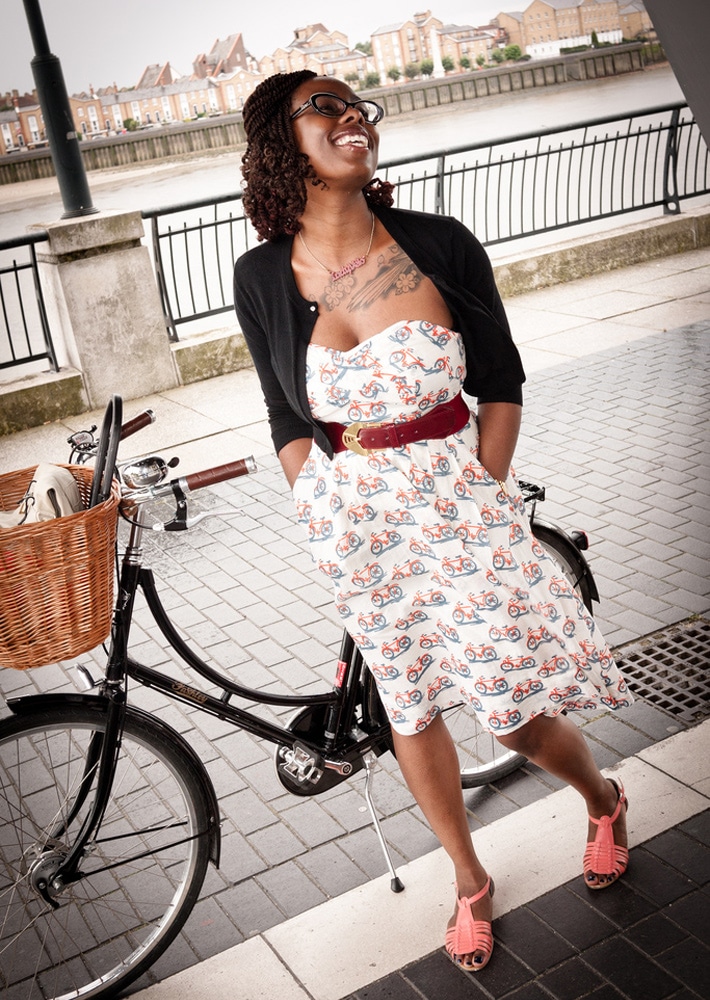 After being at Vulpine just over 4 months Jools has already seen plenty of action being part of two fete’s throwing cabbages at the recent Morvelo City Cross, having lots of walks Lily and helped be part of Matrix Racing Academy Team Launch. Plus more modelling of the previews of the new women’s merino range. Seems like it’s all going very well for her.

Stepping back we spoke more about how Velo City Girl and her love for cycling started.

“I used to love cycling when I was a kid… my first bike was actually my older sisters BMX Raleigh Burner which our big brother lovingly restored for me! He taught me how to ride on that, and it became addictive… but then as I got older, I stopped. It was a mixture of reasons – not feeling that safe / confident on the roads (when you’re a kid, you feel untouchable) and falling into the routine of getting the Bus / Train etc to get to College and then Uni. I missed it & at 28 decided that I wanted to be back on a bike again as that freedom was lacking from my life. I knew that I wanted a Pashley Princess (I’d been lusting after one for some time)… and the rest is what you know of me today.”

Jools passion was soon spied by others (it was always going to be) and this lead to several flirtations with the camera most notably on ITV4’s The Cycle Show and an interview on the BBC a piece I was very impressed with, Jools spoke with confidence and conviction and really came across as someone who believes in the positives of cycling, it was really refreshing and uplifting, and all this started from her site – build it and they will come etc, etc.

“Presenting on The Cycle Show and other subsequent media work all came from my blog. It was one of the last things that I ever expected to happen when I started VCG two years ago, so it took me by surprise when it all started to happen! Cycling is such a wonderful thing and my blog is my soapbox if you like, to shout about it and get the message across. It was extremely flattering for The Cycle Show to pick up on this & ask me to be a part of what they were doing. There are so many different types of cyclist out there – and being a leisure cyclist who likes a lot of fashion in the mix, it was wonderful to be part of a magazine show that focused on the many aspects of cycling.”

I’m sure we’re all glad to hear that. Jool’s blog has earned it’s place as a great source of news, reviews and valued opinion within the cycling community as well as serving a good dose of that inspiration I mentioned at the start. It’s a genuine pleasure chatting to Jools, a beaming smile and a thoughtful nature she’s always willing to chew the fat and have a good chat and I gurantee you’ll leave with a smile of your own and your head full of ideas how to chase your own ventures. I’m sure the future holds great things for this cycling style icon. Inspirational.

You can visit Jool’s own blog Velo-City-Girl here and visit Vulpine here.