If you Google the most painful things a human can experience, some of the common answers are kidney stones, childbirth and severe burns.

Despite having fortunately never experienced these, I can actually confirm, almost objectively, that the most painful experience known to humankind is when your foot slips off the pedal followed by smacking your shin against said pedal.

Few childhood experiences have left such an impression, physical or emotional, as that fateful 2008 morning just outside Brussels when this tragedy first befell me. As such, ever since then I have tried to mitigate against history repeating itself. While cycling shin pads might cure this, prevention is generally the better option.

One of the most significant preventive factors is having a good pair of shoes that maximise one’s chances of foot retention. While the cycling world contains a plethora of systems that promise to keep your foot attached to your pedal in ever-increasing complexity, these aren’t really suitable to wear off the bike. In a world where we can fling men to the moon and map the neural networks of the human brain, we cyclists really shouldn’t have to choose between the structural integrity of our tibias and off-the-bike practicality.

This is a problem Vaude seek to address with their snappily titled ‘TVL Asfalt DUALFLEX’ footwear. They describe it as “The sneaker for cycling: Walking comfort and pedal performance perfectly combined”. It weighs in at £170 and comes in a variety of (European) sizes.

Upon taking it out of the box they look like a fairly common pair of reasonably smart casual shoes or trainers. The upper shoe is made of nubuck leather and the sole is special light brown-coloured rubber material. Putting them on, they fitted comfortably and felt snug in the right way; no doubt this is aided by the special anatomically-designed insoles.

In many ways the biggest weapon in this shoe’s arsenal is the eponymous Dualflex feature in the sole. On the bike this means that the sole has greater stiffness for the downward pressure, i.e. it’s stiff when you pedal so you don’t lose as much power and also have a more stable, comfortable connection with the pedal. Off the bike it means that the sole has much more flex when subjected to certain types of upward pressure, i.e. when walking you don’t feel like you have paving slabs for soles.

Whilst my inner engineer is screaming at all the scientific dodginess in this explanation, the reality is that the Dualflex does seem to do what it sets out to do. The shoes were very conducive to cycling around city streets. They felt secure on the pedals at all times (key in shin protection) and the stiffness in the sole did make me feel I was losing less power each pedal stroke (and believe me I need all the power I can get).

When walking, I didn’t really notice anything different to my usual bog standard trainers (which is a good thing in this case) as my foot roll and haptic feedback felt just the same. In short Dualflex is a very clever and useful piece of engineering which means Vaude nail the balance between comfort and power.

Vaude have crammed even more nifty design into their soles. There is a special Swiss-made outer sole material which makes the shoes very grippy on the pedals which my shins are thankful for and what’s more it’s made from 30% recycled material. Mercifully these shoes aren’t at all squeaky which is one of my pet peeves.

So, to summarise regarding the sole: some very clever engineering ensures it functions well on and off the bike. Walking comfort, check. Pedal performance, check.

The upper shoe is also laden with features. Vaude have made it out of nubuck leather which has been specially treated to make it hydrophobic. This leather is also Terracare which means its responsibly and sustainably sourced. When tested in the Manchester rain and cycling through muddy puddles my feet were kept dry and the mud and grime wiped off easily. 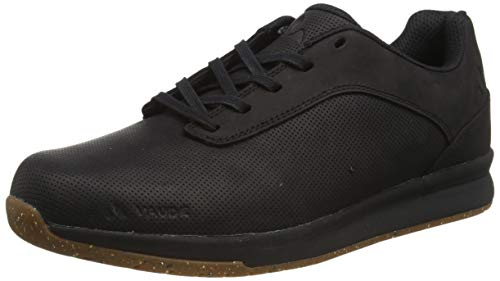 Not content with just the sole and upper being recycled, the very comfortable polyester lining is also 30% recycled material meaning the whole shoe does not impinge on one’s ecological conscience. The whole shoe feels very good quality, which I guess is to be expected from £170 shoes, and have a clean, understated look. That does mean that these shoes are really quite expensive but they do feel as if they would last.

These shoes do what they say on the tin. Comfortable for walking and conducive to cycling. For someone who is looking to spend this amount of money on shoes to commute in and then carry on wearing, these would be a really good option. They go a long way in shin damage prevention. I’m sure many of my commutes in the next year will be done in these. As long as you have the cash I’d advise you to do the same. If only alleviation from kidney stones, painful childbirth and severe burns was as simple.

Rohan Joseph
Rohan is Discerning Cyclist's chief reviewer. Most of his exploits on a bike involve hurtling across London's streets to either his lectures or church. He also enjoys labouring up inclines in an attempt to feel athletic and has recently joined the minimalists in riding a fixie (of his own creation). As a firm believer that a small exertion justifies a large meal, he passionately extols the virtues of a post-ride pizza to anyone who will listen.
Latest posts by Rohan Joseph (see all)