Let’s address the elephant in the room…

This website is called Discerning Cyclist. So why on earth am I writing a review about an electric scooter?

They might both have two wheels – but no-one confuses a scooter with a bicycle do they?

And that is absolutely true. But when I started this website in 2012, I don’t think I’d even heard of an e-scooter. I just wanted an efficient way to get to work that wasn’t in a metal box.

Maybe if I’d started this website in 2022, I’d have called it Discerning Commuter instead.

But how does an electric scooter stack up as a commuter tool? And, specifically, how does the powerhouse Varla Eagle One Dual Motor Electric Scooter fare?

One thing I should make quite clear is that the Varla Eagle One is no dainty little scooter. This is a hefty piece of kit. If I was to compare it to a bicycle, it would undoubtedly be an electric fat bike.

Indeed, when I received the packet, I was astonished to find I could barely lift it. And it wasn’t just because I’m a weakling. It’s because this electric scooter weighs a whopping 35kg (77lb), which is astonishingly a little more than my Himiway Cruiser electric fat bike (72lb).

But this scooter is heavy by design.

Indeed, the comparison with an electric fat bike is quite apt, as this is essentially a fat scooter.

Okay, so what do I mean by “fat scooter”? It’s not intended as an insult for being overweight. It’s because it’s sturdy,  durable and powerful. It can handle itself.

Now, before I reveal what this scooter is actually capable of, I need a disclaimer: e-scooters have a speed limit of 25km/h in Europe and the UK, and between 20mph and 30mph in the USA (depending on the state). All e-scooters (like e-bikes) are therefore shipped (by law) with a speed limiter in place that keeps them within these laws.

However – and this is certainly not a recommendation – removing these speed limits is not difficult at all and can be found easily online.

And if one where to do that with the Varla Eagle One, they would discover that this scooter can reach speeds of over 40mph (60km/h).

I could scarcely believe this claim. So, purely for the purposes of this review, I decided to put this to the test and private land. And I can confirm that the Varla One can reach these speeds with ease. This thing has scary power.

It turns out a lot of the weight of this scooter is because this e-scooter has not one, but two 1000w motors – which is frankly an insane amount of power.

So with all this speed and weight, surely the Varla One falls done when it comes down to its range.

Well, actually no. It doesn’t. The Varla One can reach up to 64km (40 miles) on a single charge. Admittedly, though this won’t be happening when you’re going uphill at over 60km/h. To get the full range, you’ll need to use the single motor mode (which can be selected simply by pressing “single” mode from the buttons on the handlebars, and “eco” mode rather than “turbo”. With these settings (and the standard speed limiter in place), you’ll reach speeds of up to 20km/h, but you should be able to reach close to 60km in range as long as your route isn’t too hilly.

If you’re tearing round illegally at top speed, you’ll be lucky to get 40km.

The other thing that makes the comparison to a fat bike suitable is the terrain that this scooter can handle. Most electric scooters are built to ride on flat roads. But the Varla One has chunky 10” pneumatic tyres plus front and rear suspension.

Obviously, though, this is still a scooter, so don’t expect to be able to ride through deep sand or go mountain exploring. But for rough gravel paths, or even extremely vicious speed bumps, this scooter can handle it with each.

You accelerate on the Varla by pulling a trigger on the right-hand side, which also shows your speed and battery life on a screen above it. You brake like you would on a bike.

Another area in which the Varla certainly does impress is taking on hills. I’ve seen many people with less powerful electric scooters have to get off and walk up any hill greater than 10 degrees. This scooter, however, can go up hills of 30 degrees. Indeed, even in my hilly locale, I couldn’t find any hills it couldn’t get up.

Oh, this scooter can also fold in half. Which is great for putting it in the boot of a car or storing it somewhere. But given its weight, it’s not really viable to carry this thing around.

All-in-all, it was a fun experience to switch from a bike to a scooter.

Indeed, I’d never actually ridden an electric scooter before the Varla One, but I was very impressed with it.

But adjusting to riding a scooter is very easy and within just a few minutes I felt comfortable riding a new type of vehicle.

I’d say the Varla One is an excellent vehicle for anyone who has to deal with some mixed terrain (e.g. bumpy roads) compared to most other scooters, but it might be overkill for short city journeys (in which case Varla also provide a more lightweight commuter scooter).

The Varla One also has a hefty price tag of €/$1699. But this is a premium e-scooter and I think the price is fair considering the power and durability it offers. 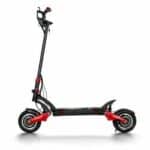