When Will the VanMoof S4 Be Released? [RUMOURS + LEAKS]

Will the VanMoof S4 make an appearance in 2022? VanMoof have been hinting at a successor to the VanMoof S3 for some time.

Fans of the brand were ecstatic to see VanMoof’s socials light up with a range of new teaser videos. The brand’s “biggest-ever” reveal has been announced for April 5th 2022, at 5PM BST.

So when will the VanMoof S4 be released, and what do we know so far about this long-awaited addition to the range?

Although a release date hasn’t been confirmed, VanMoof socials direct followers to a save the date page, inviting them to sign up for more information. The online reveal is set for April 5th, 2022.

VanMoof haven’t actually confirmed this big reveal is in relation to the S4, however. Back in Autumn 2021, fans were speculating wildly about a similar set of teaser image (and whether these were of the S4). It transpired these were images of the VanMoof V, due for release in 2022.

The company have managed to keep things under wraps admirably well. Purported ‘leaks’ have popped up (particularly in fan forums and Reddit), but there’s not much to substantiate them.

However, the release of the VanMoof S4 this year seems likely. The S3 is two years old now, and bar a small update in 2021, is pretty similar to when it rolled off the production line in April 2020. In short, it’s due a successor.

In addition, three of VanMoof’s competitors have released new models. These include Cowboy, Veloretti, and Ampler, upping the ante in the market for high-spec, stylish, smart bikes.

Most of the VanMoof S4 rumours are based on the teaser videos and images released. As we’ve said, VanMoof are keeping a tight lid on things!

So what can we tell from the images? For one, the new range seems to be based on a more neutral colour palette. The bikes pictured look to be white or dark grey/black.

It looks like VanMoof will still be using a hub motor, housed on the front wheel. Similarly, it looks like little has changed with the braking or gear shift system.

One option is that the gear shift will still be electronically controlled, like the S3. However, close inspection of the below video shows what looks like a new housing on the bottom bracket – a bottom bracket gearbox, perhaps?

There’s also a shot of the bicycle near the end, in which you can see that the chain (or rumoured belt drive) is set up so top and bottom run parallel to each other.

On the video released on VanMoof’s Instagram, you can make out a light-up element on the right handlebar grip with controls next to it. This could be the rumoured ‘panic proof’ next generation e-shifter. There’s also what looks like a button below the handlebars.

This could back up rumours of the new range featuring a built-in camera, external bluetooth-compatible speaker, matrix-display, and phone-docking station – possibly with wireless charging capabilities.

Some of the most recent images clearly show perforated brake discs. Other manufacturers are offering ABS brakes for bikes – are VanMoof following suit?

The updated lighting looks particularly striking, with a fine strip of light running around the outer edge of both the front and rear lights, and on the side. These could function as daytime running lights, with a front high-beam installed for night-time riding.

Expect the VanMoof S4 to cost upwards of £2000. Currently, the VanMoof S3 and VanMoof X3 are retailing for £2148, while the price of the upcoming VanMoof V is expected to be £2998.

Check back here for updates as we get closer to the April 5th reveal! 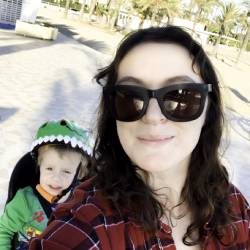 Donata Caira
Donata has a background in content creation and digital marketing. Based in North East Scotland, she has some incredibly scenic cycle routes on her doorstep (weather permitting). She's usually cycling with two kids, the dog, and her camera in tow, loves mountain bikes, and has a soft spot for town bikes - the more colourful the better!

Donata has a background in content creation and digital marketing. Based in North East Scotland, she has some incredibly scenic cycle routes on her doorstep (weather permitting). She's usually cycling with two kids, the dog, and her camera in tow, loves mountain bikes, and has a soft spot for town bikes - the more colourful the better!