I remember when I was excited to become an adult and live independently.

The hope of doing whatever, going wherever and eating however many tubs of ice cream I deemed fit was something I looked forward to greatly.

This myth was soon dispelled. I quickly learnt that doing whatever did not actually mean true freedom but instead merely meant the choice of what chore I would have to do first.

Rather than going on lots of cool trips, the freedom to go wherever actually meant cycling almost inter-continental distances in the driving rain to save 80p on a bus fare.

Perhaps most surprising, though, was the realisation that, after eating an extravagant and potentially dangerous quantity of mint-choc-chip, my adult metabolism coupled with my desire to not become a sphere meant that even then, my ice cream intake had to be limited.

There is however, one aspect of adult life that trumps all these realities in the pantheon of disappointment.

I am of course referring to the soul-crushing burden that is the laundry.

In a world where we can understand the inner-workings of celestial thermo-acoustics, child-language acquisition and penal substitution it’s almost farcical we don’t yet know how a collection of inanimate objects can conspire so effectively to cause maximum chaos.

Why do all the boxers run out just when you are in a rush, all the t-shirts desert you so you have to wear ‘that’ t-shirt when meeting someone new or rogue socks decide to make themselves mysteriously disappear?

This is a problem only compounded by cycling.

Most days when I commute by bike, I must change shirts. In summer, the heat worsens this to three shirts a day to avoid the chemical weapon that is my sweat-soaked top. And obviously this means facing the dragon (laundry) more often.

Although I like cycling more than most, the ever-present spectre of laundry is enough to kill the enjoyment of any ride.

Enter Unbound Merino. They sent us their Long Sleeve Crew to try out and see if it could solve this problem. It costs £66/$85, comes in black or navy and a variety of sizes.

While this looks like a regular long sleeve crew, it is anything but. The reason for this is the eponymous Merino wool that makes up 100% of this crew.

“What is Merino wool?” I hear you cry.

I am glad you asked.

It is a wool from a specific type of sheep, the Merino or, to give them their Latin name: Ovis Aries, initially bred in southern Europe.

They are now almost ubiquitous having been raised all over the world whether that be in the Austrian Alps or the Australian Outback. The humble merino sheep is at home in a very wide range of weathers.

The fibres are far thinner than normal wool and have a fancy, natural coating on. I could talk for far longer about what Merino wool is, but it’s probably simpler to explain what it, and consequently the top, does.

Upon wearing the top, the first thing I noticed was that it feels super soft and smooth.

There is also slight stretchiness which makes it a very comfortable wear. This is due to the fineness of the merino wool fibres. The lightweight feel also means that this comfort and softness transfers to the bike, none of this chafing or roughness that can come with other tops while cycling. While this felt good, I could feel the rising dread of potentially having the shirt, and even more worryingly a wool shirt, further add to the laundry.

Unbound Merino have made some big claims about this top.

They say you can wear it for weeks without needing to wash it.

As someone who upon the mere thought of exercise sweats like a pig, I felt equipped to test the validity of said claim and as someone who despises laundry I hoped it would be true.

The first thing I noticed about cycling in this was its breathability. It felt very much like I was wearing a specifically made sports top and not at all as hot as normal long sleeve tops. This went a long way in reducing the raw volume of sweat.

No top, however, will eliminate perspiration completely.

The real test comes with how it feels when you do sweat, for instance old-school PE bibs don’t make you sweat but they soak it up like a sponge on their way to contravening some health and safety standards.

Merino wool is extremely good at moisture wicking and gets liquid off your body and evaporated very quickly. This stopped me from feeling too hot and stuffy. In case you needed to know (and let’s face it why wouldn’t you), coke and tea also dry off the fabric quickly.

During riding it makes you feel very comfortable; what about after you get off the bike? Because of what is, to my mind, Merino Wool’s greatest feature, it’s not like the shirt pongs because of all the sweat it has been in contact with.

Each fibre of the Merino is by nature, odour resistant and antibacterial. They have a natural coating (or residues of it) called Lanolin which as well as being hydrophobic (water repelling) also guards against odour-producing bacteria.

The result? After more than 15 days of near continuous use, I still have friends, nobody has gone out of their way to avoid me and the shirt doesn’t smell of, well, my usual shirt at the end of one day. All I needed to do to achieve this was hang up the top at the end of the day.

I am genuinely astounded that somebody could make a top that would be immune to over 2 weeks of me and part of me is wanting to change my whole wardrobe to being garments made of this wonder wool.

You might be worried that when it does come to having to launder this top (not that this will happen very often) that it will require some complicated ritual akin in complexity to offering a sacrifice to some pagan Merino gods. Mercifully, it goes in any normal wash; just don’t tumble dry. That being said, if I had many more items of Merino clothing it wouldn’t be too hard to entirely dispose of a washing machine altogether.

This is usually the point in a review when I write about some small quibble with the product. With this top however, it functions exactly as it should, lives up to the claims it makes and looks good. If the price were a bit lower I might only wear unbound Merino.

Unbound Merino have made an exceptional top, which drastically reduces the need to do laundry and helps bring back some of the joy of adulthood. I ever live in hope that they turn their hand to mint choc chip ice cream next. 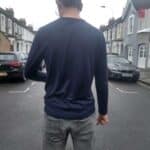