One of the best things about my summer job a couple of years ago was the 40-mile cycle back home on a Friday.

It was a beautiful way to switch off from the rigours of rather mundane work week and I got to enjoy cycling through the Lancastrian countryside to usher in the weekend.

Part of the charm was the fact that in places everything felt so pristine, so unspoilt that it felt like the only people who had ever been there was the farmer who’d marked out the country track.

Then there were other bits which were a far cry from that.

At last count, my route home took me past no fewer than 15 clothes recycling bins, 5 cash for a bag of clothes shops and 3 landfill sites.

Initially I cycled past with an air of superiority given that cycling is so eco-friendly (which it is) it was only more recently that I’ve realised that the clothes I was cycling in were so dangerous to the environment I loved enjoying by bike.

The amount of water to make even a regular t-shirt was so great (circa 3000 litres) that it honestly felt akin to killing a baby seal and wearing its hide as a top instead.

On a more objective note, the clothing industry contributes to 10% of carbon emissions and over 85% of textiles end up in landfill. So, for a cyclist who was quite happy that I was being so virtuous in fulfilling my responsibility towards the planer, I now needed clothes to match

Enter Threads of Adventure – a company making sustainable cycling t-shirts – who sent us a couple of their t-shirts so we could put them through their paces. They cost about £18 and come in a variety of sizes

The first thing I noticed when taking them out of the box was how soft they were. One of the USPs of threads of adventure is their organic cotton. This means that they are very soft to touch and therefore comfortable to wear off the bike.

While this may not have the same functional ability on the bike as some of the synthetic alternatives, this t-shirt was still reasonably comfortable to cycle in. Part of this was on account of the aforementioned fabric but also the tubular design and cut. After a couple of hours of very frantic ‘delivery riding’ (dropping off parcels all over London) I was still comfortable and nothing began chafing or feeling too hot.

The thing that sets these apart from the crowd is that these t-shirts are made with a conscience. Whether that be the actual fabric itself which is organically sourced cotton or the fact that all the t-shirts are handprinted with water based ink, threads of adventure are committed to keeping things eco-friendly.

As such they are GOTS (the global standard) and PETA vegan certified so not only will you be looking after the planet in riding your bike, but also in the clothes you wear while you are doing so.

As well as the product itself these tops are made according to the standards of the fair wear foundation so you know it was made by someone who is being treated fairly to make it, not something that can be said for many other cycling t-shirts.

In terms of looks, there is a large variety of designs but the couple Ceri (more on him later) sent over received compliments from people far more sartorially astute than myself. This looks like a normal stylish t-shirt and definitely avoids the lycra-reminiscent looks of some other t-shirts. The ultimate aesthetics test for any urban cycling clothes is whether you would choose to wear it if not on your bike. This is a test that these tops have passed many times.

Threads of Adventure is the brainchild of Ceri Middleton who came up with the idea for this on a solo-bike ride across Europe.

He wanted to combine functionality for adventure while being kind to the environment he was exploring and it really does show.

Whether it is their super soft comfortable fabric that is very conducive to long stretches in the saddle or the fact that they aren’t taxing the planet, Ceri definitely seems to have achieved his aim and the tops feel really good quality.

So, especially with Christmas coming, why not get a top (or three) for the discerning cyclist in your life in order that may not only be discerning in regard to sartorial and functional standards but also environmentally friendly ones too.

EXCLUSIVE: Use discount code “DISCERNINGCYCLIST” for 15% off at Threads of Adventure until 31st December 2020. 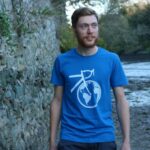