While this of course will hopefully remain hypothetical for all of us, I think this philosophy applies to locking your bike. Let me explain what I mean by this…

The sad truth is that if a bike thief wants to steal your bike, they will almost certainly be able to. The only thing we can do is to make stealing our particular bike a less attractive prospect than stealing other bikes nearby.

How to Deter Bike Thieves

There are two broad ways in which this can be done:

Anyway that brings us to Tex-Lock, who sent us their signature eyelet with both their U and X lock to try out (more on the difference later). They describe it as ‘the award-winning, recommended, certified textile based bike lock’ and is available from Osloh from $139 or $149 depending on the lock.

Each lock has two elements: the cable and the actual lock.

This cable is the flagship element of this locking system. The designers have aimed at making a secure lock that also looks good, and I think it’s fair to say they’ve succeeded. While earlier versions of the Tex-Lock may not have exactly been synonymous with top notch security, this version has several improvements.

At its core is a hardened metal centre which is the key defence for saw resistance (especially pertinent as an angle grinder is often the criminal’s tool of choice). Over that, there are myriad layers of specially engineered fibres. These protect against high force implements such as bolt cutters. As burn marks on many bike racks round London will testify, sometimes thieves use blowtorches or something equivalent to melt whatever you fasten your bike with. Not only does the textile cover look good but it is also flame resistant beyond 1000 degrees Celsius. Effective then against the triple threat of saws, cutters and fire. This has a Sold Secure Silver rating which is about as good as anything non-rigid can be.

I am not at all precious about scratches on my bike’s frame (I did – after all – pull it out of a skip) but if you are, then the textile sheath means that you can lock up your pride and joy with gay abandon and it won’t leave a mark. This also makes it quite comfy to wear on short rides if you wanted to indulge your inner bike messenger.

In short, the cable is stylish, secure and soft (yes, this third one is contrived but I’m a sucker for sibilance).

We then move onto the rigid lock itself. Both the U-lock and the X-lock have the same locking mechanism; the difference is the shackle length. Consequently both have double sided locking which means that the determined bike thief has to (generally) make two cuts instead of one.

The U-lock is the smaller of the two and primarily serves to secure the ends of the cable as it’s not long enough to attach to any part of the bike itself. If you use your lock for securing your bike for short periods of time, this is probably the one to go for as it’s quite convenient. It’s Sold Secure Silver rated which means (like the cable) it’s a good compromise between security and convenience.

If you attach the longer shackle, you get the X-lock. Coming in at 640g this is the lightest Sold Secure Gold bike lock available (at least that I could find) and the rating tells us this is about as secure as you can get for a bike lock.

How to Use Tex-Lock Eyelet Lock

What then happens when you bring cable and lock together?

This is where a few problems begin to appear. Generally, my locking method involves the frame and back wheel being secured to the rack, with a D-lock and a cable going through the front wheel. This means that it is very hard for the thief to take the frame (to my mind the most valuable component).

Unfortunately, this proves a bit more difficult with the Tex-lock. Even with the bigger X-lock, I wasn’t able to secure the frame to the rack given its smaller size. I was – however – able to secure everything I wanted to (as shown in the photo). The downside was that my frame was only secured by silver level protection.

With the U-lock you are only able to secure one wheel and the frame to the rack (as shown) which I would be happy doing only very briefly.

So while the whole Tex-lock system may not have worked as expected for me, I have found that pairing the big cable with my existing chunky D-lock works a treat. When configured in this way, 99% of other bikes are going to be a more attractive prospect to that pesky bike thief.

In conclusion, all the various elements of the Tex-Lock system are wonderful. However, they don’t quite all come together to make the complete package, but will work well with any of your existing locks.

If you already have a solid D-Lock and what added protection for your frame and wheels, the Tex-Lock will complement it wonderfully. However, if you need a very high level of bike security (i.e. protection from serious power tools) the small size of the both the X-Lock and U-Lock prevent them from being directly locked to your bike frame and the bike rack – limiting it to Silver-level security.

Aside from this frustration, though, the Tex-Lock is a wonderfully innovative bike lock. You can use it to secure both wheels at once, it’s easy to carry, it’s heat-resistant and, heck, it even looks good!

At $139 (U-Lock) / $149 (X-Lock), it’s not cheap and unless you’re happy pairing it with another bigger U-lock that you can attach to your frame and a mount, it might not be the one for you if you live in a risk area. 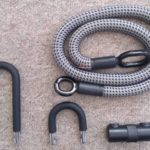