Not so long ago, I took a look at Rehook, a new bike tool (that was even successfully backed on Dragon’s Den) that simply helps you “rehook” your bike chain back on when it comes off, without the greasy finger mess.

And now, Wayne Taylor, the Rehook inventor, is back with a new lightweight multi-tool based that still incorporates the original Rehook concept. Fittingly, it’s called the Rehook PLUS.

What Tools Does Rehook PLUS Have?

Despite weighing in at just 60 grams (about the same as a regular Mars bar), Wayne has managed to squeeze in an impressive 11 bike tools onto the Rehook PLUS.

Indeed, the Rehook Plus contains:

As well as being remarkably light, the Rehook PLUS is also small and slim, with dimensions of 14.8cm x 2.8 cm x 1.4cm (which is slightly longer, but thinner and narrower, than a Mars bar).

It also features an elastic strap so that you can easily attach it to a bike frame. Although I wouldn’t leave it attached to your bike when you park in public as this could be as easy target for sticky fingers.

However, if you do choose to attach it to your frame, make sure you have the blue tyre lever facing the frame, so that it doesn’t come apart and potentially fall off if you hit bumpy terrain

What Can Rehook PLUS Do?

If you’re anything like me (i.e. an absolute peasant at bicycle maintenance and repairs), you may be looking at that list of tools and thinking “riiight…”

So, in laymans terms, this is was the Rehook PLUS can actually help you do:

It is an impressive CV.

The 11-in-1 Rehook PLUS Cycling Tool: Summary

I can’t speak on behalf of a bike mechanic, but as someone who’s only ever going to conduct spontaneous bike maintenance and repairs on a “needs-must” basis, this tool has everything I’m ever going to need.

The Rehook PLUS is also really neat. It fits together like an easy jigsaw puzzle. Everything has its place, there’s no space wasted, and it’s a very satisfying little object.

It goes without saying that the Rehook PLUS (£26.99) costs more than the Rehook original (£12.99), but it’s still a very fairly priced tool for something that is both potentially valuable and discreet.

I take the Rehook PLUS on every ride I go on now (although I keep it in my bag rather on the frame) and it gives me peace of mind knowing that I shouldn’t get oily fingers the next time I need perform a quick fix mid-commute.

The Rehook PLUS is simple. And it’s simply ideal when you’re on the road. 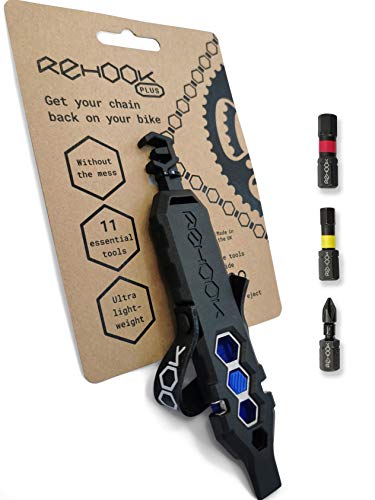 Rehook PLUS
Check Price
Pete Reynolds
Pete is the co-founder and editor of Discerning Cyclist. He commutes by bike daily from his home to his co-working space. Originally from Wirral, UK, Pete now lives in Spain. When visiting a new city, Pete loves nothing more than to explore it on two wheels.