When I left home, my parents’ biggest worry wasn’t that I would be unprepared to leave. Nor was it that I’d be irresponsible with my freedom and turn to many of the vices this world has on offer. Despite the current climate, it wasn’t even anxiety about the whole pandemic situation that they lost most sleep over.

It was instead the menacing prospect of me cycling on London roads.

As a result they aren’t happy with my level of conspicuousness unless my riding setup makes it look like the north star had decided to go for a ride.

Despite having a front light that seemingly outshines the sun and a jacket that is in danger of over-exposing Google maps, my parents still would like me to be more visible.

NOTE: This page contains affiliate links, meaning I may receive commissions for purchases made through those links, at no cost to you. This helps to keep the wheels of Discerning Cyclist turning.

They were therefore suitably impressed when I told them Aussie company Knog sent me their Blinder Road R70 which they describe as “the rear bike light for the discerning rider”. It should be right up our street then. It retails for around £51.99 at Knog.com and is considered the best rear light in their Blinder Range.

Upon taking it out of the box the first thing I noticed was the sleek design.

This does not feel like many other bike lights which generally divide into two categories. Half of them are so clunky and heavy that you feel like you may as well strap a wood burner to your seat post; whereas this looks refined and only weighs 47g (just under the weight of three chocolate digestives).

This does not mean that it’s feeble and flimsy like the other half because it feels solid, of high quality and, more importantly, went on to prove its durability in several hours of blustery British weather.

One day I know I will have reached maturity because I’ll turn on a new light while pointing it away from my face rather than gazing directly into the exact aperture from which the many lumens are immediately emitted. I haven’t yet reached this milestone and as such the second thing I noticed after taking it out of the box was how piercing the beam was.

Knog spent six months designing this and the fruit of that effort is eminently visible.

It isn’t the raw power that is so dazzling but what they do with the 70 lumens that is most impressive.

The lenses are – to give them their technical name – collimated optics. This means that each of the light rays comes out of lens parallel to the others. The result is that this throws out light a lot further down the road than most other bike lights. In all my riding with this in London there hasn’t actually been a road that is long, straight and uncongested enough to exceed this range.

The maximum distance I can personally verify this light to be effective is about 500m but as I said, this is due to the limitations of London roads. What I’m trying to say is that this light makes you very visible, as you can see from the two clips I recorded below:

The Importance of Bike Lights

Lots of bike accidents are the result of side impacts so in those instances a light that can throw the light of a collapsed sun miles down the road may not be very efficacious.

Thankfully Knog have made some provisions to help increase side visibility. There is a band of transparent plastic round the side which means that the LEDs do throw some light sideways even if it’s hardly celestial in its proportion of emittance.

There are a number of modes, from fully on to a variety of flashing modes that conserve the battery life by different amounts.

Depending on the time of day which I travelled, I either used eco flash which is the longest lasting mode and is advertised as lasting for 20 hours (I got 17, so close enough) or the bedazzling fast flash which lasts the 4 hours it is advertised to do so.

Charging happens either via the integrated USB stub on the light or the charging cable that comes with the unit. This will be fully charged in about 3 hours.

It is also important to note that because of some clever technology, the light runs at a consistent brightness for its whole battery life – none of this dropping off towards to the end.

There are few things more smartingly painful than trying to fiddle with a stubborn bike light strap in the driving rain and cold. Knog have managed to avoid exposing you to that discomfort by adding a plastic clip/handle to make fastening it onto your bike a real breeze.

And, for those of you who are all about the marginal gains on your ride, it even fits to an aero seat post.

All in all, this a great light.

Clever engineering and great visibility make up for the slight deficiencies in battery life. This is however reasonably pricey, with the Knog R70 coming in at around the 50 bucks mark (although it can be a bit cheaper on Amazon and you can also check out the Knog Blinder X for a slightly cheaper alternative).

If you do have the money though, there aren’t many bike lights that work this well and alleviate your loved ones’ worries about you on the road, which is obviously priceless. 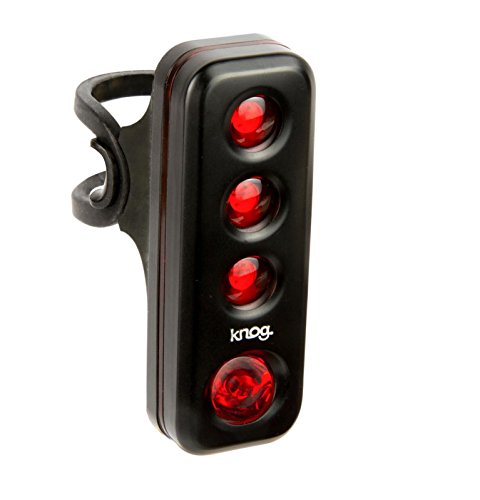