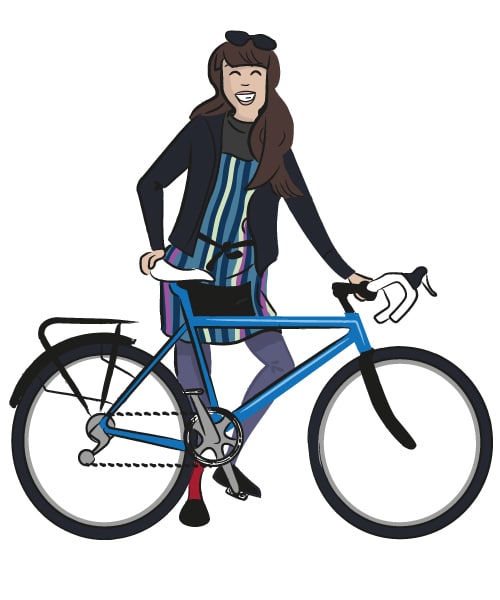 A Californian in London opens a DIY bicycle maintenance workshop where you work on the bike, learning its particular nuances and how to properly maintain it, stripping it down and building it back up again.

This Californian would be Jenni Gwiazdowski who traded the sunnier shores of America due to her boyfriend at the time; things didn’t work out but she so enjoyed the culture of her new surroundings she decided to stay.

Jenni had always been interested in cycling and it came about that she fancied a new challenge. “It all started a year, year and a half ago in January 2011,” she starts, “I had made it my new years resolution to learn how to build a bike. I had a vintage Claud Butler frame but I didn’t know how I was going to do it, what tools I was going to use etc. I was quite naive with it all.”

After searching for classes in South London she eventually asked her friends for help, “My flatmate suggested I search for the Bike Kitchen. I found several around the world but none were near me. Being from a teaching background, I decided to set one up.”

Being naive about the subject actually turned into a bit of an advantage for Jenni as she didn’t get bogged down or bothered by any pitfuls that may or may not be around setting up a workshop like Bike Kitchen. So she went for it and now, a year and a bit later, she’s left her job and is working on the London Bike Kitchen full time.

Backed by her own personal savings, a grant from the London Cycling Campaign plus a very brave and successful pitch in front of the “Dragon Den” style Funding Network, Jenni was able to get the Kitchen up and running.

The London Bike Kitchen has a great friendly and open feel to it, promoting a casual atmosphere dedicated to learning and teaching in a way that’s appropriate for the people who come in.

“Men tend to say they can do it and don’t want your help” Jenni says “but sometimes they don’t know what they’re doing or need some direction. So you have to approach them like you’re not really helping. Whereas women tend to think they can’t do it due to [cycling] being a more male dominated sport/interest.”

Due to a variety of classes, everybody is given tailor made advice and help. A team of 4 mechanics teach but Jenni has been learning and is keen to chip in now and again. “I had a mechanic not show up at the weekend so I had to take the class. It went okay bar 1 or 2 questions.”

Jenni dreams of a stable of bikes for every situation,  currently armed with a road bike and a more traditional retro sit up bike. She is a fan, like we are at the DC, of clothes you can cycle in, that are ideal for everyday life highlighted by the fact her own style on the bike is dictated by what the day and weather has in store. Comfortable in jeans or wearing a skirt (even riding a road bike) Jenni enjoys her time cycling, it’s her means of commuting and getting about. 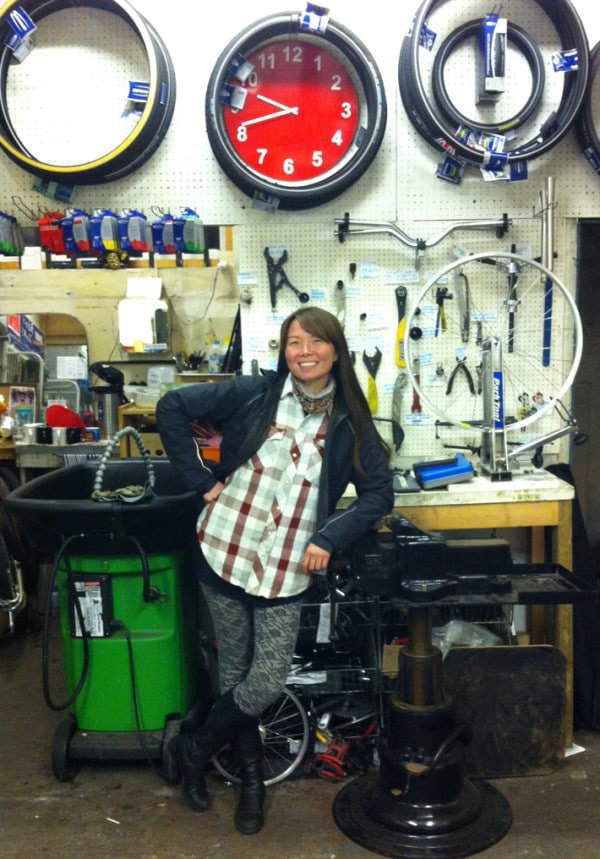 Not a great lover of the hi-vis vest style to stand out, she prefers wearing stylish, strong coloured clothes to be noticed, “I usually wear bright Hawaiian shirts or I have an orange jumper or brightly coloured socks from American Apparel.”

Talking to Jenni you can tell the fantastic passion she has for the LBK, cycling in general and for getting people, not just pedaling, but maintaining and building their own bikes. She really has an intoxicating cloud of enthusiasism that wraps around you when speaking to her about these workshops she’s set up, and for good reason too. She’d been told it would be hard to set up, to get going, to find a space for the workshops but, mainly on her own, she hasn’t given up, pushed through and now she’s got what she set out to create.

Due to launch fully by next spring, the London Bike Kitchen is open now for weekend workshops. You can learn more about them and book here. There’s also a membership scheme that you can sign up for outside the workshops but allows you automatic membership when you go on one of the courses. Ranging from beginner to advanced, LBK is a fantastic opportunity to get involved in the cycling community and get on your bike. Your bike, the one you built.

For more information on the London Bike Kitchen, click here. 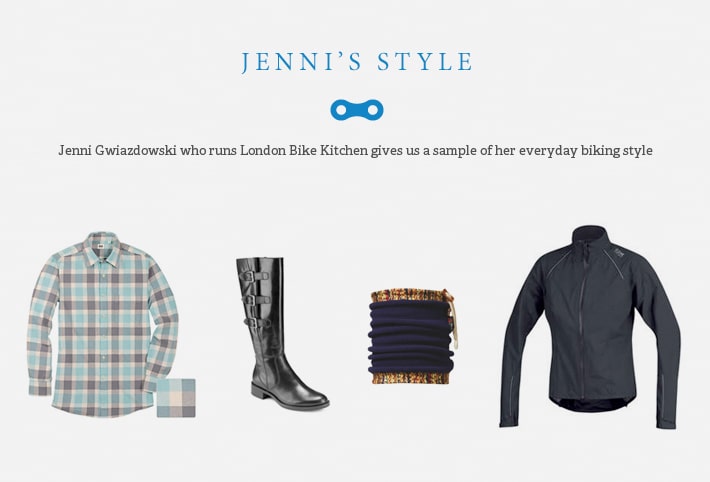 The flannel shirt is from Jenni’s dad –  but similar here.

The neckwarmer is a Buff

The jacket is Gore Bikewear

Our sketch above was inspired by a picture in this great interview with the London Bike Kitchen from the brilliant CycleLove blog.