How Common is Bike Theft? [STATS]

If you’ve ever had your bike stolen, you’ll know how stressful and upsetting it can be. If you’ve never been a victim of theft – count your blessings!

Bike theft in the UK is rising rapidly – but by how much, and is it really a cause for concern?

Let’s look at what’s been branded the “bicycle theft pandemic”, and see how us cyclists can keep a closer eye on our rides without keeping them under lock and key forever (just sometimes!).

How Often Do Bicycles Get Stolen?

In Britain, it’s an average of one every six minutes. That’s ten an hour, or two hundred and forty a day.

There are also several hotspots around the country that see a continuous level of theft, even when the national figures fall. London, for example, is considered the number one hotspot for bike theft.

Between April and November 2020, the capital saw its highest ever number of reported theft, with a staggering 113,000 bikes stolen during the period.

This decline in the number of reported thefts is promising, but there’s no denying that bike theft is still a widespread issue. Crime rates may be falling, but the fear amongst cyclists isn’t going anywhere.

Where Are Most Bikes Stolen From?

According to data from the Office of National Statistics, more than half (54%) of all reported bike thefts were from the home.

This also includes “semi-private” areas from around the home, including garages or car parks that surround the home, but are not directly connected to the premises.

In 2019/2020, around 14% of bikes were stolen from “grounds of a public place”, including local shops, supermarkets, gyms, pubs, football clubs, and more.

Another 5% were stolen from outside the workplace (or the workplace car park), and another 9% were taken straight from the streets.

The moral of the story? Your home may not be the safe haven you think it is. This is what makes the right protection and security for your bike so important. Bike thieves are brazen and shameless – don’t be fooled into thinking your ride is untouchable just because it’s secured on your property.

What Type of Bike Is Stolen Most?

Any unlocked bike is a primary target for thieves. However, since around 2015, big names like Specialized and Carrera have been amongst the top brands stolen in the UK.

‘Specialized’, one of the biggest names in the industry, is renowned for making high quality, high-value bicycles. Their mountain bikes are a particularly lucrative steal for UK bike thieves. One quick look on the ‘stolen bikes’ page on Bike Register reveals hundreds of stolen Carrera and Specialized bicycles, most of which are e-bikes or mountain bikes.

E-bikes are growing in popularity, and their high price tags make them a primary target for thieves. In July this year, 15 electric mountain bikes worth more than £30,000 were stolen from the New Forest Cycling Storeroom. This is just one of the many stories of high-value bike theft reported across the country.

Why Is Bike Theft So Common?

Bike theft is so common (and so hard to stop) for three main reasons: there’s minimal risk, few defences, and lucrative rewards.

We already know that just 5% of stolen bikes are returned to their owners. Thieves can be difficult to trace, especially if there’s no CCTV in the area or if the bike isn’t registered on a database. The incentive for police forces to catch these criminals is low, and proof of ownership can be tough to establish.

Ultimately, the risks for thieves are minimal. The rewards, however, can be large-scale.

Most stolen bikes are sold soon after the theft. Some bikes can make thieves thousands of pounds, especially high-end e-bikes and mountain bikes, which can come with some seriously eye-watering price tags.

Another factor is the lack of accessible defence technology. Secure, heavy-duty locks can cost a bomb, and the cheaper options can be easily broken with minimal force. GPS trackers are rising in popularity. However, they do nothing to prevent thieves who want to strip bikes for parts.

What Is The Punishment For Stealing a Bike?

In the UK, theft of a pedal bicycle is punishable by a maximum penalty of seven years imprisonment and/or an unlimited fine.

Guidelines from the Sentencing Council state that these penalties and punishments may differ. First, the courts must decide the offence category. This is done by determining the level of culpability, which depends on whether the theft was planned, if physical force was used, and other factors.

Then, the amount of harm caused to the victim (measured through financial loss) will be evaluated. Bikes of substantial monetary worth will carry harsher penalties and vice versa.

The courts will then determine which fine (if any) is applicable, based on further guidelines from the sentencing code, and community orders may be enforced instead if the offence is considered less severe.

Now we’ve covered the sobering realities of bike theft, let’s take a closer look at how you can prevent yourself from becoming just another statistic with the best bicycle theft deterrents.

A secure lock is an absolute must for any cyclist. Sold secure diamond rated bike locks are some of the most secure on the market. This certification makes them the highest certified level of bike lock security. They usually come with a metal thickness of between 14 and 18mm, and weigh anything from 3 to 18lbs. 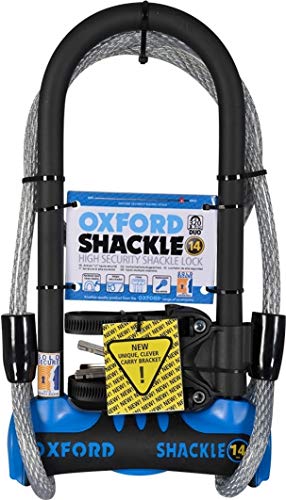 Most GPS trackers are so discreet that thieves won’t be able to locate them. Many are hidden inside handlebars, disguised as bike reflectors, or under bike seats. You’ll receive movement alerts and be able to track your bike’s location on a mobile app.

It’s one of the most efficient ways to track your bike, and you’ll be able to send the location directly to the police, so your chances of finding your bike are massively improved.

One of the best deterrents doesn’t even come with a price tag. You just need to be aware of where you’re locking your bike up. Choose a place where many other bikes are already locked up – busy locations are more likely to have CCTV and witnesses – two of the most valuable theft deterrents.

Make sure you lock your bike against an immovable object too. You don’t want a thief to take off with the object your bikes attached to if they can’t crack the lock. Cemented bike racks or railings are two of the best options you can go for.

Finally, make sure you keep your lock off the ground! The closer your lock is to the ground, the more opportunity the thief has to crack it with a hammer and take off with your ride. Locks positioned further up the bike, ideally around the down tube or seat tube, are far less likely to be forced off.

Alarmed locks are a reliable deterrent for high-value bikes. Many alarmed locks are Bluetooth operated and controlled via an app on your phone, and they can instantly alert you if the lock has been triggered via a push notification. Many also omit some ear-piercing alarm sounds (some reach 100dB!) – what better way to deter thieves?

Although demand for bike components has soared, most parts are in short supply. As shortages push demand higher, rates of bike theft rise, so it’s more important than ever to get yourself clued up on all the latest tips and tricks to secure your ride.

From anchors and padlocks to trackers and alarmed locks, make sure you’re doing your bit to protect your bike, your safety, and your peace of mind. 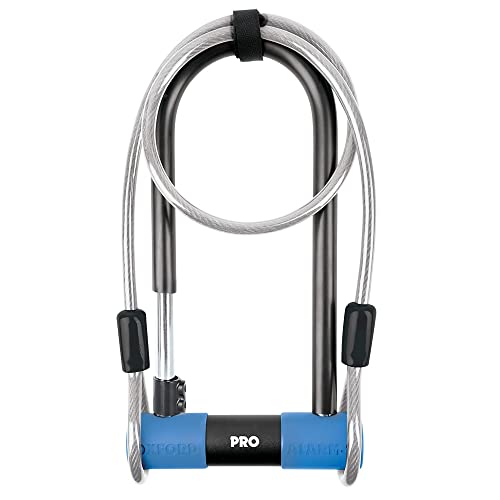 Bethany is a freelance content writer and avid outdoor adventurer from West Sussex, England. She travels everywhere on two wheels and writes about anything from government policy to marketing and sports. You can see more of Bethany's work here