Why the Bicycle Thrives During a Crisis

The bicycle can be seen as a token of events which dominated most of the civilised world for the past 200 years.

It has facilitated society’s development, has shone as the steed of pioneering racers and new adventurers, advanced feminism, delivered socialist principles via a network of clubs, risen as a counter-culture emblem for post-war environmentalists and anarchists and must take its place as the most efficient form of active travel we will ever see.

We are in a period of human development which sees us reeling from the folly and greed of the industrialist and capitalist years.

At every turn we see backlash, privilege, environment, politics, entrapment and inequality.

Those polemic forces who have vested these interests against each other during the lifetime of the bicycle have rarely, or unimaginatively, sought succour in their arguments via this most egalitarian machine.

Crucially, all of our commonly trusted bodies, along with academic and medical experts, cannot find anything other than positive, supportive benefits of cycling which actually adds to overall wellbeing.

The bicycle moves us all forward.

Cycling is a great way to make a positive contribution to change immediately and recognisably.

Our youth is curated by it, giving us a first shot at freedom and independence and instilling triggers of self-propelled joy that we carry throughout the rest of our lives.

The memories of that social movement around the neighbourhood spurred many during the Coronavirus (COVID-19) pandemic to get back out onto their bikes and escape the entrapment of lockdown rules.

Cycling was one pursuit not held back by proximity codes. Gyms were closed, swimming pools were still. The two-metre distance required between contacts was automatically achieved on a bike ride with friends.

In the spring of 2020, urban centres, once suffocating for non-motorists, became open as employers began to send their workers home. Looking at the same four walls for longer, especially for the increasing number of people hemmed in by boxy apartments close to the centre, felt post-apocalyptic.

So the people started getting out more and turned to the bicycle as they once did, before the motor car became one of the primary causes of malaise and inequality.

According to the New York City Department of Transportation, the East River section of the city saw a 50% increase in bicycle use in March of 2020 compared to the year before. This was at a time when public transportation was still operating.

Choked cities like Bogotá and Mexico took up the mantle and introduced hundreds of kilometres of cycle specific lanes at the expense of the motor car.

People could have opted to use the subway or expressway still, but many took the better option. Thought-processes began to shift toward how making a journey under their own steam would take pressure off the public authorities. The roads were safer because there were fewer cars, but please join the dots of kindness in others attached to choosing to take the bike to work.

In the UK, an open letter signed by over 100 academics, researchers and medical experts called on the government to enable safe and active cycling and walking during the pandemic.

Using the bicycle can move away from being niche, or weird, or requiring space-age unflattering clothing materials. It needs to become a way of life in more countries. Open letters and debate all enrich the idea that routes can be shared and riding can be a form of transport as well as fitness kick.

Active travel campaigns launched the world over sought to move the debate about the positive forces for cycling into the mainstream. Motoring investment is shrinking and it is being suggested that using the car for short journeys may need to become as antisocial as smoking in order to shift the dial permanently.

Unfortunately, to many groups it felt that the changes were introduced via the back door and under the secrecy of an empty road network with fewer drivers ready to complain. That fact masks the introduction of active travel proposals dating back to before the pandemic when travel commissioners such as Chris Boardman delivered reports to the Mayor of Greater Manchester outlining why the devolved body needed to improve the lives of its citizens.

The pandemic did not create the need for a change to most lifestyles, but the fact that the virus was more dangerous and effective in the bodies of overweight and unhealthy individuals was an inescapable truth.

The reporting and promotion of these facts provided a further catalyst to people to pick up the bicycle and shed the excess pounds. Other facts about the benefits of cycling started to rear up in people’s consciousness.

The UK Department for Transport reported that the health benefits of cycling outweigh the safety risks by a factor of 20 to one.

The Organisation for Economic Co-operation and Development (OECD) reported that people cycling to work have a 28% lower mortality rate than the average population.

The politics of transportation exploded with the onset of the postwar growth of the motor vehicle. Mass-production, advertising and the policy of putting the car at the centre of a nation’s development created counter-culture and protest.

The bicycle became a symbol of anarchy and campaigning, especially with the shift in the social mobility of populations. In a quick turn of the pedals, the pedestal of environmentalism could also be shared by those who would rebel against the car. 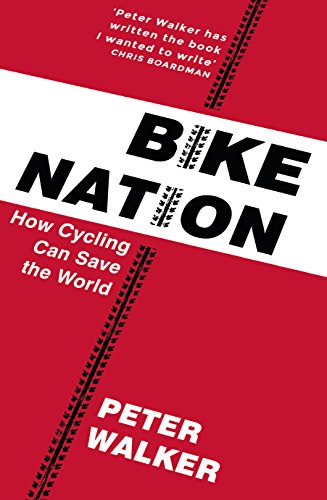 Bike Nation: How Cycling Can Save the World
−19%
Check Price

Thinking about the environment today keeps the car and the bicycle at each end of the cultural and social spectrum. With fuel prices at record highs, the conflict in Ukraine squeezing supply and OPEC countries dipping into their reserves to control the price of oil, the world feels like the axis could be at a tipping point towards alternatives to four wheels.

The relative financial cost is increasingly a consideration. The UK Department of Transport said that in 2017, 67% of all journeys were less than five miles. Cycling accounted for just over one percent of the total distance of those journeys. If all of those journeys by an average motorist were carried out in my relatively efficient diesel car and were switched to a bike, I would save over £220 per year at current pump prices.

Pressure is mounting on governments to provide alternatives. Governments will argue that the freezing of fuel duty helps motorists. Natural resources are running out. Fracking is returning to the political stage. The cost of electric vehicles is three times that of those with combustion engines. Supplies of cars are being hampered by lack of raw materials. The cells in the batteries of electric cars are seen to be environmentally unfriendly. There are too few charging points in the UK and we see three pin sockets in the front of houses dangerously extending their cables across footpaths whilst charging cars. Parking your car in the city is a lottery. The polluted air in our cities is killing us.

Groups arguing against the bicycle are being marginalised by some of the wider goals of society who are prising open the cracks in thinking and bore witness to cleaner air and the improved lifestyle within cities that improved their active travel and limited urban journeys by car.

The bicycle can and should be accessible for those short journeys we all make every day. Bicycle lanes which popped up in the pandemic are still here. Commuters can now spend more parts of their journey on segregated, kerbed lanes and road laws are shifting in their favour.

In the UK, a new hierarchy of road users brings more protection to the most vulnerable. Motorists’ duty to cyclists increases, as does cyclists’ duty to pedestrians. We wait to see for the first test of this in law, where a strict liability will determine blame against those required to give the most care.

This should mean more awareness and preparation for unexpected eventualities. All of this requires a lowering of speed, more consideration, more eye-contact and plenty more non-verbal social interaction.

The bicycle is the perfect vanguard to take this message through the streets of towns and cities. Speed cannot be the defining element of a commuting society coming into urban areas any longer. Cyclists are red-light jumpers too and we all share the responsibility of looking out for each other by not being dumb and selfish.

Our urban roads are congested and unequal. The bicycle can level out inequality. In the Netherlands and Denmark, the cycle routes are shared by politicians, students, nurses and royalty. The bikes are heavy, durable and sensible. They are not slick, fast machines designed in wind tunnels. Electric bicycles excel. It’s a way of life there but we should be wary that it is perhaps 30 years or more in the making.

Cyclists elsewhere should take the opportunity to thrive in this new environment but provide more enlightenment to it. Proximity to bicycles and pedestrians is going to take time to get used to. Campaigners for change and politicians need cyclists to be the good guys.

We may need to even rethink what a cyclist is. Our definitions will broaden or shift. Is a fast-food courier the same as a cargo-bike riding parent taking his two kids to school? Will we see a mother moving through urban routes with her children on their own bikes going to an inner-city school?

READ: 12 Places to Find Stylish Clothes You Can Cycle In

Kevin Glenton
Kevin is a NCTJ qualified journalist. He cycles on towpaths, defunct railway lines, national cycle routes and minor roads in order to explore. His home is Manchester, shoehorned in by the Peak District and Pennines. A love for their steep roads remains unrequited.

You can read more from Kevin here

Kevin is a NCTJ qualified journalist. He cycles on towpaths, defunct railway lines, national cycle routes and minor roads in order to explore. His home is Manchester, shoehorned in by the Peak District and Pennines. A love for their steep roads remains unrequited. You can read more from Kevin here