16 months ago I reviewed Closca’s first attempt at a folding bicycle helmet, following a successful crowdfunding campaign on Kickstarter. Despite being hopeful of the product bridging a style gap in the helmet market, I was left disappointing with the bulkiness and design of the helmet. It felt like it could have been so much more…

And, on that statement, Closca are back – and with a point to prove. 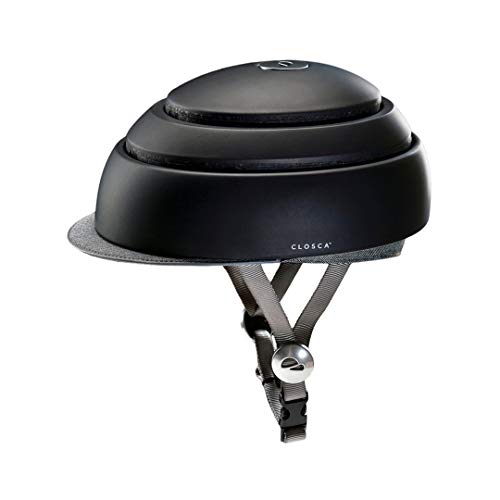 As you can see from the video above, the all-new Closca folding helmet is a much sleeker design. And after getting my hands on one too, the quality is drastically better than the previous model.

The folding functionality is impeccable – just as it was on the original model, in fairness. It takes no more than a second to make the helmet wearable, or flatten it down again for storage. It folds down to around 5cm thick, about half the width of the full size helmet, making it great for stowing away in bags.

READ: 5 of the BEST Urban Cycling Shorts for Commuters this Summer

The helmet has kept an element of the original cap design, offering a subtle bill once again at the front of the helmet – useful for keeping the sun out of your eyes (perhaps more of a problem for those at Closca, who are based in Valencia, than those from the duller climes of the UK). However, this bill is fastened with high-quality Velcro and can be easily removed if it’s not to your taste.

One slight downside of the helmet is that I feel it could be a little more comfortable on the interior, despite its use of some padding. It’s by no means terrible and after a few minutes of riding you won’t really notice it, but it doesn’t match up to ‘sportier’ helmets in this regard – although this balances out overall when you look at the functionality and design of the helmet.

Closca Fuga is made of sturdy stuff. It is also fully compliant with European and American safety regulations.

The Fuga folding bicycle helmet is a huge step forward for Closca. It’s a classy looking product that functions excellently. As I mentioned earlier, the helmet could be a bit more comfortable, but this isn’t hugely distracting or particularly detrimental to the overall product.

This helmet comes in at a fairly substantial €120 (c. £105), but if you’re tired of lugging around a bulky helmet, the Closca Fuga could be worth the investment for you.