Ignore the sceptics – electric bikes are the business. Power over hills, get one over on local traffic, wave goodbye to public transport, and have fun doing it!

For electric bike converts like ourselves, e-bike wattage is one of the first topics would-be buyers hit upon. 500W e-bikes are a popular rating. But how fast can a 500W electric bike go? How far can it be ridden?

In this article, Discerning Cyclist will aim to answer those questions (and much more besides).

The wattage of an e-bike refers to the power output of its motor. This figure can be calculated as follows – bear with us here because this is important – multiply the voltage supplied by the battery (in volts) by the maximum current flowing from the battery to the motor (in amps).

For example, a 36V battery with a 15A controller would have a motor with a 540W output. It’s important to note that different manufacturers may use various methods to calculate the wattage of their e-bike motors, such as the maximum continuous output that the motor can sustain without overheating.

Additionally, it’s important to distinguish between the wattage of the motor and the watt-hour (Wh) rating of the battery. The battery rating refers to the capacity of the battery to deliver a certain number of watts to the motor per hour.

Electric bike batteries usually have a Wh rating of between 300 and 500, though more powerful 750Wh batteries are becoming more common. Some e-bikes even have two battery ports to increase their range.

These bikes are equipped with a motor that is capable of delivering 500 watts of power, which can be helpful when tackling hilly terrain or when you just want to move a little faster.

Perform a quick tinkle on the keyboard and up pop plenty of websites advertising the best 500W e-bike, the one with the longest range or even the one with the fastest acceleration. So which is best? Read on to look at 500W electric bikes in detail.

How Fast Does a 500W Electric Bike Go?

At double the most common wattage for electric bike motors, 500W electric bike’s are fast – most will comfortably offer assistance over and above 20mph, with some even reaching 25mph.

But before you get too excited, you must be mindful of the relevant electric bike laws in the country you’re riding in – the top speed limit being a critical one.

In the United Kingdom and the European Union, electric bikes, also known as “electrically assisted pedal cycles” (EAPCs), are required to have a maximum continuous power output of no more than 250W. They should also not assist when over speeds of 15.5mph.

In the United States, the rules regarding the power output of electric bikes vary by state, but the maximum is generally 750W, with the accompanying maximum speed threshold set at 20mph.

The top speed of a 500W electric bike will vary from model to model. The prevailing riding conditions will also impact the bike’s top speed.

That said, it would be safe to assume that most 500W electric bikes (if not restricted by law) will have a top speed figure north of 20mph.

A larger capacity battery means you can go further on a single charge, which can be helpful for longer rides or for commuting to work.

But with a hungry motor to power, many 500W electric bikes won’t have a huge riding range.

In our straw poll, every 500W electric bike we surveyed had a riding range between 25-50 miles. Good, but no better than an electric bike with a standard 250W e-bike motor.

Hills are the bain of many a city or commuter cyclist. But with the rise of electric bikes, even the steepest of inclines are not only rideable but fun to tackle.

With the gutsy power of a 500W e-bike motor, hills feel no more than an inconvenience on the way to your destination.

Of course, hill climbing performance will vary from rider to rider and motor to motor, but it’s safe to assume that a 500W will perform well on the average hill.

Ultimately, the best wattage for an electric bike is a matter of personal preference. Some riders may prefer the highest wattage available, while others are content with a lower-wattage motor.

Experienced cyclists may find that a 250W motor provides sufficient power, while those new to cycling or seeking quick acceleration and hill-climbing capabilities may prefer a higher-wattage motor.

And, as we’ve already seen, not every 500W electric bike motor is alike. Some have been tuned for top speed, some for hill performance and some for instant acceleration.

The best way to determine the right wattage for you is to test-ride a few different electric bikes before making a purchase.

What is the Difference Between a 500w and 1000w Electric Bike?

Clearly, the gulf between a 500W electric bike and a bike with a 1000W motor will be notable.

At 1000W, these are some of the fastest electric bikes available today. 1000W electric bikes will deliver powerful speed performance, excellent climbing on hills and better assistance for heavier riders.

However, speed isn’t everything. Most 1000W electric bikes are not the lightest e-bikes around. With a gutsy, watt-hungry motor and a larger capacity battery to power it, there’s a weight penalty to pay when riding a 1000W e-bike.

Some 1000W electric bikes are sold with two batteries to compensate for the extra power required, but again, this will make the overall e-bike much heavier.

When it comes to choosing between a 500W electric bike and a 1000W e-bike, it will be a trade-off between overall price, top speed, riding range and hill performance. Your requirements may differ from the next person, but in our opinion, a 500W electric bike offers a happy medium.

Aventon’s Pace 500 is, as the suggests, a 500W electric bike. A hybrid or urban e-bike, the Pace 500 will suit most riders looking to get around at a good lick. The quoted top speed by Aventon is 28mph. The average riding range of 40 miles is acceptable too. The Pace 500 comes in two colours and two different frame sizes.

Gocycle electric bikes are some of the most recognisable around. The Gocycle G4 is the brand’s base model, but with its proprietary motor, enclosed drivetrain and quick-fold, this is one fine e-bike. For customers in the UK and EU the front motor hub is limited to 250W, but for customers in the US this rises to 500W.

Third on our list of the best 500W electric bikes is the S1 from Super73. Super73 define it as an ‘urban cruiser’ – an e-bike with an armchair saddle, eye-bulgingly wide tyres and motorbike-style riser handlebars. If there’s one bike in our list that’ll get you noticed it’s the S1! This bike is for pottering around town, perhaps not the daily commute – the moto-inspired look does add weight to the bike and the riding range is quoted by Super73 as just 25 miles.

The first three electric bikes on our list all have e-bike motors placed in the hub of a wheel. The Centauri from VVolt is different. It has a mid-mount or crank motor. These motors are lauded as the most natural to ride, delivering pleasing assistance, without feeling like your shoulders are being pulled out of your sockets. This e-bike is great for commuters. The ‘Stepless’ gear shifting is ideal when having to stop and start – the hydraulic disc brakes will help here too. Plus, there’s a Gates belt drive rather than a normal chain. It’s hard-wearing, quiet and won’t require much maintenance.

Flyer’s M880 slips in to make the last spot on our list of the best 500W electric bikes. Whilst it’s not an all-out load-lugger, the M880 is an electric bike with the ability to easily carry a child on the rear carrier and an office bag on the front. As such, it’s a great bike for a family looking to take a small child to school, carry out the weekly shop or generally get around without the need for a car or public transport. The onboard 500W motor is equipped with a 685Wh battery. Quoted range is between 30 and 50 miles.

Overall, 500W electric bikes are a solid choice for those who want a little extra power and a longer range from their ride. Just be sure to consider the weight of the bike and any local laws or regulations before making a purchase. 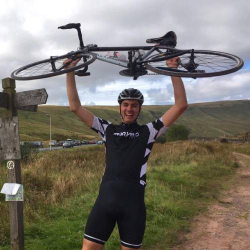