US Comedian Jerry Seinfeld once said, “There are many things you can point to as proof that the human is not smart. But my personal favorite would have to be that we needed to invent the helmet. What was happening, apparently, was that we were involved in a lot of activities that were cracking our heads. We chose not to avoid doing those activities but, instead, to come up with some sort of device to help us enjoy our head-cracking lifestyles.”

I assume most of you, by virtue of the fact you are reading this, are guilty of indulging in a potentially head-cracking lifestyle. As such it is important to have a helmet to allow one to continue in this indulgence.

LIVALL sent us their C20 smart helmet (available for around £69.99) and is squarely aimed at the head-cracking activity that is the urban commute.

That said, it also has some other fancy features…

This helmet’s USP is the fact that it contains myriad technological features to make the commute by bike (or indeed electric scooter) safer.

The most obvious of these features is the strip of LEDs on the back of the helmet. These seven LEDs are relatively bright and can be on a variety of flashing and static settings.

Additionally, because of the inbuilt accelerometers, the helmet can detect when the rider is slowing down and increases the brightness of the LED strip at the back functioning as a brake light for your bike.

In testing, my riding companion informed me that this worked about 70% of the time when tested on a ride around the city centre. While not fool-proof, it’s still a useful safety feature.

Not only do the lights have brake light functionality but LIVALL also boast of an adaptive lighting feature. In this setting, the LEDs only turn on if the ambient light level falls below a certain level, useful for those winter commutes when somehow in the space of 5 minutes the sky goes from blindingly bright to pitch black.

When paired with the app (more on this later), the designers have allowed another feature to be utilised. If the helmet detects a sudden movement with no secondary movement following it, it interprets this as a crash and starts a 90 second countdown. After this it will send GPS coordinates of your location to a pre-set emergency contact.

You can see our rigorous testing method below and the sheer variety of experimental setups employed. After what can only be described as the epitome of good science, it was ascertained this feature worked in roughly a third of our ‘crash’ tests.

It did, however, decide to alert my emergency contact that I had fallen off when I put my helmet down at the end of a ride, nothing like a false alarm to invoke a panicked phone call from my mother (aka my emergency contact). There is an option to cancel the message in the 90 second timer.

LIVALL Helmet – But a Smart App?

If LIVALL were aiming to programme a slightly rampant Artificial Intelligence when they created the companion app to this helmet, they definitely succeeded.

In many ways this app is the weakest part of the whole package. At times it felt easier to get a refund on a ticket from Bryanair (name changed for legal reasons) than to try and bend this app to my will.

When it worked, it did the job fine but this was sporadic at best. In terms of aesthetics of the app, there isn’t much to talk about except that it bears more than a passing resemblance to Linux command line.

In terms of how the helmet feels, it fits well on the head due to its adjustability. It is waterproof which was appreciated in the rain, however the whole thing did feel heavy when I got a bit warmer. There are certainly more comfortable helmets out there.

I’ll let you make up your own mind about the aesthetics, but my sister did say it made me look like an angry duck.

In conclusion, this helmet promises a lot with its design and safety features but in many ways fails to deliver the consistency and quality needed to justify the extra expense of the technology.

It delivers a good level of protection and although cheaper non-smart helmets are available, £69.99 for a smart helmet with built-in lights and an SOS system represents pretty good value for money. 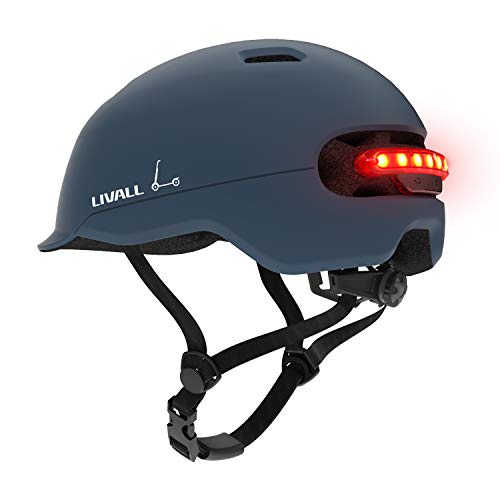