Why I Choose to Ride a Hybrid Bike for Commuting

For a while, I’ve been wondering whether I should get a new bike.

The truth is, despite running an urban cycling blog for nearly eight years (!), I’ve only owned two bikes during that period – and they were both very cheap ones from Decathlon.

My first adult bike was the B’Twin Riverside 100. I think it cost me €129 when I bought it in Spain in 2012. The reason I chose that bike in particular? Well, because I was just over a year out of university and was still broke after buying a car for my first “proper” sit-in-an-office-until-half-five job.

I’d not long moved to Gibraltar for work and was planning on commuting over the border from neighbouring Spain each day. Crossing the frontier into Gibraltar in a car is an almighty pain and after driving in rush hour every day the year before and dealing with the never-ending costs of running a car, I just simply didn’t want to get one. Plus, I wanted to enjoy the endless benefits of riding a bike.

So, I made a little excursion to Decathlon and picked up the cheapest bike I could find.

Now, the Riverside 100 is a simple bike. It’s kind of an entry-level hybrid bike. But the thing that impressed me most about it was just how nippy it felt.

Anyway, for the next two years, my Riverside 100 was my noble stead. Although, it must be said, it didn’t feel particular nippy after a while.

One day, I asked my roommate what he was putting on his bike chain after arriving back from work.

“Lube” he told me. I sniggered. But it turns out your bike needs frequent TLC, otherwise it will start struggling a bit. Like mine.

I stuck with my Riverside until I left Gibraltar/Spain, while another friend inherited my old bike after I left. I don’t actually know what happened to it in the end…

After leaving Spain, I moved to Germany. And for the first year or so, I just borrowed bikes from friends.

But after moving to Berlin, I decided I was ready to buy my second adult bike.

And having not had to run a car for the previous three years, I felt like splashing out.

And splashing out I did… going once again to Decathlon, but this time shooting for front suspension and built-in dynamo lights on the B’Twin Hoprider 500 Urban Hybrid Bike for a whopping €349. Ok, maybe not whopping – but it felt like that after my poorly-treated Riverside.

That was over four years ago now and during that period I even moved back to Spain. But the Hoprider is my trusty sidekick.

This bike is designed for all types of weekly commutes in and out of town. Features front suspension, ready-to-go dynamo lighting, front and back splash guards and a rear pannier rack.

Why I Buy a Hybrid Bike – Benefits

Now, when I bought my second bike, I did put in a lot more thought and even research into what I wanted. Primarily, I wanted a bike that could do and go wherever and whenever I felt like.

For me, that meant front suspension was a big plus. I didn’t want to have to worry about clattering into the odd unexpected pothole, nor feel the vibration of woeful road surface – both of which are commonplace in Spain.

I’d also run into a bit of problem picking up quite frequent punctures on my Riverside (probably because the tyres had worn down and actually needed replacing – the issues actually stopped when I bought a new front wheel after the original was stolen, come to think of it), so I wanted a sturdier tyre that would provide a bit more resistance.

Another key thing that I wanted was the magic of built-in dynamo lights (i.e. lights that automatically turn on when you pedal) as I didn’t want to have to carry around a set of bike lights in my pockets, nor worry about keeping them charged.

The icing on the cake, though, was the pannier rack on the back. I don’t carry vast amounts of shopping and what not, but I find it very useful for even just carrying my Hiplok while I ride. 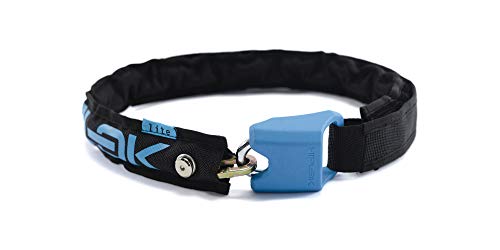 Of course, with all this “practicality” that comes with a hybrid bike, there is of course a disadvantage: weight.

My Hoprider 500 bike weighs about 16kg (2 and a half stone).  This can cause two potential issues: 1) it’s not that fast 2) it’s heavy to carry. [For context, gravel bikes weigh around 11kg, and road bike weigh about 8kg.]

Luckily I no longer live in an apartment, so it’s not like in the past where I used to have to carry my bike up a few flights of stairs every day due to a lack of secure bike storage. So, for me, the weight itself isn’t an issue.

With regards to speed, well, sure it would be great it my ride was a bit lighter and faster. But, to be honest, it doesn’t bother me that much. I definitely prefer the ability to ride easily on trails and the like, even if I’m not so nippy on roads.

In truth, while I’ve learned a fair amount of basic bicycle maintenance since my first Riverside 100, I’ve still made a few critical errors that permanently damaged by bike.

I try to wash my bike with a jet spray every few weeks now and once it’s clean, I apply a degreaser and lube (I don’t lol so much at this anymore) to the chain.

The biggest mistake I’ve made in caring for my bike, though, has been to leave it outside and exposed to the elements too often.

When I lived in Berlin, I used to leave my bike locked up in the building’s courtyard. This meant it essentially spent months in the rain and cold without protection. And, since I’ve been in Spain, I again leave it exposed outside. Rain isn’t too much of an issue here, but when there is a strong wind, a lot of sand ends up coating my bike and getting stuck in the chain and what not.

One thing I would highly recommend to anyone with a new bike and without the capacity to store it indoors is to invest in a decent waterproof bike cover. It will add years to your bike’s lifespan and will make it an awful lot easier to ride in the long run.

I’m starting to think about my third adult bike and I’d be willing to invest a bit more in it, knowing that I have a better idea of how to take care of it now and can start to trust myself with nicer things.

At the moment, I’m leaning to getting another jack-of-all-trades hybrid bike, although I’m also contemplating a nippier gravel bike or even upsetting the purists with an electric bike. We will see…

COMMENT BELOW: What bike do you commute with and why?