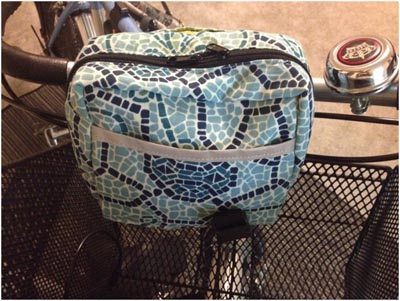 By Elizabeth A. Floyd from the tinlizzieridesagain blog.

My normal “around town” bike has a giant front basket that I brought home to Washington, DC, from Copenhagen, carefully packed in a suitcase. So I don’t really have much need for a small handlebar bag. But a cute blue and green print one from Natril Gear won me over this spring. I need wanted a small, cute purse to take on a bike tour in Europe, something that I could easily attach to a rental bike, then throw over my shoulder or as a crossbody bag to walk around towns and villages along our way. Just big enough to fit my wallet and sunglasses. There are now plenty of options out there now, but the Natril Gear Handlebar Bag had one specific feature that won me over – the clear pocket on the inside of the top flap.

Natril Gear bags were developed by Nathan and April, who cycled 100 days across the United States. All that traveling gave them the ideas for their bags, April told me, when I examined the bags at the National Women’s Bicycling Forum, in Washington, DC. I love the functionality of the bags, but the wide range of fun and bright prints drew me in. As they note on their website, brightly colored anything on a bike makes it more visible, rather than solid dark colors.

The clear pocket on the inside of the top flap means that I can tuck a cue sheet or map inside it, so that I can have the bag on the front of my handlebars and still see the cue sheet. The pocket fastens as well, to keep contents from slipping out. I really love this idea. 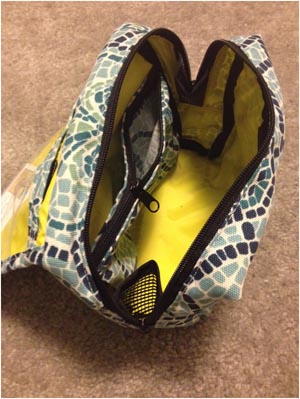 Other features include reflective trim on the outside flap as well as the inside, so if you have the flap flipped back over your handlebars, you still have a reflective strip on the front of your bike. The top two-way zipper means you can zip it closed around an item that doesn’t quite fit, or leave space to reach in for snacks, if you want. The sides have mesh gussets, to keep your belongings safely in the bag, and a smaller zip pocket on the inside is great for stashing lipgloss and sunscreen.

The practicality and cuteness of the Natril Gear Handlebar Bag almost makes me wish I did not have a very useful front basket on my bike, so I could use it more often. But for someone who does not have a front basket, and doesn’t want to take a large pannier, or perhaps wants to add a smaller option to the pannier, this is a great option! 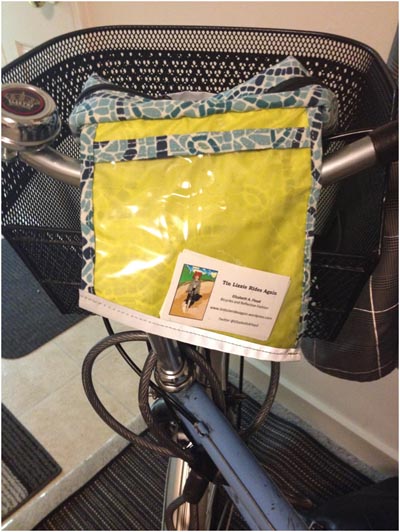