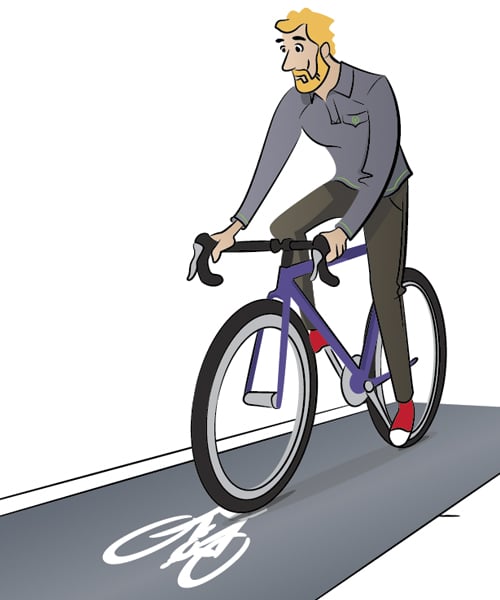 There appears to be some level of a ‘revolution’ going on in the cycling world. It’s a hot topic in the papers and on the news, particularly with high profile accidents involving Messrs Bradley Wiggins, Shane Sutton and Chris Boardman. The idea of how to make cycling a better and safer commuting experience is now of media interest. Finally.

And it’s not just the ‘green’ papers, such as The Independent and The Guardian that are fronting the push, even The Times are leading the charge! Not to mention the BBC and a host of other great cycling blogs and communities.

Questions are being asked of the UK’s cycling system and philosophy. Does the odd cycling lane on a busy road suffice? I’m sure that anyone who’s ever had to cycle alongside a bus, with a van parked across the cycling lane, would agree that we really should be able to do a lot better.

With this in mind, I selflessly embarked upon a trip to one of the biggest cycling cities in the world: Amsterdam. Purely for research purposes, of course…

Now, I knew cycling was popular in Amsterdam, but I’d drastically underestimated quite how so.

Bicycles rule the streets and roads of Amsterdam. Within seconds of leaving Amsterdam Centraal train station I was greeted by hoards and hoards of bikes parked up everywhere. Rarely are the bikes even locked to a static object, such as a fence or lamp post, instead just a lock between the frame and the spokes does the job, with the bicycle then being propped up on it’s leg stand, most of which appear in designated parking areas for bikes. 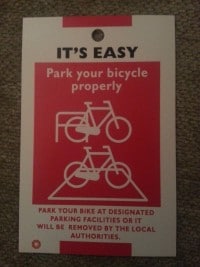 As soon as you reach the main road too, you are greeted with very few cars. You can tell immediately that the main modes of transport in ‘Dam are bicycles and trams.

The bike lanes aren’t just a bit of paint on a road either. They are clearly marked, designated spaces with curved curbs and the occasional small fences to prevent any accidental wondering by pedestrians.

“But what happens the various modes of transport inevitably meet at a junction?” 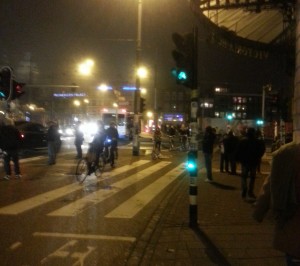 I’m glad you asked. Well they all just have their own traffic signals to adhere to. It seems simple doesn’t it? That’s because it is!

Trams, pedestrians, cars, buses, vans, lorries, lamp posts and bicycles living happily side-by-side in one ecosystem. That ecosystem being one of the busiest city centres in Europe. Shock horror!

But the Amsterdam cycling scene is more than just a few lanes and traffic lights. It’s a different view to cycling, a different philosophy to city life even. 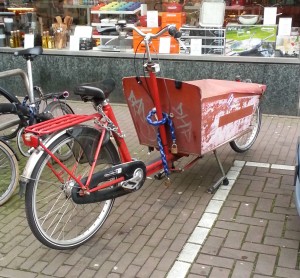 Now whilst I’m not going to be incredibly irresponsible by telling you not to wear a helmet, I don’t think I saw a single cyclist wearing one in Amsterdam (admittedly that does sound like the equivalent to “but the bigger boys were doing it” when you’re a child). Nor do cyclists cover themselves in hi-visibility clothing or lycra. Cycling is just like getting the bus or walking about town in a nonchalant kind of way. There are even parents riding around with their kids sitting in a box at the front of their bike (an example of these kind of bikes can be seen in the picture, right).

I probably shouldn’t even identify people as cyclists in Amsterdam. They’re just people riding bikes in normal, everyday, usually stylish, clothes. At this point it’s probably worth mentioning that everybody seems to have style in Amsterdam; they just seem to radiate it effortlessly. 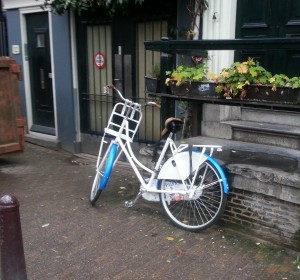 Bikes in Amsterdam don’t seem like designer, racing models either (apparently, as my friends told me, this is largely due to a fair amount of bikes being thrown in to the canals – but we’ll glaze over that point swiftly), instead they are fairly lumpy, apparently cheap bikes. That doesn’t mean they don’t look good though. Because they look great. You see bikes of all sorts in all sorts of bright, bold colours. This simple touch compliments the ‘cycling’ fashion style of Amsterdam perfectly.

What can the UK learn from Amsterdam?

Now I don’t want to sound like I have all the solutions to Britain’s cycling problems, but I really don’t think many of the problems that cyclists have are too difficult to solve.

As I’m sure you’ve heard, cycling is cheaper, healthier, more eco-friendly, more satisfying and even some times convenient than driving, especially in city centres. And all of these fantastic reasons to cycle are on show daily in Amsterdam, we just need to perfect it here.

The first measure I, and many others, believe needs addressing is bike lanes. In their current format in the UK, cycle lanes seem more of a novelty gesture to cyclists, and something that are swiftly ignored when it becomes inconvenient. Cycle lanes need to be separated from roads and pavements, they need to be solely for bicycle use. 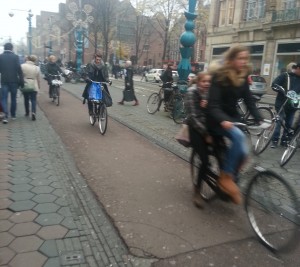 Secondly, I firmly believe cyclists and other road users could do with a series of quality awareness campaigns. When all road users respect each other and the rules, I’m sure we’ll be one step closer to a bike friendly Britain – hopefully getting more people in a saddle!

And with that brief weekend in ‘Dam concluded, I headed home satisfied having seen a cycling city in action. For anybody who hasn’t been to Amsterdam, I would highly recommend grabbing a few days there, it’s a beautiful, unique, wonderfully alternative city.

What else do you think needs doing to get Britain cycling safely?

If you’ve been to Amsterdam, what are your own experiences of cycling? 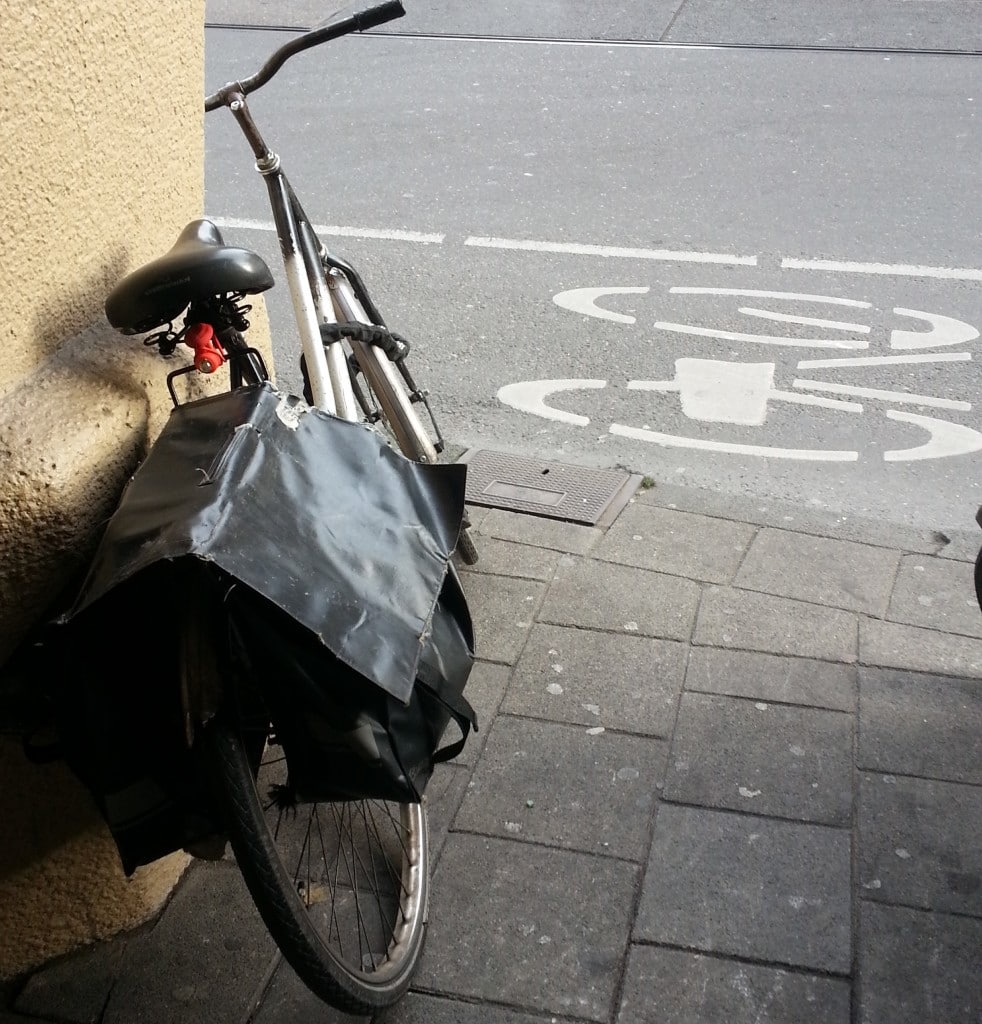