This post may seem more relevant now due to the fact that it’s autumn and it’s been raining – and heavily at that, and we all associate autumn with rain (especially if you live in northern England!). But the fact is, it’s been raining since the spring, so a rain jacket is not just something you need for the colder months, it’s an all year round affair.

With that in mind you need a coat that is tough, durable and of course keeps you as close to 100% dry as is technologically and physically possible. It’s something I’ve been looking at, more in-depth, since the spring and there’s lots out there to suit every budget with a wide range of styles, looks & colours. Since at the DC we like a bit of style in the clothes we wear, so that does kind of tailor this list (no pun intended at first but I kind of like how that works – ahem) and after a good look around, I wanted to highlight 4 coats that are well made, impeccably styled and highly functional. I’ve picked the one I like the most but in short these are all great jackets.

Nau is an American company who craft very fine looking clothes for outdoors. They make their clothes to a particular ethos and ethic that’s really quite appealling. Part of this is to design their products to last and to function perfectly. They use tones and cuts that make their garments fit perfectly wherever they are taken. 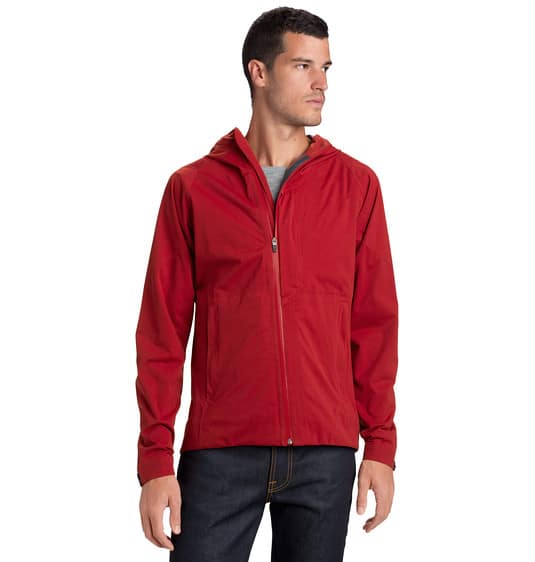 The Nau Shell-A-Tour Jacket is a hard-shell jacket made strong, well tailored coat  designed to be streamlined, maneuvable and give proctection against wind and most importantly, in this case, rain. Made from soft, yet durable, knitted four-way stretch fabric giving more freedom in movement. It’s minimal design and classic look means it’s a smart looking jacket that doesn’t look like it was made for just outdoor activites (in this case cycling).

Importantly its waterproof and breathable so it doesn’t act like a sweat collector when you’re putting in the effort on the bike so when you’re around town later on you’ve not got a cloud of stick following you around and you’re not peeling off a plastic like second skin.

I really like this jacket it looks ultra stylish, sleek and because Nau like to keep things simple there’s no fuss about it. Comes in 2 colour a brighter red (voodoo) or a dark grey (caviar). Not without its draw backs. Being only available from America you have shipping costs. $350 is around £216 so it makes it a pretty big investment to get it over to our rainy shores. Also the hood is not detachable or has a compartment. Hoods will always act like a mini-parachute and are not ideal on cycle jackets but if you’re not going on any races you should be good.

Vulpine is without a shadow of a doubt the first place to think of if you’re looking for stylish attire that looks great no matter if you’re pedaling on a bike or strolling around the shops. It’s been researched and designed to fit that purpose and do all the nitty gritty things that cycling clothes need to do at the same time. Been founded by a cycling enthusiast certainly comes across in the clothing you can literally see the love that’s gone into them and nowhere is that more evident than the Vulpine Cotton Rain Jacket. 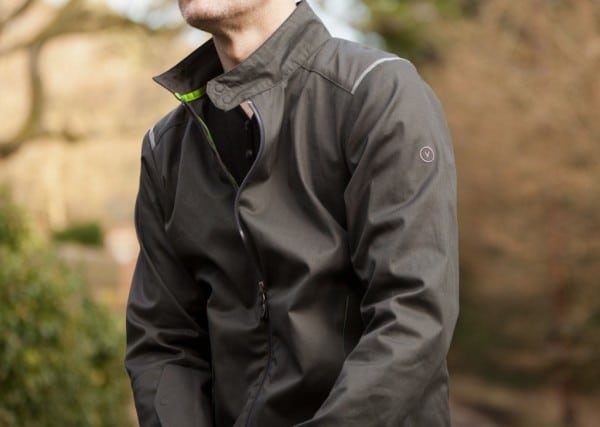 The jacket is made in a painstaking way with Epic Cotton™, abaptly named as it’s handmade and specially coated before weaving. Detail, detail, detail. So you get a finely tailored jacket, based on British tailoring it’ll keep you dry but also is breathable. Like the Nau, you need a rain jacket that is breathable it’s just so much more comfortable and practical.

As this jacket is more specifically designed for cycling it has certain advantages over the Nau jacket in the shape of magnetic neck and pocket closures, magnetic, reflective pull-down splash guard and fold-back reflective cuffs. Almost like a transformer (a bad one as it’s not changing from a lorry into a robot but bear with me) it goes from a cycle jacket to a casual style jacket with these additions. To echo Brian Palmer from the TWMP “one of the finest garments on the market”

Again £195 is a chunk of money but you’re getting a jacket that will last for a very long time so it’s a wise investment. Certainly my favourite jacket at the moment.

Rapha is without a shadow of a doubt the second place to think of if you’re looking for stylish attire that looks… yeah, yeah you get the idea. Simply put Rapha do style very, very well. Beautiful tailored gear that looks and feels quality. They specialise in race gear and urban gear all that has strong design, function and performance. They truly cater for the discerning cyclist. 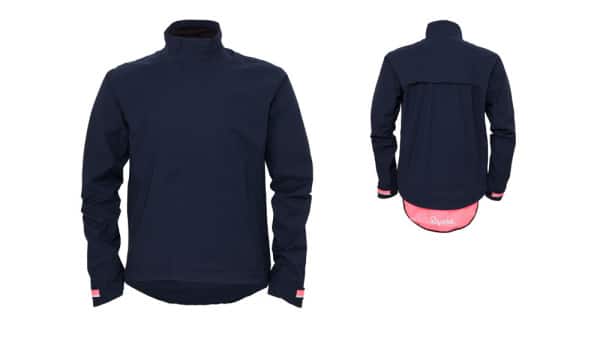 They also sell about seven jackets capable of dealing with the rain so there was a big choice to go with. The one I really, really like is the Mac Softshell but due to it’s price I went for the city rain jacket. Specifically due to it’s finsih and cut. This jacket looks made for the commuter who cherishes the time cycling and this jacket provides great protection against the rain so the cyclist can then cherish his time off the bike later on.

It’s a smartly tailored coat that looks almost like a jumper when it’s zipped up to the top due to its minimal design and waterproofed zipped to one side. Cut and taped to keep the water out, breathable (of course) and the feature I like the best is the jacket has got a low cut at the back but then features a pull-down guard (like the Vulpine) to aid splash backs from the rear wheel even more.

A great, versatile rain protecting piece of cycling attire. Comes in navy and orange. In my opinion the navy is lovely but the orange is just too much, I think red or burgandy would of worked better – sure it works well on the bike to be seen but you never really see anyone walking around town with an orange coat on looking stylish do you. Do you?

Price is a tad higher than the Vulpine but lower than the Nau (after getting it here) but as I’ve said it’s not a just for now jacket.

Howies have most definitely captured the stylish urban look with a range of smart look attire. Not all is suitable for the bike but like Nau they’re gear is made to function well with it’s tasks outdoors and one of those tasks it’s aimed at is cycling. The advantage to Howies is, I’ve said, they have a great style to them. Not as tailored as the 3 other jackets above – more casual looking but that doesn’t mean it’s not as well made and another great plus points is they’re much more competitive on price. 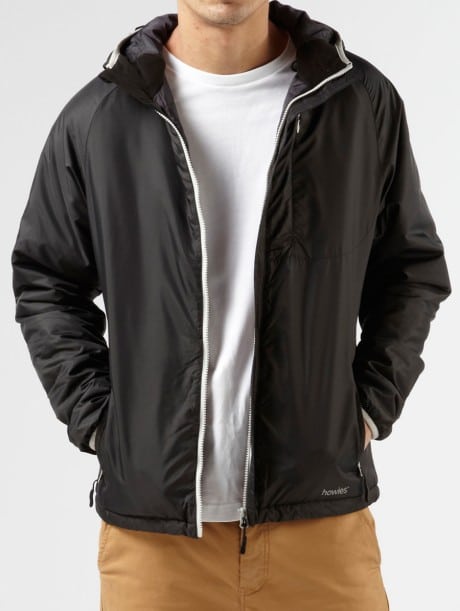 The Whistler Jacket may or may not be as strong against the rain as the other contenders here but it’s still designed for the job. It comes with a Durable Water Repellent (DWR) coating to help rain water just roll off (this coating is also found on the Rapha City Rain Jacket). The Whistler is also insulated for warmth, which is a big plus as on some jackets the rain may not get through but it will still feel cold against the skin and a layer of insulation will be glady welcomed in this occurance.

It looks great this jacket, really warm and well made and has a casual finish but a simple, clean design so it doesn’t look overly fussy. I love the placement of the Howies logo not the standard on the chest but around the bottom of the jacket.

Two colours. Grey and light blue both look really nice however again a hood you can’t take off or put away is a bit of a draw back. For £119 this is definitely the value for money option without comprimising any style. Maybe a little fucntion? I’m not so sure. I think this is a fine jacket that will serve you well during your pedal powered rainy days. 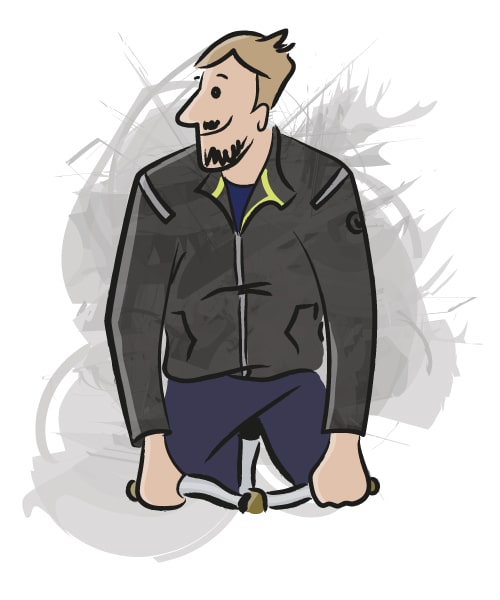 If you could get rid of the hood on the Whistler Jacket from Howies it may of won this honour.

However a jacket that you cycle with that has a hood that you can’t do anything with is always going to have a little bit of a hinderance. I think the Howies Jacket is great value and great looking but I’m a big, big fan of the Vulpine Cotton Rain Jacket.

Everything about it looks quality. It’s tailored and functional. Stylish and strong. From its main purpose to the little details – truly a great, great rain jacket and if you opt for this one I feel you won’t be disappointed & with more colours due to be on the horizon for sure there’s even more reason to invest in this smart discerning piece of cycling attire.